Share All sharing options for: Suns Defense Zones Up The Nuggets: 101-85

You would think that the second ranked offense in the league wouldn't completely fold when faced with the zone defense but that's what happened Monday night in Phoenix.

After a first quarter that had Suns fans frustrated and mighty anxious and left the Nuggets with a 33-24 point lead, the tide went out like a receding Tsunami (too soon?).

The zone. The dreaded zone defense that normally leaves Suns fans and players hiding in fear of the onslaught to come.

"We almost kind of roll our eyes when Coach calls the zone. We don't want to go to the zone because we don't feel we are good at it," explained Mr. Grant Hill. "It hasn't always worked but it worked tonight."

As for why it worked so well (and by well we mean holding the Nuggets to 43% shooting) no one really knows. Hill and Dudley were both surprised that the Nuggets weren't able to adjust to what the Suns were doing.

Goran Dragic had this to say through his swollen lip that had four hairy stitches sticking out of it thanks to an inadvertent Billups elbow, "Sometimes when we play a zone everybody thinks it's just relaxing and all the time coach is repeating that zone is tougher to play than man-to-man. And today every player was engaged, every player was talking and we were just doing great job. If we were going to play like that we're going to be OK."

The Suns bench clearly won this game in the 2nd quarter holding the Nuggets to only 11 points while still managing 33 on the other end. It had to be the best 12 minute stretch for the reserves all season. Right? Can you think of a better period of play for those guys?

The Suns forced 8 turnovers leading to 16 points, out-rebounded Denver 12 to 6, held them to 33.3% shooting, and managed to hit 12 of 20 on the offensive end. The offensive numbers were obviously helped by run-outs after turnovers, but in the half court they did a good job taking advantage of Denver switching by finding Hill and Frye in the post. Those two combined for 13 points. Add in 10 from Goran, which included 2 threes, and it was an all around dominating performance that turned the tide.

Still, as good as the Suns played, and the energy off the bench was huge, the Nuggets also made for a nice patsy and played the part of shrinking violet to a tee.

Coach Karl talked about losing Ty Lawson to a shoulder injury yesterday and having Chris Andersen go out with knee tendinitis after the first half. He was also sure to mention that his team has played four games in five days. Cry me a river.

As for his team's inability to react to the zone, "I can't deny it bothered us."  I would say so.

This was a great win for the Suns. Going 1-1 against the Spurs and Nuggets on a back-to-back set is a success in my book. Holding the Carmelo to only 17 points on 21 field goal attempts and keeping the Nuggets off the line was huge.

Yes, but still it was huge. 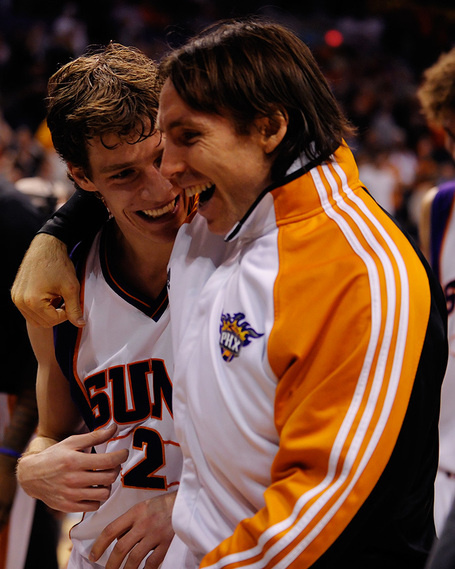 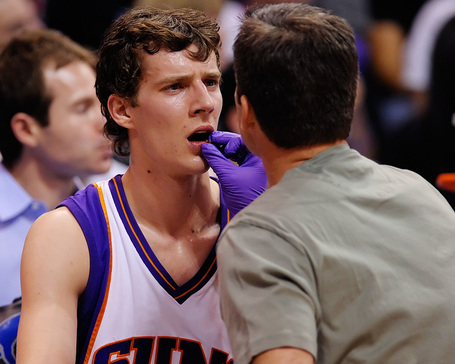