Any time the Lakers come in to Phoenix, it's a show. A showdown. Unfortunately, this remains one of those one-sided rivalries where our hatred (born out of envy) is much greater than their animosity towards us.

It all started with the Lakers bouncing the Suns in their first trip to the playoffs in 1970. Magic and Kareem would go on to own the Suns during my formative years, with playoff wins in '82, '84, '85, and '89. Hence my personal despise of the Purple and Pee. Since 1990, however, the Suns are 4-1 against them in the playoffs with most recent wins in 06 and 07.

Overall, the Suns have played the Lakers more than any other team and are down 88-124 in the lifetime series but Phoenix has done well defending home court (63-42).

The teams are 2-1 on the season with blowout losses for the Suns early in the season (both on back to backs) and a great win during the Suns December slump when the Lakers were without Artest, who had recently fallen down and failed to get back up.

Since the all-star break, the Suns are rolling (9-3) while a very bored and uninspired Lakers team is 6-5. Fortunately for the Suns, the Lakers did manage to break their first 3-game losing streak in the Pau Gasol era with a win over the Raptors on Tuesday. But it took another (the 7th) game winning buzzer beating shot from Kobe to put down Toronto and that was in L.A.

Silver Screen and Roll yesterday broke down one of the Lakers main problems - Derek Fisher's breakdown. Beyond that, they are struggling to find any kind of offensive rhythm which leads to Kobe taking over and ignoring his teammates. Add to that inconsistent play from Bynum, very little production from Artest and a bench that goes one deep (Odom) and suddenly the Lakers are looking in their review mirror at the streaking Mavs hot on their trail at 2.5 games back.

Still, they are the Lakers. They are the champs. They have Kobe, Gasol and Odom. They might be coasting through this part of the season, but they are still the team to beat in the West.

With the Suns coming off all this rest, they are going to need great defensive energy to start the game because shots likely will be difficult to come by. Staying tight through the first quarter with rebounding and D will be key.

From there, hopefully the bench can come in to start the 2nd quarter and give the team a lift until the starters find their stroke.

Keys to the game

Leandro decided he's not ready to play so he's inactive for this game.

Coach said the they will really miss Channing against LA b/c he can pull Gasol out of the paint and let Amare iso on the slower Bynum. He hinted that he would go small - perhaps with Hill and Dudley at the 3/4 to try and create some mismatches.

Gentry was very clear that if it comes down to an end of game situation, he would run two or three guys at Kobe to prevent him from taking the last shot. Gentry called him the best clutch shooter ever - including Michael Jordan

The podKast interview I did with the Brian and Andy Kamenetzky of the Land 'O Lakers of ESPN LA is posted. Just click that link and the podKast is on the right side in a box. And by the way, the told me they spell "podKast" that way (even though it's spelled the right way on their site).

Or you can just listen to it here:

Here's a couple more great Max Simbron photo's of our last meeting with the Lakers: 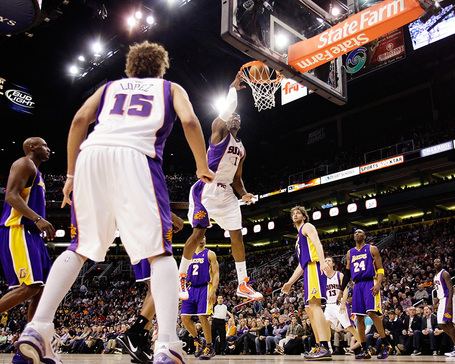 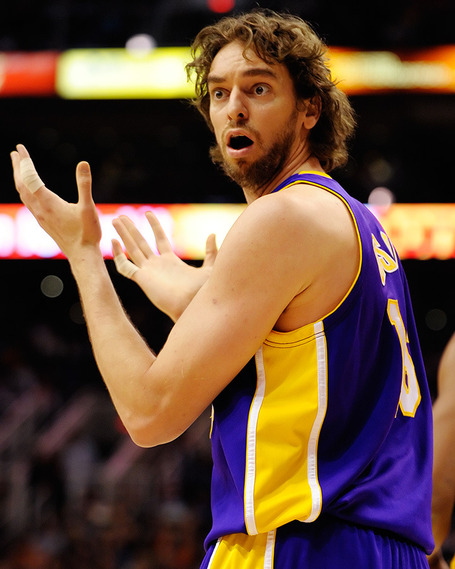