Tale of the Tape: Robin Lopez vs Andrew Bynum

Share All sharing options for: Tale of the Tape: Robin Lopez vs Andrew Bynum

Coach Gentry was having no part of it when I asked him how important the Robin Lopez - Andrew Bynum match-up is. He talked about needing a team effort, especially on the defensive end and then he went on and talked for two minutes about how great Kobe is. Respect.

Still, I think this is a fun match-up. Without Channing, we won't get the full Suns effect of the one-two inside/outside punch but we will get another peek at where Robin is in his development.

CAUTION: This is just one game. One small pop quiz in a long education process (but it is a fun one).

Robin said this about the match-up, "Obviously he's a very talented player. Very physical. I think I got to keep him from catching it too deep and getting too close to the basket."

Tale of the Tape: 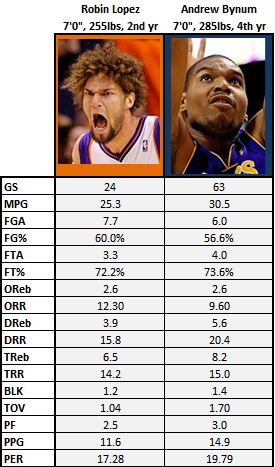 *stats from Hoop Data and Basketball-Reference.com

I was most surprised that Robin is getting almost two more field goal attempts per game. Perhaps that's because he's a better offensive rebounder and those are coming from put backs. That probably also accounts for the high FG%.

Where Bynum excels is on the defensive glass where his D rebounding rate is significantly higher than Robin's.

For all the hype that Bynum gets (as a fourth year player), Robin's numbers compare very favorably with a lot less experience.

Lets get ready to rumble!!!