This was always going to be a tough game and without Frye the Suns did well to make a contest of it. The killer was the second quarter and first half of the 3rd. The Lakers had their way with a stagnant Phoenix offense on one end and a generous zone defense on the other. Phoenix went 5 for 23 in the second and were outscored 29 to 15. That's tough to come back from, but with a bit of toughness and verve the home team did manage to take a brief fourth quarter lead but couldn't bring it home.

Not a huge loss in the greater scheme of things. The Suns showed some fight including Gentry sacrificing some dollars to stand up for his guys - he got tossed arguing for a Flagrant after a hard foul by Gasol across Lou's face.

The turning point in the game came with about 4:30 to go in the 3rd when Amundson came in for Robin with the Suns looking up hill at a 15 point deficit. Lou was amazing on both ends finishing with 11 points, 10 rebounds and 4 blocks. Amare had an incredible 17 point, 8 rebound first quarter but was pretty quiet for the rest of the game. Robin was a ghost and Jason missed a ton of open threes.

You have to also credit the Lakers defense that gave up 31 points in the first quarter and only 65 for the rest of the game.

Tough loss, but not the end of the world....just a small step in that direction.

So much for Robin coming out and showing the world how far he's advanced. He picked up a very quick foul trying to help

on Gasol. He left his feet going for the block and Pau - that savvy Spaniard that he is - jumped into him. His second foul came when he tried to block Kobe's shot just a few minutes later. With Robin in foul trouble just five minutes into the game, Gentry was forced to go to Jarron Collins. Nothing against Jarron Collins, he played well, but still he's Jarron Collins.

That hurt and Robin never recovered. He finished the game with 6 points and ZERO rebounds while Bynum went 8 for 12 with 9 boards. Plenty of those points came against Suns without 'fro's and there were a few hints at how effective Lopez can be in this match-up but overall he played a crappy game.

The funny thing is that despite Robin having ZERO rebounds and only playing 18 minutes and not having Channing the Suns still managed to out-rebound the Lakers 43-40, beat them on the offensive glass 14-12, and had 19 second chance points to to their 20. The Suns also won the points in the paint category 44 to 40. All-in-all not a bad performance against the mighty giant Lakers and certainly a point of pride.

What killed the Suns on the offensive end was 6 for 21 from three. Both Nash and Jason missed plenty of open looks - they combined for 4-15. That allowed the Lakers to get away with collapsing on Amare's drives after the first quarter in which he had 17 points on 11 shots. He finished with 29 points on 22 attempts which meant he went 4 for 11 in the final 3 periods.

I guess you can blame that poor shooting on the excessive time off. Even Coach Jackson said that it is hard for teams to stay sharp with all that rest.

The Lakers offense got something they've struggled with all season - balance. All of their starters, including Fisher, had at least 15 points. Gasol and Bynum were super efficient with a combined 65% shooting. Kobe had a less than stellar 7 for 16 night from the field and was 1 for 5 from three but he added 10 rebounds and 8 assists to give the dreaded all-around game. There were times when the Suns doubled him too soon, in my opinion, and encouraged him to be a play-maker.  I would much rather see him be selfish. I think sometimes this team gives him too much respect on the court.

The benches each dropped in 18 with Lou leading the charge with his 11. Goran only had 4 points but was starting to be aggressive when he was benched for Nash in the 4th quarter. At that point the Suns were down 3 with 6:46 to go. The Lakers then went on a 9-1 run to put the game away. There are times when Dragic is too deferential to his teammates. I think he's still learning to recognize when he's the best option on offense. It's the difference between being a 6th man spark and starting point guard. It's understandable that he's struggling with that but we've seen several games where he's carried the offensive load to good results and I would like to see more.

When Lopez went out, the Suns went to the zone defense against a Lakers team that doesn't shoot the ball well from three. It worked for awhile but as is prone to happen, the zone wore out it's welcome.

Jared Dudley, my go-to source for all things zone related, said this, "At first I thought it went pretty well in the first quarter and beginning of the second. Like any good team they made an adjustment and hit some big threes..I thought all in all it was effective. I just thought you have to get in and get out of zones and give them different looks."

After starting the game with such great energy and effort it looked like the Suns were well on their way. The went into the 2nd with a 31-24 lead. The bench did their job and played the Lakers even for a good 7 minutes. Each team had only scored 9 points by the 5:25 mark when Artest hit a big 3, Dragic missed a shot followed by 10 footer for Bynum. That cut the 7 point lead down to 2 by the time Nash and Amare checked back in.

"We just lost our rhythm. We had a really nice rhythm and flow going and we just kind of got stagnant. We missed some shots but more than that I thought we lost the tempo and rhythm and we couldn't get it back until the second half," Nash explained.

Steve said his back and abs felt much better tonight. He wasn't playing with the stiffness he'd experience in recent games but he was sore from the work he did this week with his physio to fix those ailments. He said he was looking forward to getting more spring in his legs which he hoped would carry him through the rest of the season. We'll just have to watch and see how he feels on Sunday against the Hornets. I don't think resting him anymore at this point would help in the short term and you can't afford to shut him down for an extended stretch of time.

That lack of "rhythm" carried over for the first seven minutes of the third. The Lakers built their 7 point lead to 15 during a stretch that saw the Suns hanging their heads and playing poorly. In came the hero of his game, Lou Amundson. "I think we started the second half lackluster and we were kind of lacking energy there in the first few minutes. I was just trying to come in and give a spark, give some energy and make some plays."

Lou said that it was a physical game all night but he didn't think Gasol's hit across his face was dirty. He said Pau was trying to make a play on the ball and he also said the he didn't feel Bynum was trying to hurt him or throw him to the ground.

He did say this about the level of play, "I felt like a boxer. Every time I was on the bench I had to have (Aaron) Nelson patch me up."

Lou's toughness and his energy was a perfect lift in the third and fourth quarters and was responsible for getting the crowd and team back in the game. It all started with a block within the first minute he was on the floor and the Suns down 13. From there they closed the gap and took the lead in the fourth but just didn't have enough to bring it home. 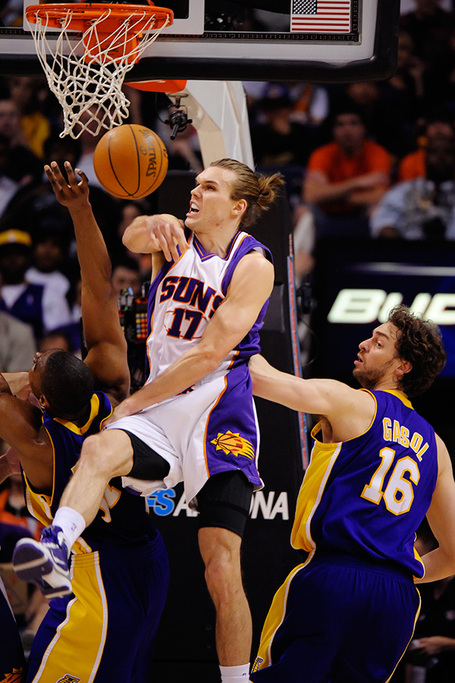 Coach wouldn't address the issue at all. He might talk about it tomorrow when he's reviewed the tape and had time to collect his thoughts. That's clearly the right move.

When he went off about the hard foul on Lou and earned his ejection, he was clearly still steaming about the non-call against Kobe. I will have to check the tape myself, but it sure looked like Kobe dribbled into a sideline trap and then split the double team and dribbled some more. That would be illegal and Gentry was furious by the lack of call.

There were a few other questionable calls as there always are in games but frankly, if you think these games are fixed or somehow unfair than I would just assume you don't watch them. How could you possibly enjoy a game if you believe that the outcome is predetermined. Of course refs make mistakes and of course, there is individual bias against certain players or coaches based on their individual reputations and relationships with the officials. But to think that David Stern is sitting in New York dictating how this game will end? Please. 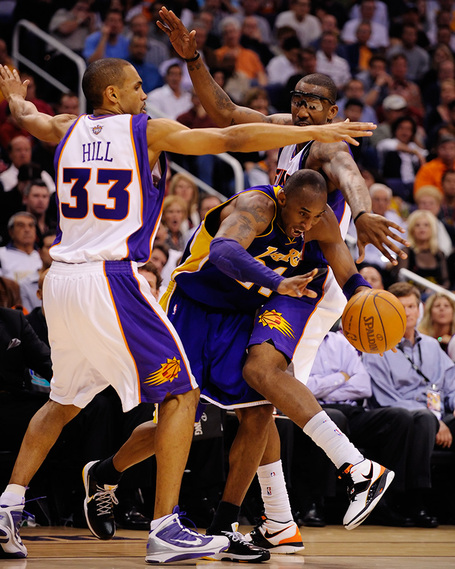