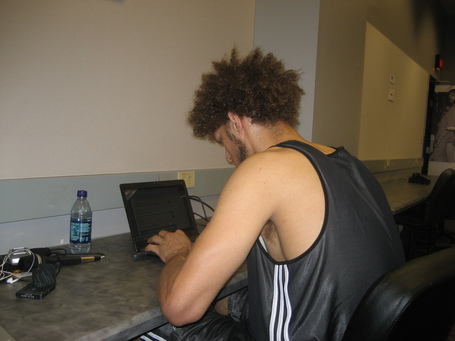 Robin stopped by after Suns practice today for what was originally planned to be 15 or maybe 30 minutes. He stayed nearly two hours answering a range of questions.

On the court, Robin is a self-described "enforcer". In the chat he was was funny and showed his quirky side with answers like this:

Q. Who has more success with girls, you or your brother? Would you like to play again with him in the same team? or does it bother you somehow?

A. Obviously I do that’s a foolish question. He can be a ballhog and idiot sometimes, but it’s always nice to have a decoy like him out on the floor to open up the lane for me. He’s pretty ok at that.

Big thanks to Robin for his time today!

Robin Lopez will be joining us for a Live Chat on Thursday, March 18th after Suns practice. That should be somewhere between 11:30am and 12:30pm AZ Time (which will be PST on the 17th).

As we did with Goran, go ahead and start leaving your questions now. Robin will jump straight into the Live Chat mode when he arrives and then if there's time will circle back to any questions left in advance.

Mark your calendars, bring you lunch to the office, whatever it takes to be here!

Ed Note: Civil and polite questions only. Robin is our guest here and we won't tolerate people hiding behind their screens to lob silly grenades. If you wouldn't ask him the question to his face, don't ask it here. Thanks