That went according to plan...for the most part. The Suns jumped out to a big 16 point lead in the 1st quarter but gave it back to close the half up just 6. Perhaps as a way to make things more interesting for the fans or perhaps just because these things happen, the Hornets went on an 8-0 run to start the 3rd forcing a Gentry time out.

Out of that forced break, the Suns took off and finished the 3rd quarter 28 to 14. The bench closed things out in the fourth allowing Nash to rest for the rest of the game. Final score 120-106.

Unfortunately, this game took a measure of revenge as Grant Hill came down hard on the back of his head with a sickening thud. He lay on the floor for a couple of minutes before walking off. The Suns put out a statement saying he is being evaluated for a concussion. More to come on that.

The rest of the boys looked sharp. Nash was hitting his shots (13pts, 12 ast, 5/7 shooting). JRich had a nice game. Goran and Dudley were solid off the bench and Robin started strong with 7 points in the 1st quarter and 10 for the game.

For the Hornets, Marcus Thorton, Darren Collison and David West were all good but beyond that there's not much to talk about. Thorton was very impressive - hitting three's. Finishing at the rim. Strong game from him. Fun player to watch.

Oh, and Jared Dudley had his 3rd dunk of the season. He owes Goran for that one - Dragic passed up an open three to hit Jared cutting baseline unopposed.

I would like to credit the Suns defense for a solid game but really...oh hell, good game, Suns D. We will just ignore the level of competition faced. 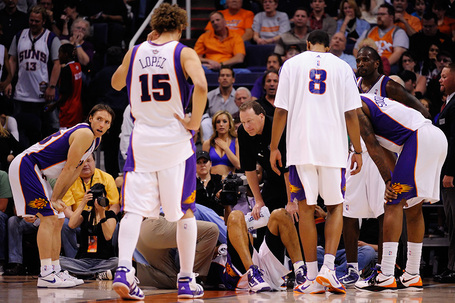 Grant went home and will continue to be evaluated for concussion. When he left the arena his only symptom was a headache. I am not a doctor but I am married to one, so I can report that other concussion symptoms are dizziness and nausea. I would assume they told Tamia (Mrs Hill) to watch for that because those things can develop hours after the actual injury. Needless to say, we will keep you posted on Grant's situation. The Suns practice tomorrow and we will be there.

Coach Gentry was pleased with the team other than the 18 turnovers and getting beat on the offensive glass 14 to 5. He said there's times this team loses focus and tries to do too much and make "Harlem Globetrotter" type plays. He wants the Suns to just keep it simple and execute and not get too fancy.

When David West picked up two quick fouls, Gentry decided to keep going right at him which forced the Hornet to cover Amare with Okafor which was a mismatch that Stoudemire took advantage of. 36 points on 17 shots is a great game by any standard.

Gentry was full of praise for young Marcus Thornton saying he wasn't sure there was an answer for him. He finished with 28 to lead the Hornets off the bench.

Most of the guys cleared out of the locker room really fast tonight. I missed most of Jared Dudley's media time but no worries - he recorded himself being interviewed by FSN AZ so we will post that JMZ interview later. I did hear him say that he thinks he has 4 dunks on the season citing ESPN's stats (which I couldn't find).

Nash reported the following about his back, "I really struggled physically for the last six weeks. Coincidentally tonight I felt the best I've felt in six weeks. Hopefully the work we did last week has really got me to a good point where I can finish the season strong and play at the level I played for the most part this season and help our team win as many games here down the stretch." 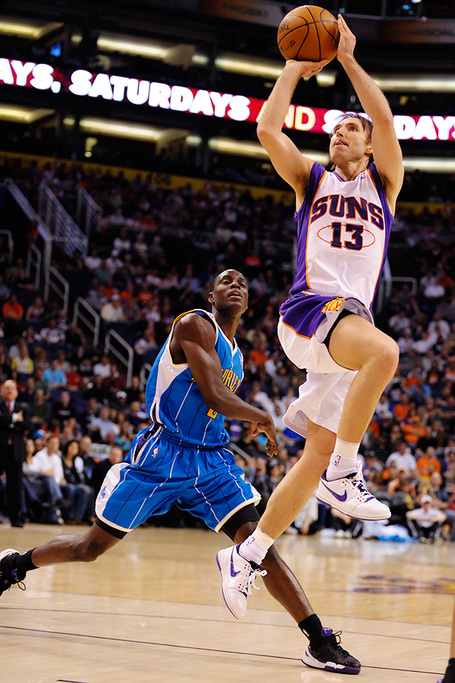 Clark to the D-league

Earl Clark is scheduled to head to Iowa tomorrow for three games with the Iowa Energy. They are scheduled to play the Dakota Wizards on Wednesday and the the Sioux Falls Skyforce on Friday and Saturday. Grant's injury situation could change those plans.

The Suns no longer have a practice scheduled for Wednesday so our Live Chat with Robin will be Thursday the 18th instead of Wednesday the 17th. Stay tuned for more details. 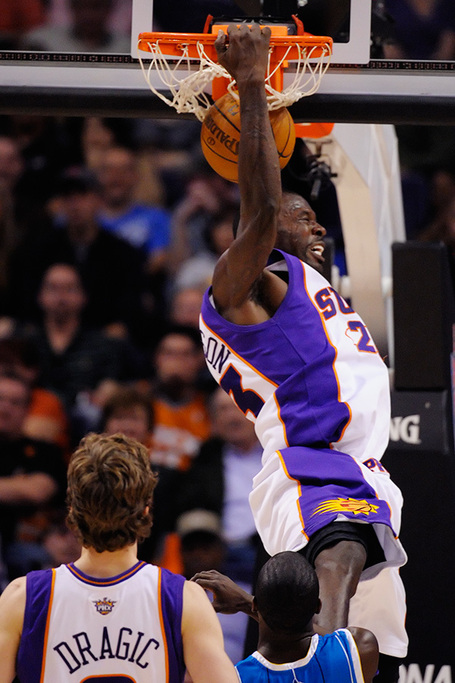