15 games and about 30 days left in the season. That's kind of amazing to consider. It feels like yesterday we were having media day and preseason season game. It's gone fast but the end is near.

Fortunately, this year the Suns season won't be ending on April 15th. Barring a disaster of epic proportions - we are talking 2012 end of the world proportions - the Suns will play at least four post season games.

The standings as of today are: 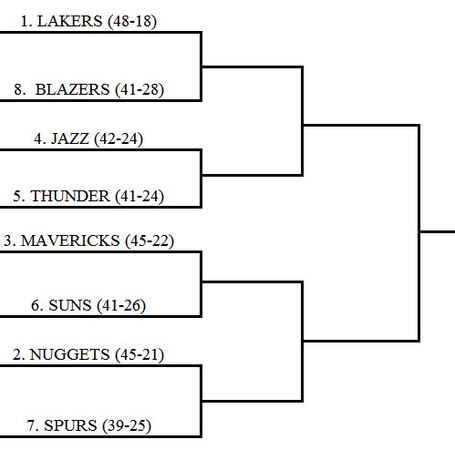 Obviously, the Suns want to win the games they play and try and get the fourth seed and home court advantage but barring that I think the 6th seed is a better option. That way the Suns don't play the Lakers until the Western Conference Finals.

In the first round the most likely opponents are the Mavs, Nuggets, Jazz or Thunder.

The Spurs btw, have 5 more sets of back to backs and check out their opponents on the 2nd night: @ Magic, @ Thunder, @ Nets, @ Suns, and @ Denver. Without Tony Parker and with that schedule they will lucky to hold on to the 8th seed.