"I'm more impressed with the fact that we got it in the environment that we did. We hadn't beaten them yet obviously and coming down the stretch we pulled out a really clutch win in a playoff atmosphere and that's important for us."

Robin Lopez, Quote of the Game

With a ton of questionable calls (going both ways) and a lot of missed shots (going Utah's way), it wasn't exactly pretty, but it still is a BIG WIN for the Suns over the Jazz.

Amare Stoudemire and Robin Lopez absolutely torched the Jazz front line which was already thin without Andrei Kirilenko (calf) and made thinner by the loss of Mehmet Okurat halftime (stomach virus) and Kyrylo Fresenko (Ukrainian Foul Machine) picking up 6 fouls in only 9 minutes of play.

The Suns jumped all over the Jazz early, taking a quick 11-2 lead, with all 11 coming from Amare. The next six Suns points were scored by Robin, setting the tone for the night. Both guys were active and strong in the paint. Robin finished with 4 blocks, 19 points and 10 rebounds and led the Suns with a + 20. At least it was a +20 with a couple minutes to go. He ended up +14...but still.

The Jazz were banged up, tired, and did not play near to their peak level of performance but you have to be impressed, inspired and optimistic about the way the Suns front line controlled this game.

Robin was immense in the paint. So impressive to see what a defensive big can do for this team.

A needed win for the Suns.

I still can't get over how dominant the Suns were in the paint. Robin, in a game where fouls were being called quite freely, only had one going in to the final period. He ended the game with 5 but he clearly knew what he was doing late in the game and was selective about when and how he delivered his blows. Four blocks, 5 offensive rebounds, countless tips and altered shots. A real force. 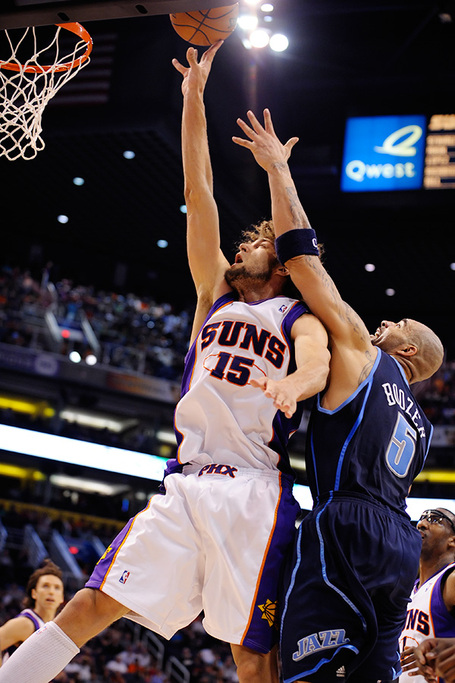 Forget the 19 points (on 7 of 9 shooting). Robin's interior defense and rebounding are the one thing this Suns team has never had during the Nash era. Now we are seeing how a mobile, active, big, center can fit on this fast-paced Nash-lead team. The results are scary good.

Nash talked about how Robin and Amare help each other, "Robin's doing just fine on his own but I think the two of them together help each other because they're both threats. They're both causing different problems for the defense. We surround them with great shooters and play-makers and it's a nice balance."

Robin echoed that, "I think we're kind of able to open it up for one another. They have to block one of us out. Out of the pick and roll they have to guard one of us. We just open the lane up for each other."

With Amare playing at an extremely high-level and Robin coming in to his own, the Suns have a potent one-two punch in the paint. The pairing certainly has the potential to be one of the dominant big men tandems in the league.

Alvin Gentry has this to say about the game, "They were a little banged up and beat up, but that's all a part of being in the league. Injuries are part of it. We'll take a win any way we can get it. I thought we were really efficient on offense and did a great job defensively." 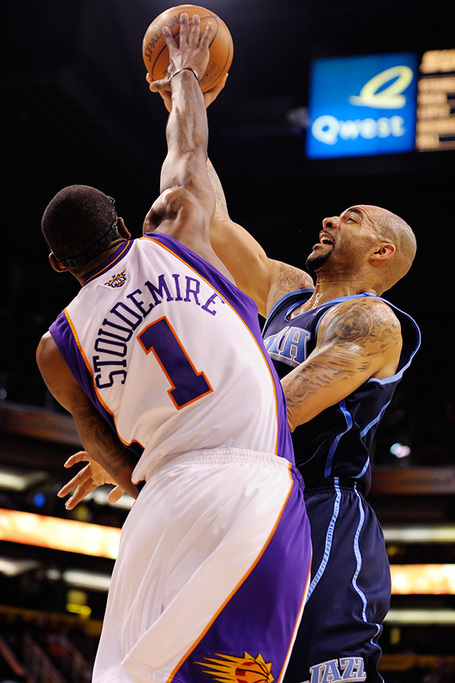