It's no secret that Amare Stoudemire has been killing it lately.  He has been playing like a man possessed on the offensive end, honing in on his defensive skills, and playing with the heart and passion we've been waiting for from him.  Announcers and writers across the country have praised him for his inspired play and defensive improvements.  Suns announcers Scott Williams, Tom Leander and Gary Bender have all said, in one way or another, that Amare Stoudemire has been the best player since the All-Star break.  The best player.  Not the second best player, or one of the best players.  The best.

I took the liberty of doing a small bit of number crunching, taking the stats of five players who have really turned it on over the past month and a half: LeBron James, Kobe Bryant, Dwyane Wade, Kevin Durant and of course, Amare Stoudemire.  Let's take a look and see who has really been the best. 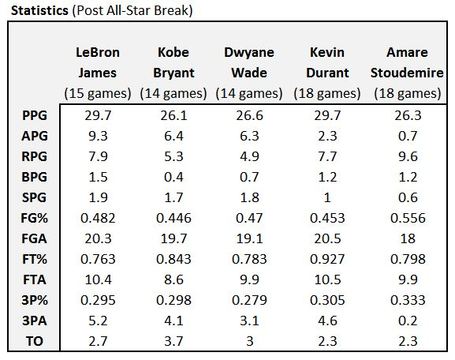 There is no question that LeBron James is the top player in the NBA.  What he's been able to do this season has been remarkable.  He has essentially put the entire Cleveland Cavaliers franchise on his back, and has transformed himself into the do-it-all king of the NBA.  Kobe Bryant has been one of the greatest players in the league in the past decade, and has the championship rings and an MVP trophy to prove it.  He is the clock that makes the Los Angeles Lakers tick.  He is the heart and soul of the team, and has a killer instinct that you can't teach. Dwyane Wade won the scoring title last year and picked up this season right where he left off.  He attacks the basket with reckless abandon.  Kevin Durant is being mentioned in MVP talk for what he's been able to do with the Oklahoma City Thunder.  No one expected them to be this good, this quickly, and that's all because of Durant.

All of these players are amazing in their own aspects.  They are among the elite to play in the NBA, and you could make a case for any of these players.  However, since the All-Star break of the 2009-2010 season, Amare Stoudemire has stood above them all, and here's why...

Taking His Game to Another Level

LeBron, Kobe, Durant, Wade...they all have the supporting stats to validate calling them the best.  But the one thing that strikes me the most is that since the All-Star break, all of these players have been doing what they've been doing all season long.  Their averages are right in line with what they've been putting up for the past 70-71 games.  Amare Stoudemire? Now that's an entirely different story.

At the beginning of the season, coming off of a near career-ending eye surgery, Amare wasn't close to where he wanted to be, as far as conditioning went.  He wasn't as explosive as we had grown accustomed to.  His shot was off.  He was having trouble handling the ball.  Amare assured us all that it was only a matter of time before he was back to the "old Amare".  After gradually getting back into shape, his numbers started to rise.  He became the focal point of the offense again.  All was well, but after most games, everyone who watched the man play wondered, "Is that really all you've got?"

Enter All-Star Weekend.  Amare was named as a starter in the All-Star Game, but most importantly, he remained a Phoenix Sun.  The part that amazed me most is how professional Amare Stoudemire was through all of the trade rumors and speculations that he just wasn't the leader he's professed he wants to be.  Amare just brushed it off, and told us to wait and see.

Since the break, Amare has upped his scoring average by 3.4 points, increased his rebounding rate by over a rebound per game, and has stayed just as efficient as he ever has.  He's continued scoring at the same percentage as he had been all season, but has started taking more shots.  He has been more aggressive, as evidenced by his free throw attempts per game (9.9 compared to 7.6 on the season).  Amare Stoudemire, for lack of a better term, has been an absolute monster.

Playing Best When It Means the Most

When asked about his improved play in nearly every facet of the game, Stoudemire said, "My rotations have gotten better.  My defense on the ball has improved, and I'm communicating out there defensively.  All of that has improved.  It's more being totally aware of what's happening on the court and playing smart.  I've really focused on becoming a complete player, and my teammates have done a great job of helping me."

With the playoffs just under a month away, the Suns have started rolling at the right time.  Winners of 8 of their last 10 games and creeping closer to the Utah Jazz and the number 4 seed, we have seen a new breed of basketball.  The Suns have played with intensity and heart.  Defense has become a widely used term, as the team prepares for the brand of basketball seen during the playoffs.  And, with the Western Conference as tight as it is, teams continue to fight.  There's almost a playoff atmosphere at every game.  There's a sense of urgency, and the Suns know it.  Amare Stoudemire knows it, and he has more than responded to the call to step up.

And it is a beautiful thing.

Seth here to add on to this analysis with some pretty charts.

I broke Amare's season into pre and post but used the game against Dallas on January 28th as the line of demarcation. You might recall that game. It was the one where the Suns broke the TNT Curse and the game where Amare was benched for the entire 4th quarter.

I think we can say that woke him up a bit... 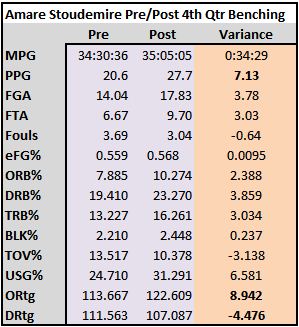 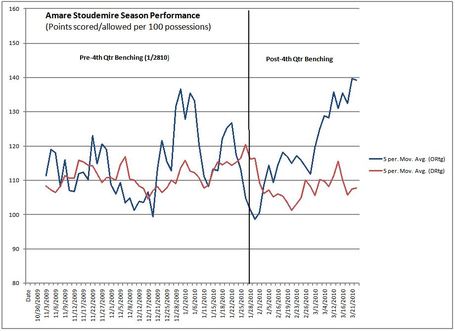