Just How Good Are These Phoenix Suns?

Share All sharing options for: Just How Good Are These Phoenix Suns?

This question has been bouncing around my head for a few weeks now and despite all evidence to the contrary, I've been unable to drop my natural pessimism and jump on the bandwagon.

But here's the funny thing: there's not a single game (other than the Lakers w/o Frye) that I've not felt the Suns would win.

Where's all this Sad Sally stuff coming from?

At 20 and 5 since the BIG SEASON TURN AROUND (aka benching Amare in the 4th quarter of the Jan 28th Mavs game), the Suns have been a team on a mission. Playing with focus and determination. Clicking on all cliched cylinders.

Beating good teams like Oklahoma, Utah, Denver and Portland. Destroying bad teams in decisive fashion like Minnesota, New York and New Orleans. Even pulling out tough road wins in very losable situations like the Warriors and...well that's it, because the Suns have been at home long enough to burn through 10 pages of Honey Do's.

And yet, doubt remains.

So, just sit back and hear me out as I seek to exorcise my demons of doubt though the time tested process of group therapy.

The Best Franchise Never To Win A Ring

Suns fans are not Lakers or Celtics fans. Their obnoxious ways are born from success - a combined 32 out of a possible 63 championships will do that.

Suns fans can't relate. Zero rings in 41 seasons (and only 2 conference banners and a measly 6 division titles) is a pretty hefty record of futility for the recently named fifth-best NBA franchise in all of known recorded history.

And if that's the story of the Suns history, this season is a smaller mirror image. A hot start, followed by a mid-season sub .500 swoon, followed - so far - by a strong finish.

And if that's the story of this season, how many games this year have followed the same pattern? Hot start, double-digit lead, blown lead, sometimes win, sometimes not.

That's just the emotional side of lower expectations. This team, for all its strength, is still not a threat to contend in the West. Or is it?

Just How Contenderitous Are the Suns?

There's not a team in the West that isn't flawed.

but the Suns also are...

There's a lot to be hopeful for. You can easily make the case that the Suns are at least the 3rd best team in the West behind the Lakers and Mavericks and no team is more than one big injury away from having their chances ruined. You just never know what might happen once the post-season starts.

And yet, after 41 years of frustrating Suns history, I still won't believe it until I see it. 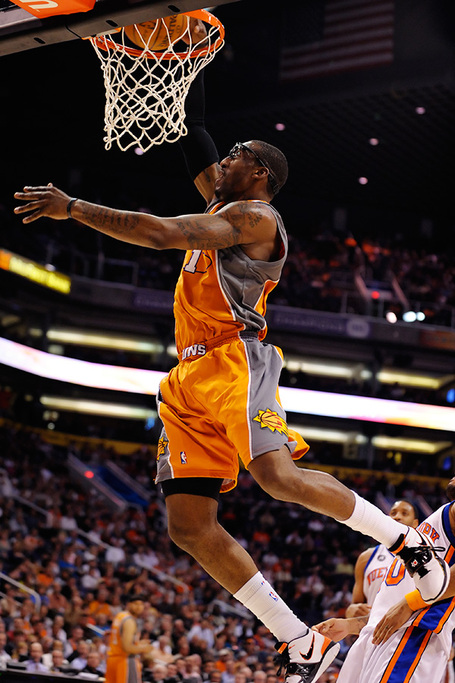