Admit it. You've been laying awake at night wonder what's so different between the Phoenix Suns current winning streak, the mid-season slump, and the early season run.

Now you can finally get some rest. After you read on...

Here's the fancy chart that you've been waiting for to make your life complete. You are welcome.

And yes, if you click it, it will grow bigger.. 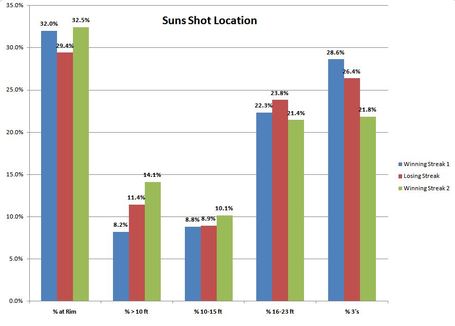 Out of the gate the Suns were shooting red hot from three and they were one of the fastest teams in the league. The defense during that time was decent and the rebounding good enough. It was a streak fueled by offense.

When the outside shooting cooled off (as it had to) the Suns continue to play fast and they tried to regain their offensive mojo but as a result of more missed shots their defense got worse as their offensive rebounding woes worsened and they gave up more second chance points. The Suns were still improving in their half court field goal percentage defense but as the rebounding got worse they simply couldn't keep up and ended up with a losing record.

Now the Suns are shooting fewer three's but are still very good in the half court and lead the league in offensive efficiency. During the current win streak, the defensive efficiency is now around league average and the rebounding is among the best in the league. The only thing keeping the Suns from being a better defensive team is the high turnover rate combined the very poor turnovers forced.

Now, go get some sleep already!

Special Thanks to Tom Haberstroh from the great site, Hoop Data. Not only did Hoop Data provide a lot of the information used (as did Basketball-reference.com and NBA.com) but Tom responded quickly to a question I had AND showed me a REALLY cool trick for getting and using data from the web. Thanks, Tom. I owe a few beers when you come to town! Or girls. Your choice.