Share All sharing options for: Jazz Come Back In the Fourth on Suns: 116-108

Suns came out of the huddle on fire, quickly building an 11-2 lead with 6 of those coming from Robin. He and Amare dominated the boards early.

They got themselves a nice 10 point lead after 1 and then managed to keep it pretty even through the 2nd. The Jazz certainly stepped it up but I guess they forgot that Grant Hill is FREAKIN AWESOME! He had 9 points and 3 rebounds and another great block and a YouTube worthy dunk. Took a couple of charges, too.

Nash was bloody brilliant through the first half, with 14 points and 8 assist in 18 minutes. "We have Steve Nash and you don't." (prize to anyone that knows the origin of that quote).

Overall a darn good half of basketball. Great energy. Great effort. Solid play from both sides. The Suns did have 9 turnovers (4 for Nash, 3 for Hill) and gave up 11 OReb but with the Jazz only shot 40%, there were a lot of missed shots to grab.

Amare played well with 10 points and 3 rebounds in the first half before going nuts in the second. He finished with 30 points on 17 shots but he did miss 5 free throws and only had 7 rebounds.

The Sun managed to keep the lead around ten during the third despite Nash sitting with four fouls half-way through but the Jazz came back in the fourth hitting a number of three's and playing solid D forcing 4 Suns turnovers. They outscored the Suns 41 to 22 in the fourth. That's painful. That's really, really sucky.

The Jazz were able to close it out the same way they got back in the game - by forcing turnovers and hitting threes.

It was a great game for most of the night but the Suns just couldn't keep up the energy at the end. It was a tightly called contest which made for an ugly one but it was a good taste of the playoffs to come. Painful loss. Very painful.

Some numbers to chew on:

I know this is a painful loss for everyone. Players. Fans. Max Simbon who got run over by Kriilenko after Lopez took him out with a flagrant foul. But I agree with Gentry in his post gamer when he said, "It's not so much what we didn't do, it's more so what they did do. They made the necessary shots and came up with good defensive play, and I really though we kind of ran out of gas at the end. That's asking a lot of Grant and Steve."

The Suns gave it their all for about 45 minutes. The game was tied at the 1:50 mark. The Jazz had scored 31 points up to that time which is a lot but not an absurd amount considering they were 7 for 11 from three in the quarter. They dropped 10 more points in the final 80 seconds with two dagger threes by Williams and Okur and a handful of meaningless free throws.

I will have to go back and look at the fourth quarter again, but my sense is that they were just hitting shots. They are a good team and Williams is going to force you to collapse in the paint and then he's going to find the open man. Exactly like Nash. The difference was they hit their shots and the Suns went ice cold going 1 for 9 from downtown in the 4th.

It sucks losing to the team we are chasing but I don't think this game has any greater meaning beyond a tired team getting beat by a well rested Jazz squad that was pissed about losing to the Clippers.

Don't go jumping off any bridges tonight. There's still plenty of games left. And shame on you anyway if you let yourself start believing this Suns team is somehow in the top tier of the Western Conference. Or even in the 2nd tier for that matter. Not yet, anyway and tonight showed that.

Oh, and how awesome is Grant Hill? I almost asked him if he drank Sprite but he didn't seem to be in the right mood for that. He did talk about eating well and getting plenty of sleep as part of his "secret". 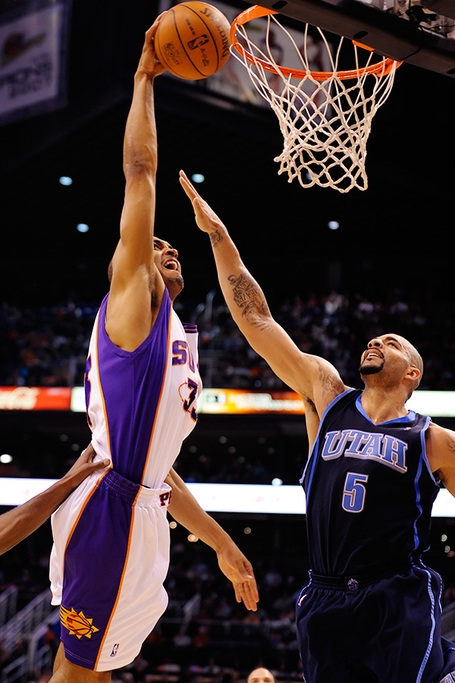