If you are a Suns fan, you know at least one of the two things: no matter how well the Suns play, or how many commentators say that the Suns are on a hot streak right now, we always feel like we're still disrespected.  We also feel like we can take on the biggest opponents and expect to win, but also fear the smaller, much more inferior teams.

I will just go ahead and start things off with this: the Indiana Pacers are not a very good team.  Does that mean that their roster is void of talent?  Absolutely not.  They have one of my favorite younger players in the league in Danny Granger, they have a solid young big in Hibbert, and I am one of many who likes Brandon Rush, but can't tell if he's going to be good or a total bust.  Also, they were good enough to do this to us last year.  And this to us this year.

But, aside from all that, this is a game the Phoenix Suns should win.  I'm not going to call it a "must win", because, honestly, I don't believe there are "must win" games until it's either "lose and you miss the playoffs" or "lose and you are knocked out of the playoffs".  However, that being said, we should win this game.  We almost need to win this game for our own mental health.

In honor of tonight's game against the Pacers, I am bringing out an old picture I found somewhere (I think it was here on the boards).  For all you fans of Lost out there, I call it... 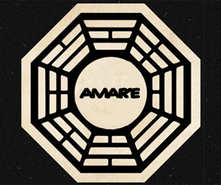 It's no secret that Amare Stoudemire has had some of his best games against the Indiana Pacers.  So, for tonight, I am calling out Amare Stoudemire to bring his "Gorilla Game" and dominate as we know he can.  Troy Murphy can ball...straight up.  There is no denying that fact.  He's a solid rebounding big man whose bread and butter is the top of the key three point shot, which could spell trouble for the Suns if he gets hot.

However, aside from Murphy, Indiana is pretty thin on the front line.  Hibbert has been impressive in moments this season, but he's nothing Robin can't handle.  Amare is basically going up against Troy Murphy and relatively-unknown player Josh McRoberts.  Tyler Hansbrough is possibly dealing with Postconcussive Syndrome and might be out for the rest of this season (and possibly part of next as well).  Best wishes to the kid.  But I digress.

There is no reason that Amare Stoudemire shouldn't have a monster game.  He has been heating up lately, and many people are wondering, "I wonder if he's actually worth the money".  Well, Amare, this is your chance to prove it.  If Amare can dominate this game and not let the Pacers have a shot at winning, well, that's one step closer to that big paycheck you're wanting.

Keys to the Game/Bullet Worthy

These are the games that define a team.  If you can beat the good teams, sure, that's nice, but if you can't take care of business with the lesser teams, that speaks more about your team than the one or two big wins.  The Suns, by all means, should get a win here.  There shouldn't even be any doubt of it.  However, since this is the NBA, and even the guys stuck on a team with a 20-42 record can beat you on any given night, the Suns can't overlook this team.

Go out and win it.  Oh, and Amare, this game is yours for the taking.  So please take it...and then dunk it.  Repeatedly.