All of a sudden a pretty routine game goes from a quiet late night at the library to a pumped up dance party with DJ JRich spinning the discs - thanks to Earl Watson and Channing Frye mixing it up.

Here's the blow by blow as I saw it from the replays:

That got the crowd riled up and Granger who shushed the crowed after hitting the T instantly became the villain getting boo'd every time he touched the ball.

The Suns were up 87-83 at that point and managed to close out the ugly contest.

It didn't seem to be an especially chippy game up to that point although Lou and McRoberts got tangled up in the 1st half and drew the double T's and Dunleavy took an elbow from JRich in the chest (kind near his arm pit) that knocked him out of the game. That one seemed inadvertent from the replay I saw.

The refs were calling a tight game all along with 40 free throws taken by half time and a total of 72 by the time the night was over.

Frye also tweaked his shoulder in the 1st quarter on a routine play. Seems like it popped out but went right back in. It looked pretty bad when he was walking walking off the court hunched over with the arm hanging motion-less at his side. He was back on the bench and then in the game by the middle of the second quarter though. Eventful night for him.

Amare continued to feast on the Pacers finishing with 30 points against the team he's averaged the most points against in his career. Jason and Grant did their part as well (20 and 22), as Nash did just enough to survive the game hitting some big shots in the third when Phoenix was flat. He finished with 12 points and 5 assists.

The Pacers had 24 second chance points at the half and finished with 34. Gentry won't be happy about that but a win is a win.

It wasn't a pretty game with both teams missing a ton of shots and spending a lot of time at the line but the fans at least had some fun thanks to Channing.

The win is the Suns' 40th on the season and 1900th for the franchise overall.

Channing Frye was a bit contrite in the locker room but insisted that he didn't throw a punch in the fracas. Certainly looked it to me watching the replays. He might have even swung twice, once at Granger and once at Hibbert. Hibbert also looks like he took a few jabs at Nash while the ref was restraining him.

"I was just setting a screen to Steve and Earl swatted my hands away the first time and that wasn't a big deal and the second time - I don't think it was the right play," said Frye. "I want to emphasize it's not my style of play to be mushing people and doing stuff like that. But I think at a certain point you've got to protect yourself and you can't just allow a play like that. I know the ref called it, but at that point I kind of took things into my hands which wasn't the right play."

And yes, Channing said "mushing". That's not a typo. Listen for yourself:

Nash joked that he'll probably end up getting suspended as well. You might recall last season he got one game for "escalating" the little tussle with the Rockets.

This time, if anyone's going to get suspended for escalation it would be Danny Granger who said this, "They were playing dirty and throwing cheap shots at one of my teammates. That's the tale of the tape. Watch the tape yourself and you'll see what happened."

As for the crowd reaction he got for "shhing" the fans after hitting the technical free throw he said, "I love it. I absolutely love it when you can get the entire auditorium chanting "you suck," that's pretty nice I think."

Nash is still playing through pain and is uncertain if the five days off will be enough to get him right.

Here's the video. The fight starts at about the 1:30 mark. In this one they imply some kind of carry over from the last time Suns were in Indiana and Earl elbowed Nash in the face. No one here thinks there's a connection but apparently Frye and Earl shoved a bit on an earlier play after a Frye dunk.

More pictures of the altercation from Max Simbon who missed the initial flare up but caught the rest: 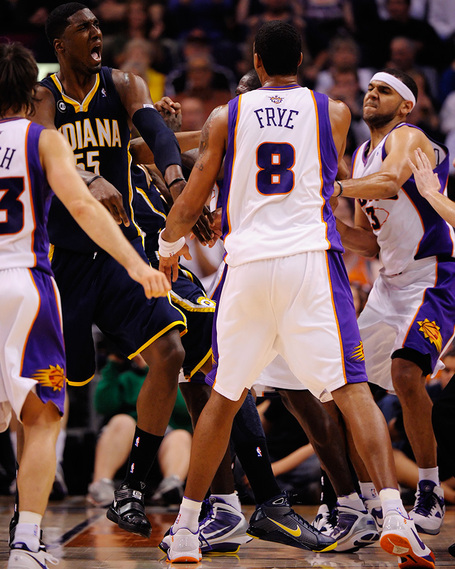 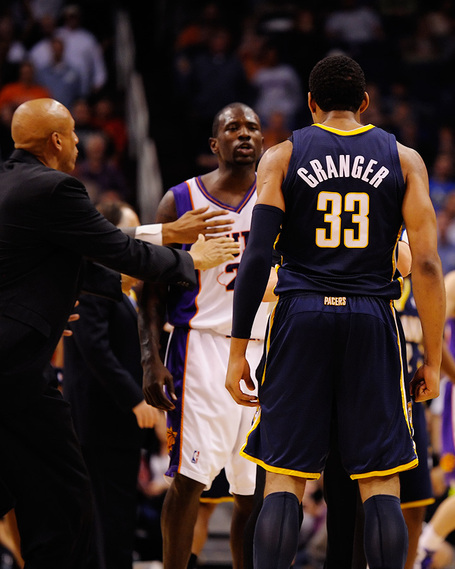 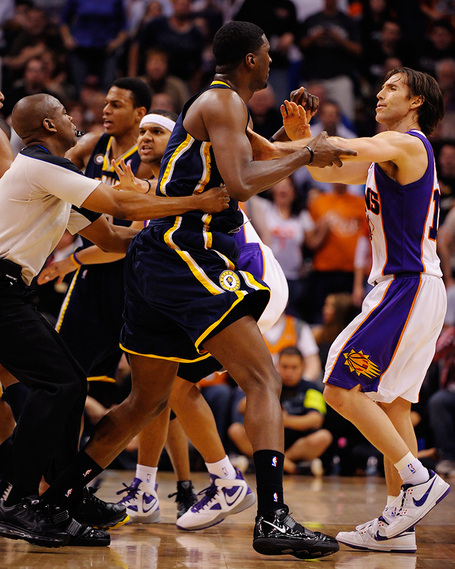 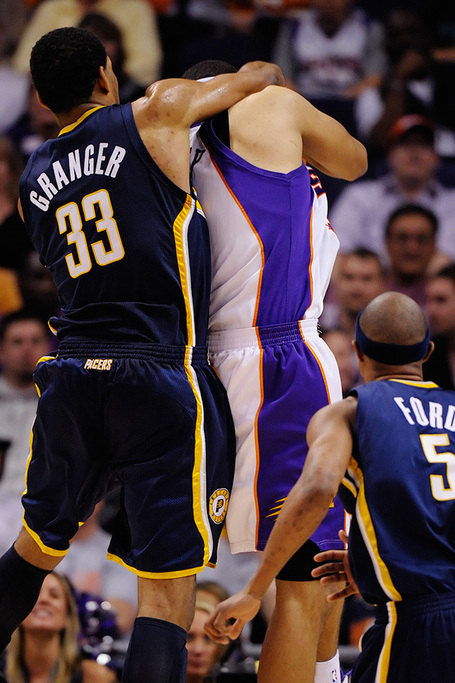 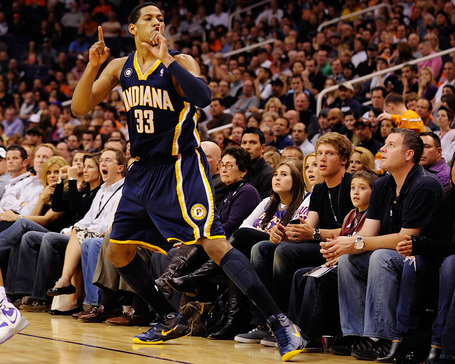