Robin "The Enforcer" Lopez Reacts To Upgrade Of Flagrant Foul

Share All sharing options for: Robin "The Enforcer" Lopez Reacts To Upgrade Of Flagrant Foul

In Wednesday's game, with about 2:17 to go, the Suns were down 104-105 when Utah Jazz forward Andrei Kirilenko intercepted a Robin Lopez pass and streaked down the court for an easy two points.

It would have been an easy two points, anyway, except Robin chased him down and pushed him with two hands in the middle of his back (as you can clearly see in this photo). Kirilenko went flying into the baseline, crashing into our photographer Max Simbron, nearly kicking him in the teeth and breaking a piece of his equipment.

Andrei, who's had recent back issues, stayed down for awhile before returning to the game to hit one of two free throws. Fortunately for the Suns, on the extra Jazz possession resulting from the Flagrant 1 call, Carlos Boozer moved his hip into Jason Richardson on a screen and the Jazz are called for an offensive foul. The foul ended up costing the Suns 1 point but easily could have been a 4 or 5 point swing at a critical junction in the game.

At the time, the official called a Flagrant 1 which gave the ball back to the Jazz after the free throws. Today, we learned that the league upgraded the call to a Flagrant 2. A Flagrant 2 during a game earns an automatic ejection and review for possible suspension. In this case, no suspension was handed down, although frankly I am not sure why that is.

Robin confirmed that he was informed by Steve Kerr that the league upgraded the call and said that he was never contacted directly by the NBA about the play.

After Saturday's game against the Indiana Pacers, which included its own altercation not involving Robin, Lopez had this to say about the play he made Wednesday, "Just basketball. We were down one at that point. Any enforcer would have made it."

I was a bit stunned that Robin was so blunt about it so I asked him to confirm that he called himself "The Enforcer" and he did. I asked him him if he thought that was his role on the team and he said, "Yeah."

Robin said he likes playing physical and "mixing it up" a bit and the Suns certainly need a guy like that. Especially when he's an athletic 7 footer who relishes defending the paint.

You have to give him points for being honest about it anyway, but I hope he realizes there's a difference between delivering a hard foul when someone's driving in the lane versus pushing a guy with two hands in his back while he's completely exposed. That's not a basketball play.

Suns fans have every right to love Robin and what he brings to the team but there's no question if Kirilenko had pushed Grant Hill like that we'd be clamoring for blood. Fair is fair and Robin's play was dirty. Hopefully, it won't become a trend.

Brush with death (or a mouth full of teeth anyway)

As for our own Max Simbron, he survived the close call - the worst he's had in close to six years of shooting basketball from the baseline. In the TV replay you can clearly see Kirilenko's foot brush just inches from Max's face.

"So AK gets a breakaway off a steal I think and starts running up and Robin caught up to him and pushed him in the back. Next thing I know he's flying right at me. I think we had a moment. He kind of looked at me and I thought he was going to knee me right in the mouth. He stopped right in front of me and kind of dove between me and the other guy and I think he snapped a piece off my lens or something but better that than my face."

And what does Max do with AK47 coming right at him? He shoots a picture of course... 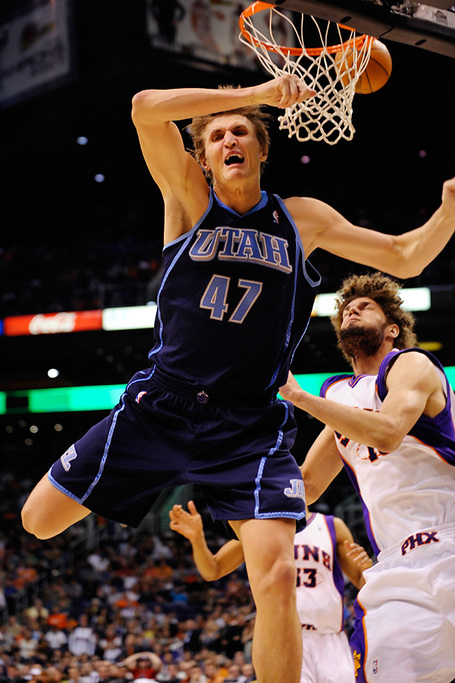 Tell me that Max doesn't deserve a medal for bravery for surviving THAT coming right at him.