Daily Links: Spring Break - Get Your Party On!! (and your Nash healed)

Share All sharing options for: Daily Links: Spring Break - Get Your Party On!! (and your Nash healed)

It is really weird to have five days off in the middle of the season but for the Suns it couldn't have come at a better time. With Nash banged up and missing both backup point guards, it will provide some needed healing time.

I wish Nash sounded more confident that he will return from this hiatus fully recovered and ready to run and gun into the playoffs.

He didn't after Saturday's Pacer game, "I don't know, like I said if I just laid in bed for five days it might not improve because a lot of it is rehabilitory, so we'll see. We've just got to do the best we can and just hope for the best. I'm sure some sort of rest will help but I need to do some work on it."

Of course, Steve has such high standards for himself and his level of play and he was clearly frustrated by his inability to get right. But let's not forget that after just two days rest when he skipped the Oklahoma trip, he came back against the 76ers and shot 8 for 9 (20 points) and had 13 assists and only 2 turnovers in one of his most efficient games of the season.

Goran and Leandro are both expected to be back for the Lakers game on Friday. LB should be practicing with the team today and we'll see how far along Dragic is in his recovery in a few hours.

The coaching staff is also trying to get Grant Hill to rest more this week and sit out of some practices but everyone expects him to show up anyway. That's just how Grant rolls....or flies, as the case may be.

It will be a quiet week with no games, but we'll be here with practice reports and some other stuff to kill the time.

Speaking of injuries, we should find out today if the Nuggets are going to lose Kenyon to knee surgery. That would suck...for them. And Tony Parker broke his hand this weekend and will be out for the rest of the season. That sucks...for them

Suns expecting word on fallout from Pacers scuffle
The Suns expect to be contacted by NBA officials today with either more interviews or a punishment decision for Saturday's third-quarter fracas with the Indiana Pacers.

Beasley steps up, Alston steps out, as Heat steps forward - Sun Sentinel
For those interested in Beasley and/or Rafer Alston who's time in Miami seems to have been a disaster

Mavericks' Marion has dialed back game for NBA's top prize – a championship | Dallas Mavericks News | Sports News | News for Dallas, Texas | Dallas Morning News
"You got to sacrifice certain things to get that ultimate goal, and that's a ring, the hardware," Marion said. "Once you get that hardware, nobody can say anything to you. That's what I want my legacy to be. I want that ring."

Rookie Earl Clark strives to be in Suns' rotation
"I've been playing against those guys (other rookies) all my life, so I know where I stand against them," Clark said. "Some teams are letting their rookies play and losing a lot. I'm on a veteran playoff team with a lot of great players and Hall of Famers. I'm glad to be in this position, not picking up bad habits. I feel like what other players are learning, I've already learned because of the vets I have and the things they're teaching me."

It went unmentioned in the recap due to the fight coverage, but Jared Dudley came up with two big defensive plays late in the game Saturday. Max got pictures of both - a block from behind on Granger and just a filthy steal on Troy Murphy. 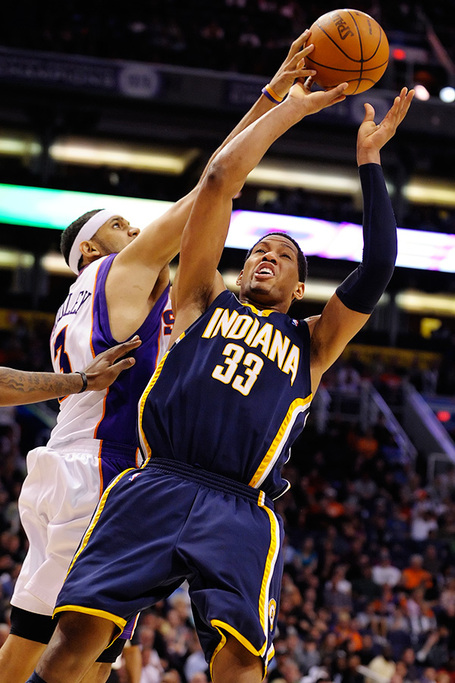 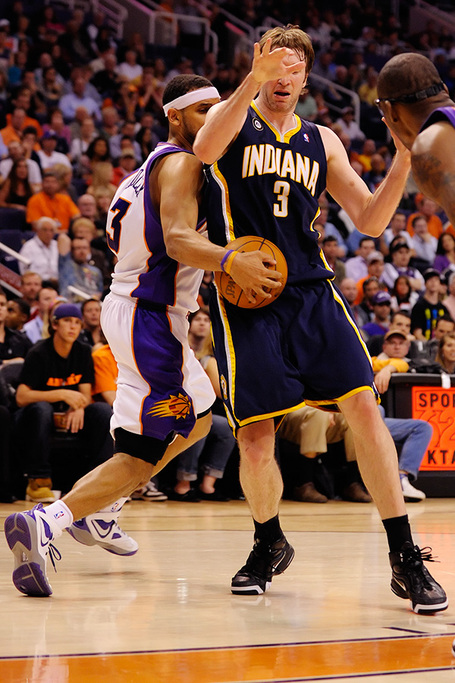