Phoenix Suns: Best Team In The West (NOT APRIL FOOLS)

Share All sharing options for: Phoenix Suns: Best Team In The West (NOT APRIL FOOLS)

The Phoenix Suns are on a 9-game win streak (best in the NBA) and are 18 and 4 since the all-star (also best in the NBA). With a full roster they are now a legitimate contender in the West.

All you pre-season naysayers can put that in your pipe and smoke it.

The team is balanced and focused. They can score in the paint, behind the arc or off the dribble. They have depth, share the ball, have fun and compete hard. They are winning losable games and beating top caliber teams.

With the Lakers continued struggles and a key injury to the Nuggets, there is no reason that Phoenix shouldn't be considered a threat win the Western Conference and take yet another crack at winning a ring for the championship-starved Suns fans.

Numbers aren't everything but they are a lot and when you check these out you will see why this team is so good.

Defensively, the efficiency on the season is a miserable 110.5 but that number has improved from 112.2 in Jan down to a respectable 104.8 in Feb and 106 in Mar. Opponents eFG% at .492 is slightly better than the league average and as good as any Suns team since 2004/05 (.478) when the league overall was shooting about 2 points less.

The result is an 11.9 differential in the March offensive and defensive efficiency numbers which is the best in the league.

Defensive rebounding and turnovers remain the Suns biggest weaknesses but with Robin Lopez in the line-up at least one of those problems can been negated as we've detailed here.

Most importantly, the Suns are playing their best basketball going into the playoffs. 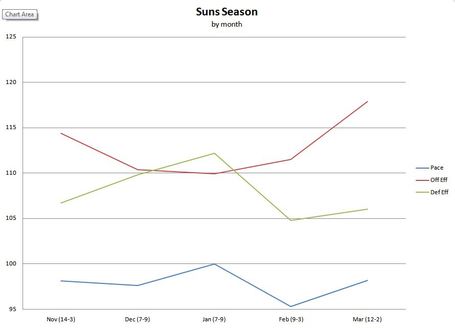 This chart tells an interesting story. During the hot start the team played at a fairly fast, but not torrid pace and relied on their 45% three-point shooting to score. When that dropped off and the team slumped the defense suffered as well. The response was to try and play faster but that only made the defense worse and the offense didn't improve either.

So Gentry put the brakes on and refocused the team on defense and rebounding. He inserted Robin Lopez into the starting line up and went to more deliberate half-court sets. That resulted in a 9-3 February which got the team's confidence back and allowed the tempo to pick up a bit which hurt the defense a tad but created an offensive explosion during the 12-3 March while still playing passable D.

Of course, that's all just some bunk I made up. Feel free to look at those numbers and make up your own bunk as well. We can have a bunk-fest.

The bottom-line is the Suns right now are playing as well as anyone in the West.

Check this out for proof (click it to see it):

The Suns by far lead the West in efficiency differential (+11.89) and field goal percentage offense and defense (+8.05). They continued to struggle with turnovers and defensive rebounding although the March rebounding differential numbers were skewed by about 2 points by one horrible rebounding night in Minnesota (-21.4 without Robin Lopez). The Suns were also near the top of the pack in free throw rate differential thanks no doubt to Amare's aggressive play.

If the Suns are able to take better care of the ball and prevent opponents from getting too many second chance points they can beat anyone. And if monkeys could fly we wouldn't need carrier pigeons.

The Mavericks numbers were interesting for how poor they were despite an 11-4 record. They were worst in the West in efficiency differential, worst in defensive efficiency and virtually tied for worst in opponents eFG%. The Mavericks, despite the trade for Haywood, were a horrible rebounding team with a -6.46 offensive rebounding rate differential and they also trailed way behind in free throw rate. What the Mavs do very well is take care of the ball (2nd in the West).

These poor stats prompted me to look at their schedule where is became clear how they still managed such a good record despite those poor numbers. 9 of the Mavs 11 wins came against lottery teams with the only "good" wins coming against the the Bobcats on the road in early March and a win against the struggling Nuggets late. Losses include the Celtics, Knicks, Hornets and Trail Blazers.

I was pleasantly surprised by the Mavs under-the-hood weaknesses.

At 9 and 6 the Lakers had the 2nd worst March of all the Western powers and so not surprisingly they were middle of the road in about every statistical category.

The Lake Show is looking murky right now and I am more and more buying into the idea that the best time to play them might be the first round when Bynum isn't fully recovered and they haven't yet gotten into playoff mode.

Of course, they are still the class of the West and are very likely to simply "turn it on" when the post season starts.

The Spurs are back to playing Spurs basketball. They have the worst offensive and best defensive efficiency numbers and they continue to be solid in all other areas.

The Blazers numbers are also very interesting. They are the only team in the West with a negative eFG% differential and are the worst team in both opponent and their own shooting efficiency. So how do they have the 2nd best record for the months and the 3rd best scoring efficiency differential?

The answer is fundamentals. As the slowest team in the West (by far) the Blazers have learned to focus on the basics. They are the best in both turn over, rebounding and free throw rates. So while they might not shoot the ball well or even create tough shots, they get generate more possessions and they don't foul.

The Jazz use their ball movement offense to create good looks and they are the a very good defensive rebounding team. Otherwise, they are middle of the pack everywhere else.

The Thunder are the second best rebounding team in the West and take care of the ball. Beyond that they perform well in every other area with no glaring strengths or weaknesses.

Denver (9-7) had the worst record for the month of March in large part to being towards the bottom of the pack in defensive numbers, rebounding and foul rate.

Did you know that the Suns are 24 and 4 when Jason scores 20 points? You would if you watch any Suns broadcasts because it is a number that gets repeated so often it's become a bit of a joke.

But here's another look at the same point.

You can see that while he's shooting more in March (his best month of the year) the difference is minor. What these numbers really tell us is that Jason was in an extended shooting slump for the months of December and January which very well could be explained by the injury he suffered to his shooting hand in Denver back on December 12th.

But could it really be this simple: Good shooting Jason = Suns win? Maybe. When he's knocking down shots and attacking the rim effectively, teams are hard pressed to focus too much attention on Amare and Steve. He gives the Suns a true three-headed monster on offense with a lot of very good little helper demons running around as well.