Get it? Daily Links? As if we are actually doing these every day...it's a joke, roll with it.

Before you do anything else, be sure to click and read these next two articles from the studs at SBNation.com. Trust me, I've meet Andrew and Mike in person. They are studs.

SB Nation's 2010 NBA Awards: As Chosen By The Bloggers Who Know Them Best - SB Nation
It's that time of year again... Or, for the first time ever, on SBNation.com. AWARDS SEASON! Thanks to some awesome participation from SB Nation's writers, what follows is a breakdown of the NBA's biggest awards, as voted on by our basketball network.

Speaking of begging, did you know that for every shirt you buy this site gets ten times more awesomer? True story.

Plus, if I ever see you wearing one of these at a Suns game you will get a cool prize!*

So go get your Bully Ball (or other) Shirt now! 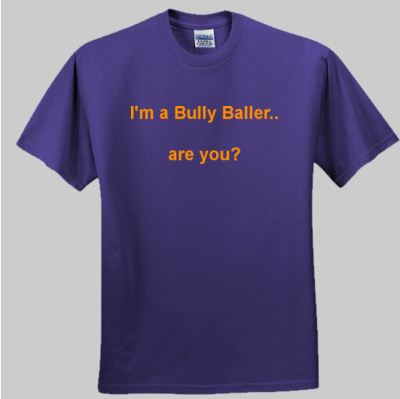 If you haven't yet, be sure to check out Blazers Edge. Their team might SUCK (not really), but the blog is pretty cool...

The Portland-Phoenix Matchup Part 1: A Look at the Numbers - Blazersedge
Final Analysis: Let Phoenix have their heads and you're dead. Their defense is no great shakes but it's not as bad as their offense is good. This isn't just a matchup of talent, it's a matchup of will. Phoenix has a natural advantage there, having been deep in the playoffs before. But Portland's had a few surprises up their sleeves lately, largely due to the heady play of the veterans they acquired this season. While both teams have a chance to win at either end of the spectrum, there are enough stylistic differences between these teams that you'll be able to tell who has the upper hand in this series simply by what kind of game is being played.

Poll: Predict The Blazers/Suns Series - Blazersedge
Vote and get on the record in the comments.