Problem: Too Much Love Between Suns and Blazers Fans

Share All sharing options for: Problem: Too Much Love Between Suns and Blazers Fans

Folks, we have a problem. A serious problem.

Last night the Suns kicked the Jazz in the teeth and secured the 3rd seed while at the same time the Spurs rolled over to the Mavs and the Blazers lost to three dudes and a rookie. Those exciting events set up our current first round match-up between the Suns and Blazers.

All well and good (especially the Spurs throwing in the towel so they could avoid the Suns) until a funny thing happened - a freaking love fest between Phoenix and Portland fans broke out.

Instead of reading some good ole smack talk in the comments here or at Blazers Edge, we are treated to all this sappy shit about how, "we respect your team and fans" and "if we have to lose to someone, we hope it is you that beats us like a cheap whore who skips out on her business".

Ed Note: In no way should the preceding be construed as our support for beating whores or anyone else for that matter. Stop the Violence!

But come on, people. What is this!

THIS IS THE PLAYOFFS!

We can shake hands and kiss each other on the ass AFTER the series is over. I don't care how much "respect" we have for the "fans" of the "Blazers", it is time to follow the words of my favorite bully cowboy and BRING 'EM ON!

Do you think that Jared Dudley is thinking about what a beautiful city Portland is after he shot this dagger into the Blazers' heart? 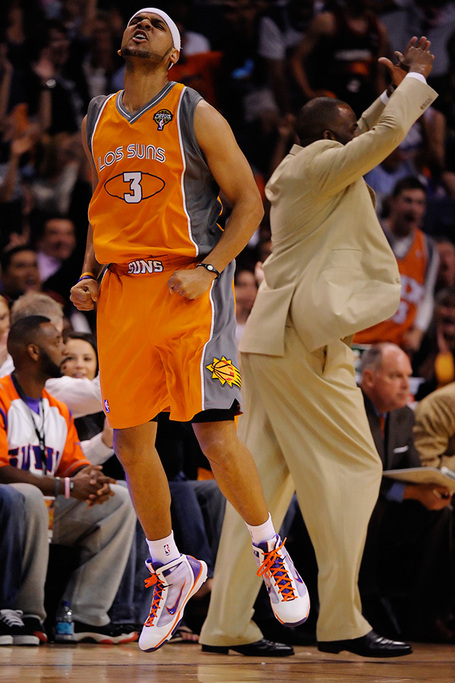 Do you think Amare was thinking about swapping spit with Dante Cunningham when he dunked on his face? 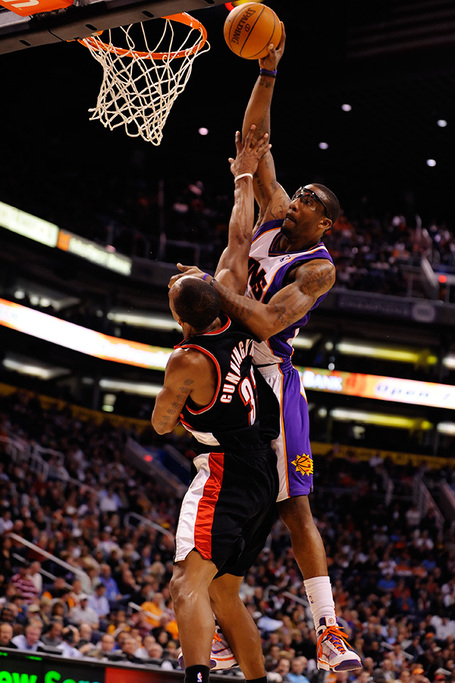 Do you think Steve Nash would go to dinner with his playoff foe the night before a game?

So in the name of all that is holy in sports, can we please suspend the mutual fan admiration society for the next two weeks? Once the Blazers have been properly dispatched to their pretty "Rose City" we can return to loving on each other.

Mount up, people. It Is On!

Ok, I'll go first while you pansies wrap your heads around the idea of not being friends with your enemies...

Hey Blazers Fans, nice chart about with all your injuries this season but you should try going to war with two starters older than the three point line and missing this guy too!

Injuries didn't keep the 4 Warriors who could still walk from beating you last night..

Having just lit the torch, may I kindly remind you to keep your smack civil and follow all the rules of good behavior or you will be banned without remorse.