Three Things You Should Know About The Phoenix Suns

Share All sharing options for: Three Things You Should Know About The Phoenix Suns

We were asked to participate in a playoff round up being assembled by Hoops Addict. The question being asked is this: What three things should people know about the Phoenix Suns going into the playoffs.

Suns fans, you already know these things. This is for all those people checking in on our team for the first time.

As the great man said, Yippie-kai-yay

Thing you should know #1. These are not your weak-ass Suns anymore

Over the past few years the Suns have been considered a weak team both physically and mentally. Suns fans at the time denied this (of course) but alas, it was so. The Phoenix Suns lacked scrappy bench players, lacked physical forwards, lacked a tough-minded coach and, as a result, suffered in the playoffs.

And while this current team is no Rocky Balboa, they have made remarkable strides in all those areas and the man that deserves the credit for that is iron spine himself, Steve Kerr. After seeing how the Suns got beat by the Spurs in the 1st round in 2008 he knew changes needed to be made. D'Antoni was given the chance to get on board but instead left a successful team to stubbornly pursue his vision of basketball nirvana....with Chris Duhon.

Some false starts aside, this Suns team has now assembled the roster and found the right coach to walk a magical line between a Nash-led up-tempo offensive team and a good enough defensive squad. They believe they can get stops when needed, they trust each other enough to be more aggressive on the perimeter, and mentally they can overcome adversity.

We'll know in a few weeks if they're right.

Thing you should know #2. Nash and Amare are still awesome but they've got more help than ever before

The Suns best bench player from 2004 to 2009 was Leandro Barbosa. He's now the worst. He's fallen so far that he is hands down the one and only guy that Suns fans cringe at when he checks in. Part of that is injuries but part of it is that his offensive game just isn't a good fit in Phoenix anymore.

The rest of the guys -- Dragic, Dudley, Frye and even Collins and Clark -- give the Suns a second unit that not only can hold a lead but often can extend it.

In their final game of the season, on the road against Utah who was fighting for home court, the Suns were up 3 points early in the second quarter when the unit of Dragic, Barbosa, Dudley, Frye and Amundson went on a 15-1 run to break the game open. Half that run came against the Utah starters.

Most impressive was that run was sparked on the defensive end and included 3 blocks, 3 steals and 5 rebounds, all in a 5 minute stretch of play. While an exceptional performance, it was not a fluke either. Dragic and Dudley especially have ably backed up the Suns' two oldest players and for a national audience that's not familiar with the Suns, they are in for a treat this post season.

The Suns depth has allowed Nash to average only 32 minutes per game, the lowest since 1999/00 and the Suns leading minutes guy is Amare Stoudemire at 34 per game which is 48th in league.

The Suns bench might not get the attention of Orlando or the big scorers like Terry, Crawford or Ginobili, but they've been a big part of the team's success and they will be responsible for several wins in the post season.

Thing you should know #3. Chemistry is very, very good

this section written by Wil Cantrell

Since the outset of this season, we have heard from coaches and players alike how tight the Suns players are with one another. The locker room is loose and the players hang out with one another off the court. Amare Stoudemire took the whole team out to dinner on a recent roadtrip -- and paid for the whole meal. During the annual trade Amare deadline, when the static of voices and rumors surfaced, Amare endured the noise, and didn't let it all adversely affect his play or attitude. This is evidenced in his heightened level of play leading up to and after the All-Star break. Not only has Amare increased his defensive output, he's also become a beast on the offensive end, in becoming the 4th leading scorer in the league post All-Star break.

Credit the Suns' veteran leadership for the excellent team chemistry. Steve Nash averages something like 239 high fives a game (an intern actually counted during one game), while adding a calm, philosophical approach to the game. Grant Hill is the consummate professional charged with showing youngsters including rookie Earl Clark the ropes of the NBA, and Amare Stoudemire has accepted a more vocal leadership role on this team. Add in Jared Dudley's incessant comedic chatter and the Phoenix Suns have become a team who thrives off of their love of winning, which is a product of their brotherly love of one another. 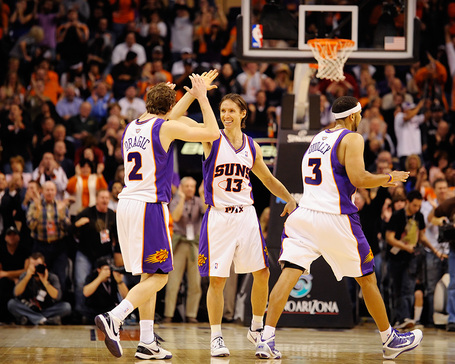