Ever wonder what would happen if you take away a team's clutch fourth quarter tight game go-to guy? I think we are about to find out starting Sunday.

Fortunately, the Blazers have a good answer in mind. A plan. A clear line of succession.

Asked who would be da fourth quarter clutch man, Andre Miller was all over it, "On our team? Probably LaMarcus. Me or LaMarcus you know trying to draw a double team and kick it around. We got Jerryd Bayless that can make plays to the basket. Rudy Fernandez takes big shots so it just depends on how the game is going."

Glad we could clear that up.

Rudy Fernandez certainly thinks he's up to the task. He might only be in his second year in the NBA but he's no youngster. Fernandez feels like his international and Olympic experience will help him step up in Roy's absence, "I don't think so I have pressure to play in playoffs. I play lot of years professional player in Spain and international competition. I think it is big opportunity for me to play in playoffs."

Cute stuff all around. And no, I am not bagging on Rudy for his English. I am just making the linguistic comparison between a non-native speaker and a young child using similar syntax.

And speaking of making big plays to the basket and non-native English speakers, let's interrupt this playoff talk to hear from Goran Dragic who had one of the prettiest drives and finish of the season in Utah on Wednesday.

Goran, take it away, "That's European steps. ha ha." He really did chuckle there. Funny guy. "I make two steps. First step was a little bit left then the second step was right. Like D Wade do that all the time. I had open pass to LB but I didn't catch the ball good so...I just shoot the ball up."

The defense and speed of the Suns second unit are going to be a problem for the Blazers as well. Coach McMillian acknowledged this today saying that the Suns bench plays the same way the starters do but they create more turnovers and his team is going to have to step up their effort to match that.

The two main topics of conversation from assembled media horde were about tempo and chemistry (and it really was a horde given that on a normal Saturday practice there might be three of us there while today EVERYONE including Craig Sager in Khaki's and a polo and John Hollinger in a T-shirt, shorts and sandals where present. I, by the way, was wearing shorts and a short sleeve button shirt and my lucky shoes. Seriously people, where else are you going to get that kind of behind the scenes reporting?)

Back to chemistry because I am done talking about tempo. And really I am kind of done talking about chemistry as well except I was curious what new-comer Dwayne Jones had to say now that he's been here two weeks. And let's not forget he spent two years in Cleveland with LeBron and his shenanigans.

Dwayne was suitably impressed by the Suns locker room and appreciated how he was welcomed in by everyone. He said that the big thing is the lack of cliques. Everyone gets along with everyone without having internal rivalries that can sometimes pop up.

Jones wouldn't go so far as saying this is the best chemistry he's every seen given his time in Cleveland but he did make this comparison to a LeBron-lead team versus the Suns with Grant and Steve, "They're older guys. LeBron's a young guy so he has that young energy. Not to say that Grant and Steve are dinosaurs but they definitely have that been through a lot of wars very seasoned leaderships. Different personalities. More laid back."

That was a pretty nice recovery from Jones who almost went on the record calling his new team mates, dinosaurs. But I think we know what he means.

Amare knows more than we think

Amare spoke on his development as a player and touched on a couple of things that probably don't get enough attention.

"It's like a quick second decision once you catch the ball. If there's a guy in front of you, you may be able to beat him but if there's two or three guys then you should find the open man. It's really a split decision once you figure it out. It's tough to explain because it happens so quick but it's my vision. If I see any guys open I get it right to them."

"My first few years I got a lot of offensive fouls. Pick and roll I would just catch the ball and try and just go straight to the basket. I've gotten a lot better of avoiding that first guy and being able to pass. As my career goes I tend to improve every year."

Passing out of the post and avoiding the offensive fouls. Those are certainly areas that Amare's improved this season.

Amare on this special team

"We think we can make a run here. We think we got something special guys. We got guys playing well enough to make some noise so with that being said you still have to take one game at a time, one series at a time."

Amare says he's spent 15 or 20k on team dinners this year. Don't worry though, he's got it budgeted. He also bought the training staff iPads as part of his, taking care of those who take care of you approach.

For Amare, the most important thing with attacking Marcus Camby is to get him away from the basket and get him on the move. Around the basket he's an incredible shot-blocker who seems to now where the ball is going and uses his length well.

I asked Amare if that meant he would look to isolate Camby more on the elbow instead of the low block. Nope, "You can attack low post. You can attack. You just have to go over the top of him. You can't go try and finger role or lay the ball in. You got to go and play Bully Ball. You got to really go and try and dunk it. You got to be aggressive."

So, next time you are matched up with Marcus Camby or a similar player you have your game plan. Go over the top. Bully Ball him. Dunk it. The phrase "easier said than done" feels inadequate for this situation but for Amare, anything is possible around the rim.

One of the smartest guys on the team when it comes to understanding and articulating the game of basketball, so I had to check in with JD on the series.

Rapid fire keys to the series from Dudley:

Jared expects to get a little bit of time on Andre Miller, possibly in the second or fourth quarter. He says the Blazers wings space the floor like the Suns and are fairly interchangeable between Batum, Webster and Fernandez when it comes to defending them. He said the Suns are still loose and having fun and it is important for the team not to get tight.

Grant Hill is very happy to be healthy and playing well. He's missed only one game in the last two seasons and that was with a bruised heal that he wanted to play through but Aaron Nelson held him out because it has the same foot that he'd had ankle surgery on and they had actually taken some bone from that heal. Seems like a fair enough excuse to me.

Grant talked about his decision not to go to Boston this summer, "Obviously, I don't think any of us thought we would be this good but I think there was a feeling like we were better than what we were and what we showed last year. I kind of wanted to prove it that we were."

Grant thinks he might play a bit on Andre Miller and use his length and size on him. The key defensively, according to to Grant is Miller and Aldridge but also containing the other guys and keeping them to around their average and not have Bayless or Webster or some other guy go off.

Grant also said that the Suns would probably go to the zone at times but as always, you can't use it too much. To keep Miller out of the paint the Suns worked on forming a walling in transition and trapping and rotations. Hill said the Suns will use a bunch of different looks on Miller but overall it is going to take a collective effort from the Suns defense.

Collective defensive effort from the Suns. I think we can hear that now and not smirk. That's a welcome change. 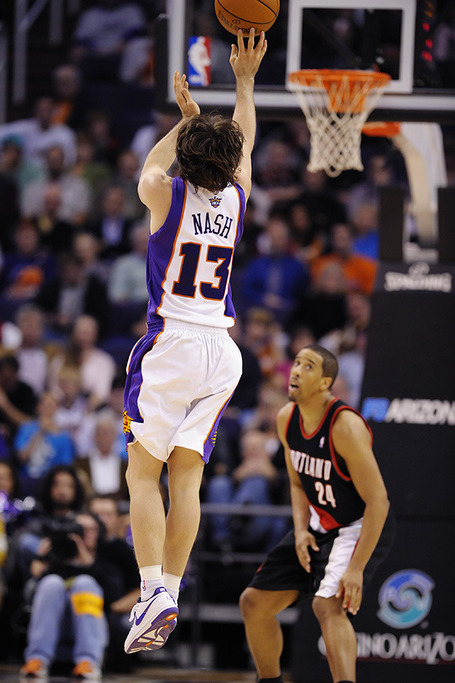