Share All sharing options for: Phoenix Suns Practice Report: Knock Down Them Shots!

Somebody asked me today how confident I was about the Suns getting the Game 2 win. The answer is, I'm not sure.

After the way the Suns beat the Spurs, Rockets, Jazz and Nuggets to close out the season I would not be surprised if the Suns win by 20. But the way this team played last night I was reminded too much of the December - January period of sub-.500 ball.

One thing's for sure. The Suns took a shot to the chin and we will find out soon enough if this team has a glass jaw or is resilient enough to get up off the canvas and punch back. Every playoff team is going to be tested at some point, for the Suns that test came right after the first bell. Might as well find out now what this team is really made off because as we all know, the playoffs are totally different from the regular season.

The general consensus from both teams is that the Suns didn't hit shots that they normally make. The Trail Blazers fully expect the Suns to come out and play better and the Suns couldn't agree more.

Don't expect too many drastic changes from either side but here's a few that I would contemplate:

Kevin Pelton talked about not starting Jarron Collins but I am fine with him starting. Where I wonder if an adjustment couldn't be made is with Lou Amundson closing.

ESPN's Henry Abbott made a great point on the NBA Today podcast that when Lou came out of the game in place of Frye the game was tied at 83 with 6:27 to go. The Blazers would outscore the Suns 16 to 9 in the next 5 minutes to take a 7 point lead into the final 90 seconds of play.

During that time Bayless and Miller scored 9 points and Aldridge flew in for a big tip-in off a miss. With Lou in the game, the Suns probably do a better job containing those guards. Of course, Frye is the game to spread the floor and hit shots but he only scored two points in the fourth quarter and those were on free throws. Overall, Lou played 18 minutes and had 4 points and 4 rebounds while Frye played 30 minutes and had 12 points and 7 rebounds. It's a tough call for sure.

The other adjustment we might see, just speculating here, is Nash staying on Miller. Gentry talked about needing to contain Batum, Webster and Rudy and not let those guys score much. Also, Jason might have been taken out of his offensive rhythm by trying to guard Andre and Miller still was able to score so why not put Nash on him and trust your help defense since you are going to need that anyway. In fact, both Hill and Richardson are better, longer and more athletic help defenders than Nash.

After the jump are my paraphrased notes from all the player interviews. These are not direct quotes but they are close. You can listen to the audio from each player to get their exact words. 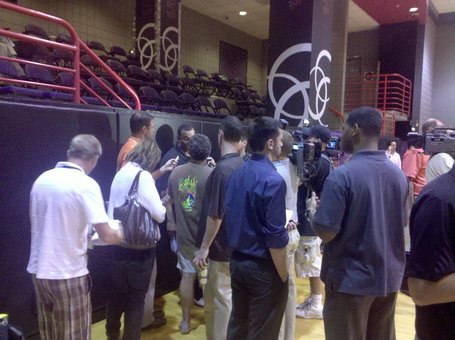 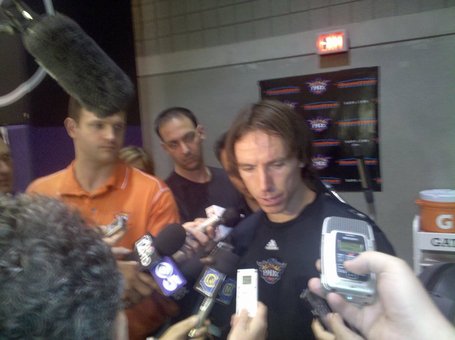 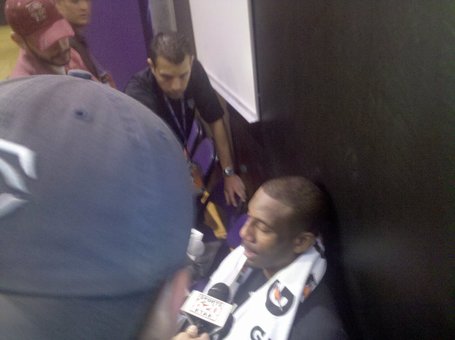 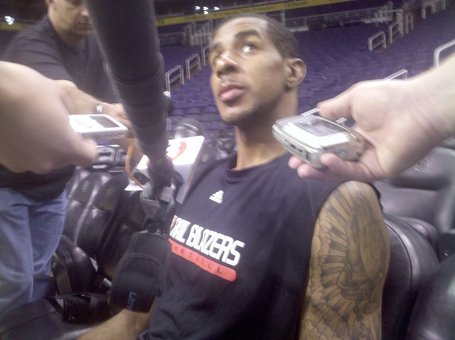 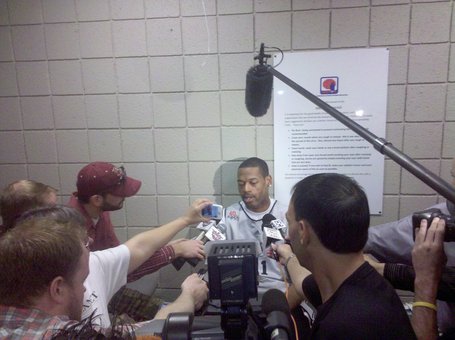 There's more video from today's practice posted on our Facebook page. Go find it by searching for Bright Side of the Sun in the Facebook and then Fan us.