Suns vs Blazers Game 2 Preview: Rise of the Machines (aka Amare's Crucible)

Share All sharing options for: Suns vs Blazers Game 2 Preview: Rise of the Machines (aka Amare's Crucible)

When your race of super machine warriors, programmed to destroy with a combination of supreme accuracy and deadly speed gets defeated by the evil Austrian Terminator cyborg there is only one thing left to do....

Rise From the Ashes and Destroy!

You know, I really should leave the pop references to others who better understand how to properly integrate the plot lines of bad movies and songs into the current sporting situation. I think we can agree that it is just not my cup of tea.

Clearly, what we have here is a case of a team that got knocked down and needs to get up again, because they can never be kept down. That is your Phoenix Suns, baby! Yippie!!!!

Better? How about this one...

You had that Eye of the Tiger, man. The edge. And now you got to get it back and the way to get it back is to go back to the beginning, you know what I mean?

The worst thing that could happen to the Suns, and it can happen to any team, is they got civilized. The truth is they started out in the same Conference and it drove the Blazers nuts. But you wake up after a few years thinking you're a winner, but really you're a loser. But we don't believe it. There is no tomorrow!  Eye of the Tiger!!!

Are you suitably motivated and pumped up? You better be, because I am plum out of cheap theatrical and musical motivational devices to inspire the proper sense of passion, confidence and desperation appropriate for tonight's Game 2.

Ok, just one more....my favorite yet

"There is no future, there is no past. Thank God this moment is not the last. There's only us, there's only this, forget regret or life is yours to miss. No other road, no other way, no day but today."

We will know soon enough just how good the Phoenix Suns really are. I wish to hell that this season provided a clear and convincing picture of a team filled with resilience that we absolutely knew would react to the adversity and find a way to muster the bio-rhythms needed to rise up and get the MUST WIN tonight.

Unfortunately, we've not seen it. We've seen flashes of a great team that's sauntered up to the plate, called their shot and blasted a 400 footer to right field and we've also seen this team lose its confidence and decisiveness and wither away in misery.

I always thought the Blazers were going to be a tough match-up for the Suns but there is a reason all the pundits picked Phoenix to win this series. Even the honest Blazers fans and observers will tell you, this is the Suns' series to lose.

Tonight, the home team needs to show why it deserves those picks.

It needs to show how a dominant offensive can beat a suffocating defense. It needs to impose its will, play with precision and get out of its own way and run the floor with fun and passion.

Mostly though, the Suns needs a healthy dose of Bully Ball 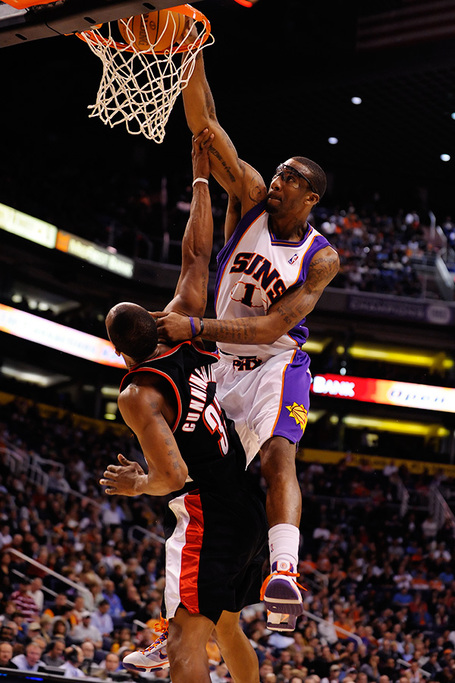 This game and this series rests of the shoulders of Amare Stoudemire.

Sure, he is facing tough match-ups but he showed his bravado in front of the microphones yesterday when he brushed off the notion that Marcus Camby can stop him. Now his body needs to cash those checks that his mouth is writing.

Over the past two plus months of the season Amare played at an MVP level and rightly felt he deserved the recognition that came his way. Last night, we saw the current MVP take over the game when his team was struggling.

Tonight, Amare needs to do the same and show us what kind of player he really is.

This game is Amare Stoudemire's crucible.

The Blazers will surely continue to load up the paint to stop him but he's seen that before. When Amare is in his Gorilla Game, Bully Ball, Eat Small Children for Breakfast mood there's nothing that can stop him.

He will hit open J's and force the defense to extend. He will gobble up loose balls and jam them home before Camby and Aldridge can react. He will beat one defender and jump over the second. He will even make the right read and the correct pass (hopefully).

The Suns offense and Steve Nash can do a better job moving the ball and find ways to get Amare cleaner looks but this one is on Amare. It is time for Mr. Max Contract to Rise and Shine.

....hopefully with a bit lot more ooomph than this.

Because he is a maniac, Ben from Blazers Edge broke down each of Amare's isolation plays with video. What I see is a) a guy with too much time on his hands and b) a lot of correctable things for Amare.

First, he makes those shots a lot more frequently then he did Sunday. But also Amare can attack Camby more directly into his body and force some whistles. He seemed to give Marcus size too much respect. It's as Amare said before Game 1, the way to deal with Marcus is to dunk over him. Amare can bully his way into Camby's body and then rise up over him. He's going to draw a lot of fouls that way.

Mostly, this is just Amare playing tentative and not playing Bully Ball. Amare knows this and he's bounce back.

I just hope Ben does another one of these video break-downs of Amare after Game 2 when the results are different.