Share All sharing options for: Phoenix Suns Run Portland Trail Blazers Out of Town to Even Series

The Suns said the key to this game was playing better. Mission accomplished.

From the tip it was obvious that the Suns were going to push the ball and play at their tempo even if they were missing some of those early looks. They kept at it and sure enough, Nash had nine assists before 10 minutes ticked off the clocked as he repeatedly found Hill and Richardson in transition.

Suns did a great job out of the locker room (31-19, 3rd Qtr) to keep the pressure on and extend the game from "big lead" to "blow out" before the Travis Deiner and Dwayne Jones show began.

No day but today, suckas!

Jason Richardson was ON FIRE, hitting 4/5 three's and getting to the rim as well. He finished with 29 points and 6 rebounds

Nash and Amare were both excellent and they each rose to the occasion in their own way. Nash by pushing the tempo and Amare with great paint play on both ends

Channing Frye had a forgettable game - 3 pts, 4 reb in 28 minutes. Suns need more from him

Leandro had some nice buckets, but I hate the way the Suns offense looks with him on the floor. He's a ball-stopper 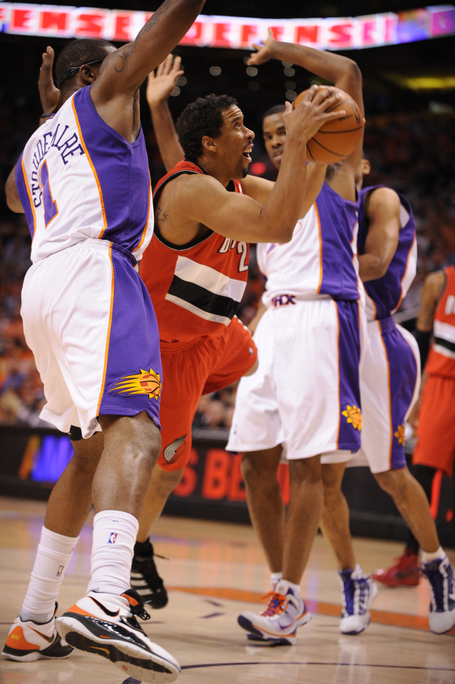 Grant Hill, who checked Miller, held Andre to 12 points on 11 shots. That's some solid D right there but as the picture above shows, it takes a village to stop a 'Dre.