No Reason To Fear, Suns Fans. The Shots Will Fall

Share All sharing options for: No Reason To Fear, Suns Fans. The Shots Will Fall

Nothing in the playoffs comes easy. We can talk about the Suns' failure to make shots in the fourth quarter, failure to push the ball after getting countless stops, failure to execute and hold on to the ball, failure to compete on the defensive glass in the first half.

There were a lot of failures but the biggest was the inability to match the desperation that Portland felt, their pride at getting blown out twice and their need find a way to even the series to avoid the dreaded 3-1 deficit.

Brandon Roy coming back early was a surprise boost and his two fourth quarter buckets were huge, but all the Suns cared to talk about today was their inexplicable failure to execute their game plan.

"I didn't think we had the same energy level last night that we had in the previous two games. I don't know the reason for that. It was an important game," Coach Gentry explained and went on to comment about his team walking the ball up the court in the second half. "I don't understand it. I really don't. That's the one thing we have to get away from."

Gentry laid the blame on the entire unit, saying the wings needed to run more to give Steve opportunities to advance the ball, Nash needed to push harder and the bigs needed to run the court to set early screens to initiate the quick drag plays that are so effective before the defense can get set.

There's no excuse for not showing up in a playoff game, but so far in this series the Blazers have rolled over twice while the Suns were at least competitive in both losses. The energy level might not have been quite as high in Game 4, but it was always going to be hard to match the boost from Roy's return and the Blazers' desperation.

Returning to Phoenix tied, Gentry welcomed the pressure that is now on the Suns in Game 5 to maintain their home court advantage.

There wasn't much talked about in the way of specific adjustments. The team was happy with the shots they got and felt like they just need to knock them down.

"We'll take all of those shots. If they want to give us those shots, we'll take those shots tomorrow night also. Those are shots that we made over the last two games and we just didn't get them on the basket. And we got to do a better job on the offensive rebounding. The 17 second chance points is too many." - Coach Gentry

Nash agreed that more than other match-ups it really is as simple as the Suns making or not making their threes based on the way the Portland defense is collapsing in the paint or trapping him on the pick and roll.

Obviously, you can't just live and die behind the line but the way for this team to get open looks in the paint is to push the tempo and, as Coach Gentry explained, that means defending, rebounding, and creating turnovers.

Nash wasn't unhappy with his own performance in the game overall but he did offer this, "What I am not fine with, I've got to find ways if we're not making shots to not go two quarters and get up one shot and only a couple of assists. I've got to find a way to be more aggressive."

And while Steve was fine with coming back early in the fourth quarter in the last two games, Gentry admitted that he needs to be more patient with his bench and he wants to bring Steve back around the 5 or 6 minute mark in the fourth to avoid him wearing down.

Dragic hasn't had a stellar series but he's been adequate. In his two worst games (Games 3 and 4), he was even on the +/- scale meaning the Suns didn't gain or lose ground while Nash rested. In his two best games, he was +8 combined.

Gentry had said before the series that he wouldn't tighten up his rotations and yet he's been unable to resist the urge to put Nash back in the game. We'll see how he plays it in the fourth quarter of Game 5 if it's close again.

Nash, playing through some pain

"I guess I can talk about it now but I tweaked a muscle in my butt so to speak and actually had a hip-socket impingement, that's what it's call. It happened in shoot around before Game 3 so I did struggle in Game 3 physically. I had some pain in Game 4 but I didn't feel like my mobility was limited like it was in Game 3 so I feel like that's behind me."

I guess it's understandable for Blazers fans who are listening to their announcers go on and on about a few physical plays, and frankly if Batum is getting frustrated enough to shove Amare over a slight bump then the Suns are already winning the mental battle, and the Blazers, inexperience and weaknesses are showing through.

Amare's been on the other side of this game. He called out the Spurs in 2007 for playing dirty and he knows just how far that kind of whining will get you in the playoffs.

This time, he's got a more mature and serious approach to the matter.

Asked about Batum's comments that he (Amare) targeted his (Batum's) shoulder with an elbow bump, Amare would only say, "No comment. It's physical play out there and both teams are being physical. I really have nothing to say about that."

Asked about being called dirty, "I'm not getting into it with the verbal with them."

Good for you, Amare. You keep them worrying about you and keep them whining and we'll see how far that flies.

Amare's split lip today certainly was visible evidence of the physicality. His not complaining about it is a sign of his maturity.

Amare was all business today. No smiles. No goofing around. Amare wants to win.

"It's the playoffs, man. It's just that simple. It's win or go home, so there's no time for fun and games. It's strictly business. It's strictly about winning. That's what we've got to understand. I've been to the postseason a lot now, I know how important these games really are. I hope that we all do and we're able to take care of the game tomorrow."

Jared Dudley put it best and echoed what I was thinking I would write about Roy's return. JD noted that Brandon doesn't have his legs under him and likely will be sore after his first game back. The Blazers are certainly a better team with him on the floor (mainly because of Rudy's struggles), but there's no way he's 100% and the Suns need to exploit that.

There wasn't time before Game 4 but on Monday, look for the Suns to run at Roy even more and post him up if he's guarding Jason Richardson. Defensively, they should back off him and make him prove that he can hit shots and when he does drive, don't get overly aggressive going for the block because he's not likely to be as explosive.

It is common for players to have a great first game back after an injury, but for that to tail off for the next few games while they fully recover.

Other notes from practice interviews 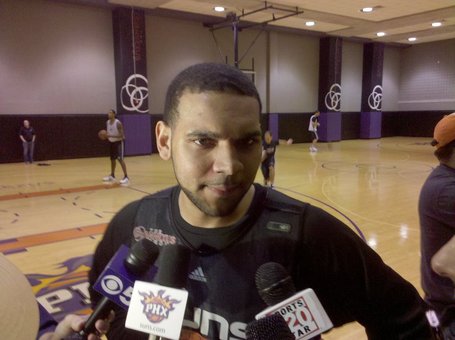