Fun With Numbers: Breaking Down the Suns / Blazers Series

Share All sharing options for: Fun With Numbers: Breaking Down the Suns / Blazers Series

Hang on to your keyboards, boys and girl(s). We are about to blow your mind with numbers ... and charts ... and some graphs.

Earlier this week, I signed up for the new My Synergy product and finally had some time to really play around with it. Wicked cool stuff.

I decided to look at the Suns and Blazers play distribution and efficiencies and how they've changed over this series. So, how many pick and rolls do the Suns normally run, what FG% did they average in the season and how does that compare to this series so far.

If that doesn't get your heart pumping, you are not nearly the geek I am.

I grabbed the top four most frequently used plays for each team based on usage % and then the FG% and 3P% for those plays. I took the regular season average and then the results for Games 1 - 4 and the average for the playoffs so far.

That raw data can be seen in exquisite detail here and below. Same data, different display options.

And now for the fancy charts portion of our show. I have no idea if these help tell the story or not, but since I made them, I am posting them. 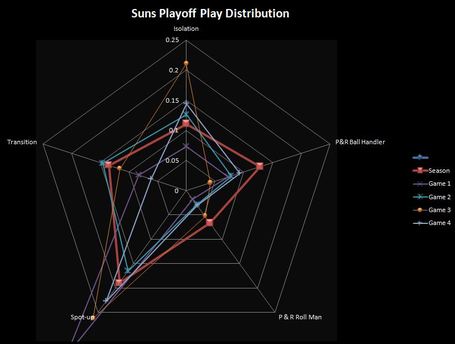 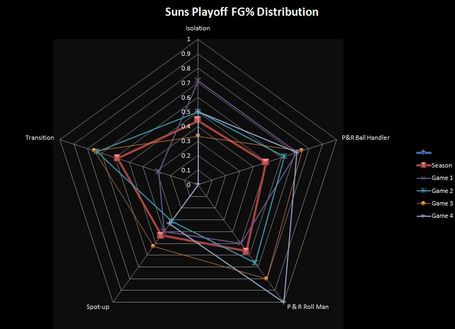 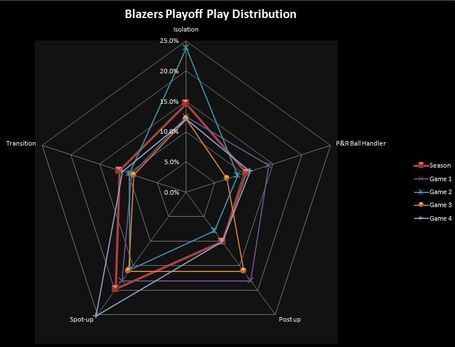 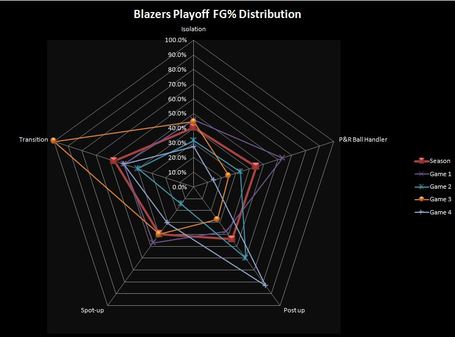 At the end of the day night, I don't think any of this tells us anything we didn't already know. The Blazers are taking away the Suns primary options but the Suns are stepping up and being more effective on the pick and roll opportunities they are getting, and the isolation play (mostly JRich, Hill and Barbosa) has risen to the occasion.

And shockingly, getting transition points does seem to be important to the Suns.

On the other side, the Suns defense is doing a good job, especially with the ball handlers since Game 1. Limiting Aldridge's effectiveness in the post is important moving forward and not letting Roy or anyone else for that matter get hot would be nice, as well.