Robin Lopez was able to rehab for the first time today after resting his injured back all last week.

As much as he obviously wanted to avoid talking about it, we (the AZ Republic's Bob Young and I) managed to stop him in the hall and ask a couple questions. His mood was dour and his responses crisp. He was not a happy big man but at least what he had to say was somewhat encouraging:

How did it react today?

You expecting to be back for the playoffs?

"I don't know, yeah. I can't really say anything as far as timetable. It differs from person to person."

And that was that.

His coach, GM and front court running mate had a few more words about Robin and what his loss means to the team. And by a few more words, we obviously mean more than 10 or 15.

"He's doing well, the pain has subsided. The rest has been good for him. He's starting on some light rehab today. We will reassess in a week. That was the plan all along. We are following the protocol and we will see how it goes."

"Very concerned (that Robin might not be back). It's a major set back but we'll see how it goes."

"We would never do anything crazy. We are much more concerned about (all our players') future than the present. We wouldn't do anything to compromise Robin's future. He's got a long, great career ahead of him. The only way he'll play is if the doctors unanimously clear him and feel like he's good to go."

"It's not like he's a guy that's averaging 20 points and 10 rebounds for us but he feels like that guy."

Gentry talked about Robin's ability to guard quality bigs without needing a double-team and said that they Suns missed having his presence and sheer size inside. But injuries happen and other big names in the West have been or are hurt and you have to play through it.

Coach said that they don't expect to know more about Robin's return for another week.

"It's kind of tough out there because Robin is such a big force and he's a big guy, he helps around the boards but we've been playing well and we just have to keep it going."

Watching Robin play and the impact he's had on this team over the past few months has been the brightest spot of a pretty bright season.

I've far more enjoyed seeing how fast he's progressed and how much his presence and size changed that Suns.

It's been Robin Lopez' force and inside dominance that have been the most fun to watch.

He might not be the most media-friendly guy (which doesn't mean he's a bad dude) but he's clearly been the "missing link" for the Suns potential playoff success.

Here's to hoping that Robin can make it back. Judging from his foul mood today, nobody wants him back on the court faster than he does. But Steve Kerr is right, they simple can't risk his long-term health and rush this injury. 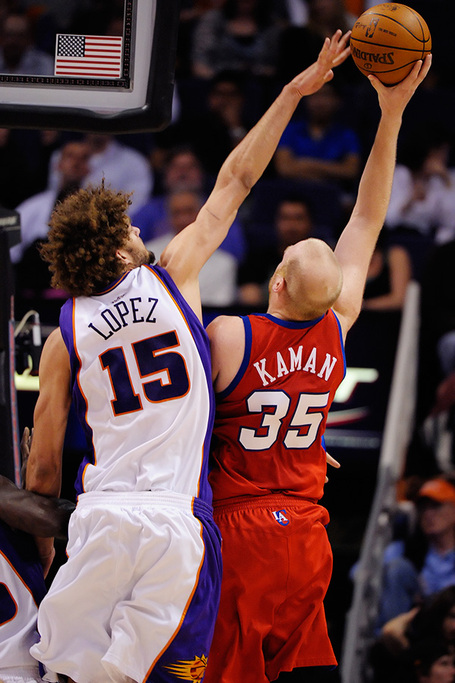