Using my fancy new My Synergy tool, I did some quick scouting on the Spurs Big Three.

Defending Manu on the pick and roll comes down to two things. First, if at all possible you want to force him away from the pick as JRich does in this screen shot. 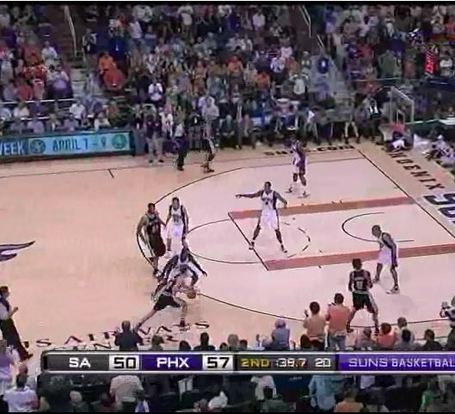 As we all know, Manu's a lefty (go lefties!) and so he sets up the screen so he can go at it and continue driving left. If the defender can get to the screen first and force him the other direction, his effectiveness drops considerably (.314 FG%).

Barring that, you always are better off going under the screen than chasing him over. His shooting drops from 42% to 34% in those cases.

Manu will only pass out of the pick and roll about 25% of the time as compared to about 42% for Nash. Over half of those will go to the roll man, which is always a high percentage play, so like most pick and roll situations, you want to force him to find a spot-up shooter for a lower percentage shot.

Manu is an effective spot-up shooter, hitting about 41% of his attempts in which his feet are set, but when you get him to put the ball on the deck and then pull-up, he drops to the lower 30s in shooting.

Run him off his spots and make him drive but then close the lane and make him pull up. Good defensive principles almost anyone.

In isolation, Manu obviously wants to drive and get to the rim and, of course, he's much more effective going left (47% FG) versus right (31% FG). In isolation defenders know this, so he is actually forced right more than he ends up going left.

Tony, like Manu, is much more inclined to attack off the pick and roll than pass (28% of the time). When he does pass he'll find the roll man over half the time, so again, the Suns want to force him to pass to a spot up shooter.

In this screen shot, Johann Petro slids over and denies Tony the lane and forces a missed dribble pull-up. 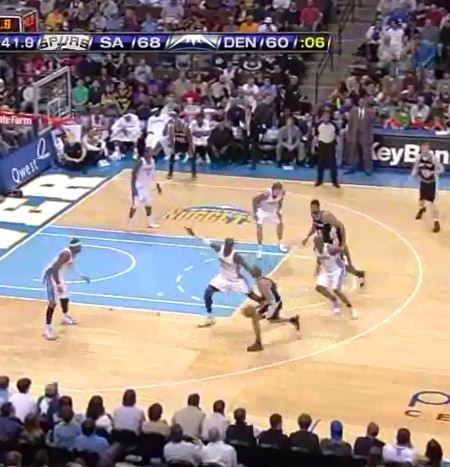 What you don't want to do (as the Suns found out when Shaq was here) is sag off and give him enough space to get set for a mid-range jump shot. Always best to crowd Tony.

Tony is a one-man fast break as evidenced by the fact that 17% of his total plays come in transition. He converts over 60% of those, so to put it plainly, stop the ball and pinch him off before he can get into the lane.

Tony doesn't isolate often (14% of the time) and when he does he's going to look to drive right, where he finishes 48%. If you can make him go left, his shooting percentage drop to 35%. The best option, of course, like Manu, is to get him to pull up for a jumper.

Parker's a very infrequent drive and kick guy so be ready to bring help if he does isolate.

Tim's overall post-up numbers are good. Shocking, isn't it? He hits at about a 51% clip. As we all know, he can turn either way and does so about 25% of the time for each shoulder and faces up for the other half of his attempts.

When he turns off his left shoulder, his best move is a hook shot and if he turns right, a jump shot.

Facing up he is much better driving baseline than middle where he shoots about 15% worse.

As you can see in this screen shot, Marcin Gortat forced him into a running hook across the middle which he missed. 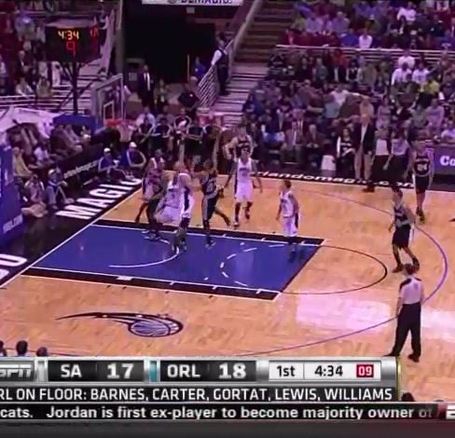 Tim is a good passer out of the post so you have to watch for cutters. Looking at some clips of when the Suns last played the Spurs, the few times the Suns brought a guard over to help, the uncovered guy slashed the lane and Tim found him.

Overall, the Suns actually played Duncan straight up in over 80% of his post-ups in their three meetings this season. Even when he was scoring on Amare or Frye in the paint, the Suns seemed willing to live with that in order to keep Manu or the other three point shooters from getting good looks.

The times when the Suns did bring help, it was usually the second unit where Dudley would come help and on one excellent possession trapped Duncan with Frye and forced a travel. On another good rotation, Dragic came from the weak side to contest a baseline drive and forced a miss.

Whether Gentry will stick with that plan or bring more help on Timmy remains to be seen. Given his age and the high minutes he played, I would be inclined to force him to score 30+ points in isolation as opposed to giving open looks to the other guys and risk letting them get hot.

A great example is the Suns win over the Spurs at home in December. Tim went one one one with Amare four times and Channing four times and was either fouled or scored on 7 of those. But later in the fourth quarter against Amare, he missed a shot and then turned the ball over on his last two attempts. The Suns won (116-104) and Duncan had 34 points and 14 rebounds.

Tim will pop out for a shot about 40% of the time and roll about 55% of the time. He's obviously much more effective rolling, but the Spurs don't run that nearly as much as the Suns. Who does, right?

The Suns will want to be alert and come from the weak side to take away the roll, but it's not a bread and butter play for the Spurs.

Disclosure: Synergy Sports Tech has provided Bright Side of the Sun with a free My Synergy account.