Suns vs Spurs By the Numbers...(and the numbers look good)

Share All sharing options for: Suns vs Spurs By the Numbers...(and the numbers look good)

I think I get why John Hollinger is one of the few national pundits that picked the Suns to win this series. All the others are going off history and reputation (can't blame them), but John is a numbers man.

And looking at the numbers, it's not even close. The Suns have a HUGE edge.

Before we delve in, understand that we are looking at round 1 numbers only. I am ignoring the regular season because the Spurs are playing far better now than they did all year due to their improved health situation.

That means what we are really comparing is not only the Suns and Spurs, but the Trail Blazers and Mavericks.

Which team should have provided the stiffer competition, Dallas or Portland?

In theory, you should say that the Spurs had the higher level of competition in that they faced the two-seeded Mavs and in that case, you expect their numbers to reflect that. But just remember that Dallas was a poor rebounding team and about even defensively.

The Suns defensive number could be inflated by playing the Blazers, while the Spurs had to stop a much better Dallas team.

On the other end though, I would say the Suns offensive numbers are more impressive in that Portland certainly played better defense in round 1 than Dallas.

Above is the game logs showing advanced stats via HoopData.com. 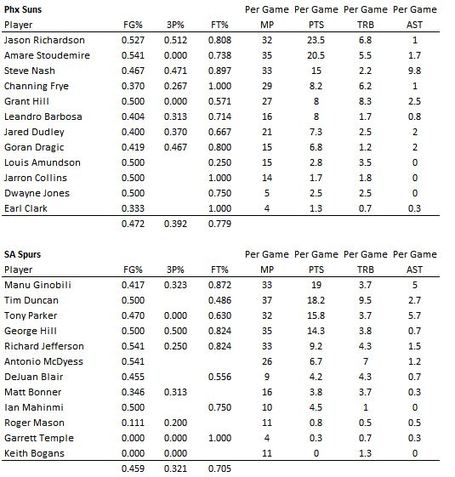 Above are the player stats for both teams in round 1.

And here's the best one. If you skimmed the rest, read this:

Not too shabby, huh. The Suns really have a big edge going into this series statistically -- plus home court. This could be the year...

Extra Credit: Be sure to head over and read this from PtR...

These aren't the Suns we know | Pounding The Rock
I'll say this as plainly as possible. This is going to be the best Suns team that San Antonio has ever faced in the postseason. And they will be highly motivated by their playoff history against us. There are definitely reasons for Spurs fans to be confident, but victory in this series is far from a foregone conclusion. I would not be the least bit shocked if Phoenix won this series, but I'm obviously hoping we continue using them as our postseason plaything. Regardless of the result, let's have fun watching it all play out, shall we? But don't assume anything. Not this year.