Bench Play: A Look at the Lakers Second Unit

Share All sharing options for: Bench Play: A Look at the Lakers Second Unit

It is no secret the Suns bench is one of if not THE best in the NBA. They combine a solid blend of defense and offensive ability, athleticism, and gritty toughness that oftentimes provides that needed spark to turn a game around. You and I all know how awesome the Suns bench is, and the NBA has taken notice as well (took 'em long enough).

The Lakers swoon down the stretch of the regular season occurred due to a variety of factors: starters either injured, old (Fisher), out of rhythm, or playing at 75% since there wasn't a whole lot to motivate them. But a significant amount of criticism was aimed at a bench that wasn't all that deep and effective.

The Lakers lost a vital cog to their second unit this off season when Trevor Ariza took the Houston chedda. Maybe financially a smart move for him, but not so smart if you're a guy motivated by rings. Enjoy The lone star state, Trevor. You pretty much are the lone star out there.

So, I ask the question, will the Lakers bench be an Achilles heal in this series?

In the playoffs, the Lakers usually go 9 deep. Below is a brief analysis of the Lakers second unit numbers in the postseason.

Odom's size and strength represent a significant problem to the Phoenix Suns in terms of matchups. Who do the Suns stick on Odom? Channing Frye perhaps? That's a tough assignment for Channing. But most defensive assignments are tough for Channing Frye. He has improved, I'll give him that. And he has proven to have a bit of a nasty streak he'll need to compete with Odom.

Robin Lopez has been announced the starter at the 5. He'll no doubt get time against Odom, and this presents perhaps the best matchup against the versatile Laker. Yes Lopez isn't in tip top conditioning shape, and yes he gives up muscle and experience. But his length and aggressiveness makes the matchup interesting. I can see these two getting nasty as the series goes on.

If there's an adjustment to be made, look for Lou Amundson to get a shot at neutralizing Odom with his pony-tail induced athleticism. Odom probably will attempt to run Lou over on the way to the rim, but Lou's a pretty smart guy, and fearless. Fearless Lou Amundson. 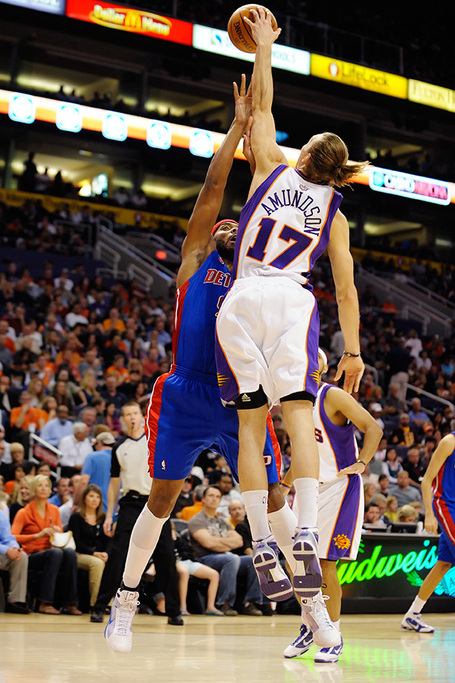 From a scoring standpoint, Odom understandably becomes less of a factor the farther away from the rim he gets. It goes something like this (stats from Hoop Data):

On paper we're most likely looking at Channing Frye manning up on Odom, unless Lopez comes off the bench (dependent on a multitude of factors). While Channing's defense has improved throughout the course of the season, Odom's size, length, and strength may be too much for Frye to handle. On the defensive end, look for Frye to draw Lamar out to the three point line and keep him off the boards. This could be an interesting matchup, one the Suns could benefit from as long as Channing is knocking down his shots from deep.

Jordan Farmar's numbers don't do him justice. He doesn't play significant minutes, he's not a scorer, his assists are non existent, and while his 3-point percentage isn't fantastic, we can say he's a threat from deep if the Suns leave him or are slow rotating. He's an energy guy, aggressive, scrappy, brought in to spell ol' man Fisher, move the ball around, and get other guys going. Farmar is part of some pretty successful five man units the Lakers have utilized (check #4 below), of course Kobe is usually in the court with him. Against the Suns in the regular season he averaged 4 points a game and didn't do much else.

Goran Dragic's length and athleticism should pwn this guy. I like the matchup a lot.

Brown has tremendous athleticism and can score from in and out if not properly respected. He's inconsitent, but reports having him finding it of late. Brown dropped in 12 points on 5-10 shooting in the 3rd game of the Jazz series, and overall 10-31 in this season's playoffs. Leandro Barbosa most likely matches up against Brown at the 2. We know LB has his defensive liabilities but he has the quickness to stay with Brown. Still, Shannon has the size advantage over LB and could force an adjustment. LB-Farmer and Dragic-Brown may be the better matchup for the Suns.

Those of us who watched Luke as a Wildcat probably wonder how the hell he's still in the NBA. You may have read this, and while the source is certainly reliable, that isn't the whole picture. Luke Walton has an NBA job as he is kind of a Jared Dudley-lite type. The high basketball IQ guy who does the dirty work, spots the open man, hits the boards. Only he can't hit 3's with the frequency of JDudz and he's not all that athletic.

The whiney Euro we love to hate hasn't played in the postseason, so I have nothing on him on that front. We know he can catch fire from beyond the arc and take it to the hole. He's also considered a defensive specialist and could see action against starters such as JRich, or attempt to smother Dragic or LB.

Obviously I'm making assumptions about these match ups, and depending on effectiveness, we're likely to see a whole lot of maneuvering on both sides.

Below is some more food for thought brought to us by 82games.com. Below are the Lakers 5 man units (not including the starting unit)

On paper the Suns bench has a significant advantage in this series. Their versatility will most likely stretch the Lakers starters minutes since the Lakers pine dwellers simply aren't that deep and talented. If history tells us anything, the Lakers will play a mix and match with 2-3 second unit guys combined with starters out of necessity. The Suns can exploit these match ups especially in the back court, depending on the night (there's a different hero every time out, yes?) Specifically Dragic should be able to pwn Farmer and force an adjustment that can be manipulated somewhere else. Frye can draw out his man out of the lane, thus opening up the wings to drive to the hoop or feed the likes of Lou and slashers such as Dudley and LB. Odom will be a handful, but that's no big surprise.