I originally picked the Suns in six way back in olden times when the Suns swept the Spurs and locked their spot in the Western Conference Finals.

Since then, here's what's transpired:

Robin Lopez continued to progress and impress in practice up to the point of getting feisty with Dwayne Jones and Jarron Collins. Steve Nash's eye healed and he rested. Grant, Jason and Amare rested. The Suns had time to game plan against Kobe and Pau on one end, the Lakers gimmick strong-side zone defense on the other.

For the Lakers, they got rest for their guys, too, including a banged up Kobe and Andrew Bynum whose knee was supposed to improve, but didn't. Phil Jackson showed his hand to the refs and his ass to the rest of the league and so-called experts all lined up behind the obvious choice, ignoring these crucial points:

I have heard no solid reason why the Lakers will win this series besides the same smoke monster-inspired pablum we got before the Suns swept the Spurs.

There are still several key unanswered questions going into the series. Here are my four main areas of uncertainty.

When the Lakers are at their best, Bynum is grabbing 10 plus rebounds, tipping balls, deterring shots in the paint and occasional finishing lobs and even showing some improved individual post moves.

When Robin is at his best, he's keeping the other team's best rebounder off the glass and creating space for Amare and the wings to grab boards. He uses his length around the rim to alter attempts and is very good at not picking up cheap fouls. In fact, Robin's foul rate as a starter is a very respectable 2.4 per game compared to 2.9 for Bynum. Both guys aren't afraid to deliver a hard foul and neither guy is asked to play more than 30 minutes.

Robin's offense this season was the biggest surprise. He showed that he is very good as a roll man, catching and finishing both bounce passes and lobs. His agility in the lane and touch around the rim are impressive.

According to data from Synergy Sports, Lopez finished 15 of 17 attempts out of the left side pick and roll this season and 11 of 16 from the right side. The rest of Robin's offense comes from basket cuts, which basically are dump offs when Robin's defender is forced to leave him to help on Nash or Amare or Grant or Jason. Robin's post-up game is rated "below average," so I wouldn't expect to see him trying any back to the basket stuff against Bynum.

Bynum, on the other hand, is a traditional post up big where he's hitting about 50% of his attempts. Andrew will also score off basket cuts at a high rate and both are excellent scoring off offensive rebounds.

Where this gets interesting is matching up Robin's propensity to score on the move versus Bynum's knee swelling-induced lack of mobility. On the other end, Lopez isn't a great post defender, but he at least can force Andrew to either shoot over his long arms or make an athletic post move that he may or may not be able to pull off right now.

Most importantly for the Suns will be keeping Andrew off the glass by putting a body into him before Bynum can elevate for the tip.

Robin: Will his conditioning allow him to play 20+ minutes? What can we expect from his offense and touch?

Andrew: How well can Andrew run the floor and will he be able to keep up with Lopez who (normally) gets up and down very well? How will Bynum defend the pick and roll with Nash and Lopez or Nash and Amare? Will Bynum have the mobility to cheat off Lopez to zone the strong side and still recover back to keep Robin off the offensive glass?

Both teams like to start their big men but neither are typically on the floor in crunch time. If this holds true, Gentry's life is simplified as he can match Robin's minutes with Bynum's without having to make an adjustment.

If Jackson changes things up and starts Odom instead, Gentry will have to decide if he stays with Lopez early to try and create a size mismatch in the Suns favor (yup, that's right) or if he goes with Frye early to match up with Odom.

A lot of discussion has centered on how the Suns are going to stop Gasol and his fancy feet around the rim but Amare's offensive threat has been the key to the Suns success in postseason so far.

Coming off a post all-star break run of 27 points, 10 rebounds and 56% shooting, both the Spurs and Blazers were forced to commit extra defenders to stop contain Amare. To an extent this worked, as Stoudemire "only" averaged 20.5 ppg in the first two rounds, but the packing of the paint led to the Suns getting a ton of wide open threes, which they were able to convert efficiently.

The Lakers will have to make the same choice that McMillan and Popovich were faced with. Do they bring help on Stoudemire or do they try and let Gasol, Odom and Bynum contain him with single coverage?

If history is any guide, the Lakers will have to bring help because Amare has averaged 1.3 points per possession (66.7 FG%) against Gasol over the past two seasons. The Lakers also can't risk Gasol getting into foul trouble, especially if Bynum is playing on a bum knee.

Here's an interesting side note: When Amare has guarded Gasol, he's done a better job than the other way around. Pau has averaged 1.04 ppp and 59% shooting against Stoudemire.

Given that the Lakers' primary defensive scheme is a strong side zone, Amare will probably see a second defender between his man and the basket when he gets the ball on the elbow.The defender typically comes across the lane but doesn't committ to the trap, which allows him to recover back across the lane if the ball is swung.

To attack this, the Suns will try and attack the middle of the floor and also run a lot of motion sets and screens with guys constantly crossing the court from side to side. This will force the Lakers to either switch, which could create mismatches, or at a minimum work hard to constantly fight through screens.

What the Suns want to avoid are isolations where the Lakers can load up on the ball side of the floor while the rest of the Suns stand and watch. For Amare, this means catching the ball on the move in different ways outside of the pick and roll. I would be shocked if we don't see some interesting new plays from Gentry. For example, Grant Hill hitting Amare cutting off a Nash screen with some other action from Jason and Robin or Frye to keep the defenders in motion.

Other match-ups against Amare

When Bynum and Gasol are on the floor with Amare and Frye, we would expect to see Andrew on Amare. This is one case where Amare can iso effectively at the elbow. He should be able to blow right by Bynum and attack the help defender who will probably be Kobe or Artest. Amare can either continue his attack or hit the cutter flashing in behind the Lakers help defense.

Will the Lakers try and single-cover Amare with Gasol or even Odom/Bynum at times so they can stay home on the Suns shooters?

Will the Suns be able to find ways to get Amare the ball on the move coming off screens to take advantage of the Phoenix speed and mobility edge and force the Lakers half-court defense to work hard on every possession?

The Suns' best offensive player is Steve Nash and he's matched up against the Lakers' worst defender and a guy who's not going to push him on the other end of the floor. This advantage can't be overstated.

In the first two rounds, the Lakers were forced to collapse against the Westbrook and Williams or put Kobe on those dangerous guards. They were able to to get away with this because neither the Jazz or Thunder ever had enough shooters on the floor to make LA pay.

If you think Fisher can't guard Nash, what's going to happen if they try and "hide" him on JRich or Grant Hill or even Jared Dudley? The only time Kobe might be able to put some minutes on Nash is if the bigger Shannon Brown is in the game, but with Derek playing 34 minutes per game in the playoffs, those situations will be limited and certainly not in crunch time. Could you imagine Jackson benching Fisher for Farmar or Brown late in a close game? Me either.

This season in 4 match ups, Nash is shooting 69% as the ball handler on the pick and roll against Fisher. As you can see from this screen grab, the Lakers bigs don't often trap (especially if the pick and roll is early in the clock) and Fisher simply lacks the foot speed or size to bother Nash if he fights through the screen. 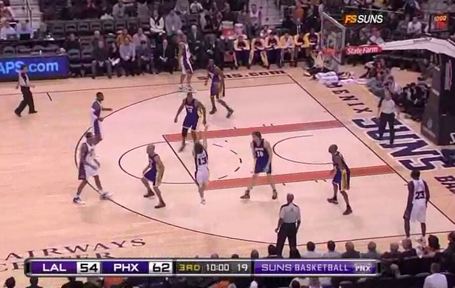 On the other end of the floor, 70% of Fisher's offense against Nash is spot-up shooting where he hit 40% of his no-dribble shots. No Tony Parker pick and rolls. No Andre Miller isolation drives. No Jerryd Bayless transition baskets. In other words, all Nash has to do on the defensive end is decide when he can cheat off Derek to help on Kobe or Pau and when he should stay home and not allow Fisher to hit a huge three late in a game.

How on Earth do the Lakers hope to contain Steve Nash?

The Lakers are the best offensive rebounding team left in the playoffs. They grab 29.1% of their missed shots (Suns, 26.7%). Against the Thunder and Jazz, they stayed in the offensive court and aggressively pursued the ball to create second chance opportunities. Since they really only have two primary offensive weapons on the floor (Gasol and Kobe), they need these extra opportunities to put points on the board.

The Suns have done a fantastic job on the defensive glass this postseason (without Lopez) after a dismal showing in the regular season. The Suns in fact are ahead of the Lakers in this category:

Will the Lakers continue to pursue to offensive glass which leaves them open to Suns fast break points on leak outs?

Will the Suns continue to get impressive rebounding performances from the wings and bench or will Artest and Kobe step up their glass game?

What impact will Robin Lopez have in keeping the Lakers from playing "volleyball" with the loose balls?

The Lakers primary two line-ups are:

For the Suns there are three primary line-ups used:

This is just another way of showing that the Lakers rely on fewer players. An even better way to see that is in these charts: 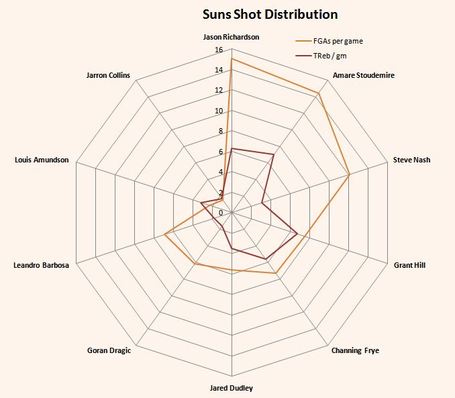 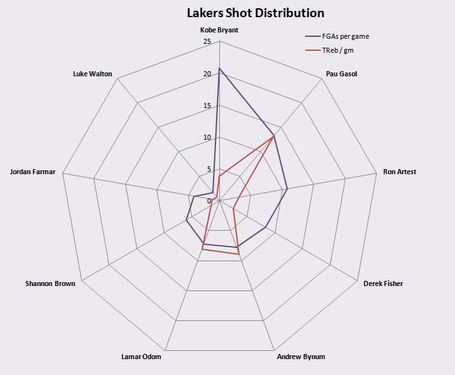 These charts show where each team gets its points and rebounding production. It is very easy to see that the Suns have a much more balanced offensive attack and, as a team, are rebounding better.

With the Lakers, if you can D up on Kobe and Gasol and either force them into inefficient shooting or take the ball out of their hands, you make the Lakers do things they don't want to do.

For the Suns, getting everyone shots is part of the team's DNA. Load up on Amare and Nash and JRich, Hill, Frye and Dudley can beat you. Or even Dragic. Or Barbosa.

Rebounding is the same thing. The Lakers need Bynum, Gasol and Odom to grab boards while the Suns pack mentality is much harder to defend against.

There's no doubting the individual talent of the Lakers' top three players but the Suns group commitment to winning should be the difference in this series.