Can Lamar Odom play this well for an entire series? Seriously, Lamar Odom was incredible and Gentry rightly called him the difference in the game.

Can Ron Artest keep hitting shots when it matters?

If so, this series will be over fast. But I don't think so. I certainly don't hope so. This was the Lakers best playoff game of the season by far. They were the (far) better team tonight. We will find out Wednesday if they are the better team overall.

The Suns can be pleased that the Lakers never got close to shutting them down despite only shooting 5 for 22 from three. Robin played very well in his debut and, in fact, well out-played Bynum.

Now it's time to see if the Suns are really the team we thought (hoped) they were. Resilient. Prideful in their defense. And able to take a punch and get back up.

If they are and if this truly was the Lakers best shot, then Game 2 will have a happy ending for the Boys in Orange. If not, we will be eulogizing a great season.

I wish I had more wisdom to share, but it is what it is and it was bad. Real, real bad.

So bad that Phil Jackson had to comment about it with his first sentence in the post game presser, "Well, you know it was a surprise for us. We thought this was going to be a close game."

The Suns were still very much in this game until the third quarter when Kobe went off for 21 points on 7 of 10 shooting and 6/6 from the line. Coach Gentry wasn't all that unhappy with the way his team played Kobe, stressing that when he's shooting like that, your only option is to double him, which Phil Jackson expects the Suns to do, but it doesn't sound as if Gentry is so inclined.

His concern was more about the middle drives the Suns allowed, especially to Odom and he was particularly critical of the team's perimeter defense.

There was a lot of talk about the Suns missing open threes and both teams expect that to change next game, but the reality is, the Suns offense was just fine. 107 points on 49.4% shooting has to be enough to win a playoff game. The adjustments for the Suns must come on the defensive end.

"We've got to play really, really solid defensively, try to make everything as tough as possible, try to limit the paint touches and catches and offensive rebounds," Nash explained.

At the same time, Steve explained that the Lakers aren't going to give up their biggest advantage, "They're probably going to continue to be taller than us as the series goes on."

The strangest part of being in Staples Center wasn't the court-side post game brawl between Mr. Courtney Cox and some security guards. It was this crazy Lakers fan, Vick, who is allowed into the press conferences and isn't shy about asking plenty of questions.

Nash even called him out on it. Instead of answer this guy's question, he wanted to know why a guy with a New York accent was wearing all this wacky Lakers gear.

Nash: It's just disappointing you've got a Lakers top on. That's all I'm going to say.

Wacko Fan: You're in my town, my brother.

Nash: New Yorker, this is our town? 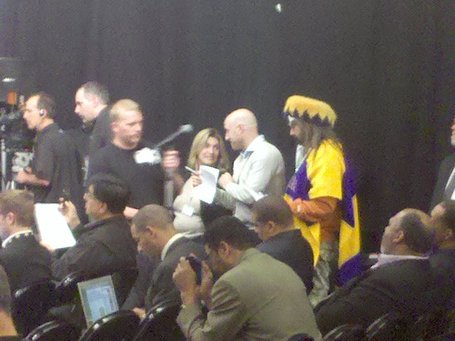 It's only one game...but boy it feels a lot worse than losing Game 1 to the Blazers doesn't it?

Note to the asshole who broke the window out of my car while parked in the convention center garage. FUCK YOU!