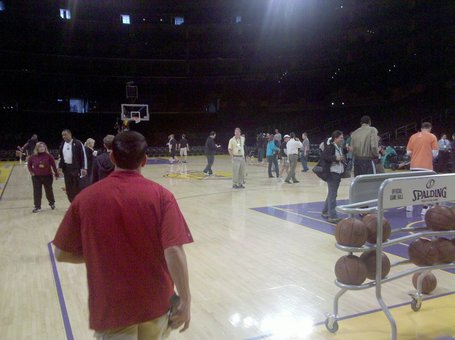 If you were expecting the Phoenix Suns to be hanging their heads the morning after getting run out of the Staples Center ... well, they weren't.

By 10am, they were right back on the floor in front of the empty seats whose cheers rivaled that of a Lakers home crowd. They were loose and serious. Focused and confident. Determined, disappointed, but not quite desperate.

"Guys, I know everyone expects for us to be down and out, but shit ... it's one game. It's one game. They played great, we didn't. You have to give them credit and you've got to move on. That's what the playoffs are," Coach Gentry explained with some measure of exasperation in his voice.

The Suns haven't lost two games in a row since January and they are confident they can correct the mistakes of Monday night and give a better showing.

Most notably, that means hitting open shots and, more importantly, denying lane penetration by closing out on shooters in such a way as to force them baseline and away from the middle of the court.

Grant Hill gave some inkling that the Suns didn't play hard. He wouldn't actually say they didn't play hard and he felt like he played very hard, but at the same time he ... oh, hell. This is what he said:

You know what he means? I think I do. The activity level just wasn't the same on the defensive end. The Suns appeared to be on their heels, waiting for the Lakers to attack. It's not a good look at all.