Share All sharing options for: WCF Game 2 Shoot Around Notes: Time To Shine ... (or fade)

The Suns have to play better tonight. Genius, huh?

There's a lot that can be speculated about the Suns being overwhelmed by the moment, the Lakers stepping up their game as they get closer to the Finals, or the rust coming off too much rest. Who knows and frankly at this point, who cares?

Nash has preached all year that you can't get too high or too low with the results of each game. Fine, I've bought into that and am totally willing to give the Suns a mulligan for Game 1. No excuses needed.

A win tonight, and all is well with the Planet Orange. Another Laker blowout tonight, and it is time to wave the white flag. A close loss and at least the Suns salvage some pride and can try and extend the series, but let's be realistic here: the Suns are not coming back from an 0-2 deficit to this Lakers team unless Kobe's or Andrew's knees implode or Sheriff Joe detains Pau Gasol on immigration charges and Ron Artest for possession of Crazy Pills when they land at Sky Harbor.

Amare's comments are just that. Talk. Perhaps he misspoke or maybe he's trying to generate some motivation for himself to step up his game and bring the Bully Ball. The Suns can't afford for him to have another night like Game 1. Even Steve Kerr said this morning that he had no impact on the game. That's not Max Contract kind of talk. Amare needs to beast it up. His team needs it and he needs it for his career.

So yeah, this is a must win game for the Suns if they want to stay in control of their destiny and get to the NBA Finals. All hope won't be lost with a loss, but the Smoke Monster will certainly be making an appearance.

They are understandably confident over at Silver Screen and Roll. Can't blame them either ...

Memo to the Phoenix Suns: The Lakers are your new demons - Silver Screen and Roll
Just as the Suns got over the hump against the Spurs, the Lakers look ready to step in and become Phoenix's new foil.

Lakers-Suns Game Two Preview: Taste the Adjustments! - Silver Screen and Roll
the Laker offense is in firm control of this matchup right now. Phoenix simply isn't stocked with skilled individual defenders. They don't have the speed to stay in front of guys. They don't have the strength to push opponents out of their comfort spots. They don't have the length to bother shooters. And frankly, they don't play with the orneriness that could make up for some of these physical shortcomings. If the Lakers stick to their gameplan and play to their strengths, Phoenix won't be able to lay a glove on them. 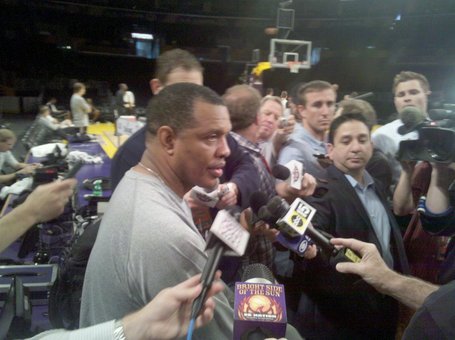