Ignore this one unfortunate play at the end of the first half of Game 1 and come with me into the numbers ...

Kobe scored 40 points and hit 13 of his 23 attempts. Interestingly enough, 7 of his 10 misses came against Grant Hill.

So having some time before Game 2, I broke out the Synergy Sports machine and looked at how Grant was effective against Kobe even on a night where Kobe was hitting amazing shots.

What I saw in looking at all the possessions was Grant playing up tight on Kobe and still managing to deny him penetration. Typically, if you get too close to a guy like Kobe, he's going to go right by you, but time and again Grant was able to cut off his first step and force a harder shot.

Even when Kobe did get back, Grant he was able to recover and contest the shot, as in this play: 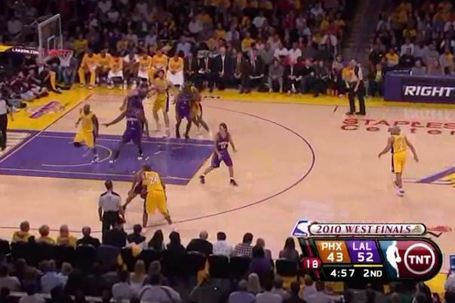 Kobe drives and what you can see here is the angle Grant takes to not foul Kobe while he's dribbling, but still get to the middle of the lane to cut him off. 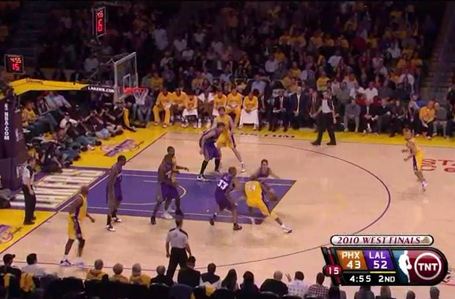 Grant then attacks Kobe's right hand and forces Kobe into a very tough step through move to the left, which he missed. 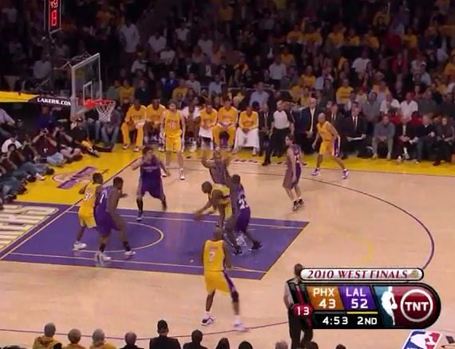 Kobe did make four shots against Grant, but three of those came when Kobe used a screen and either shot over the Suns big man who stepped out or, in one case, he blew by Robin Lopez, who tried to trap.

Here you can see Kobe coming off the Pau screen and shooting over Amare. 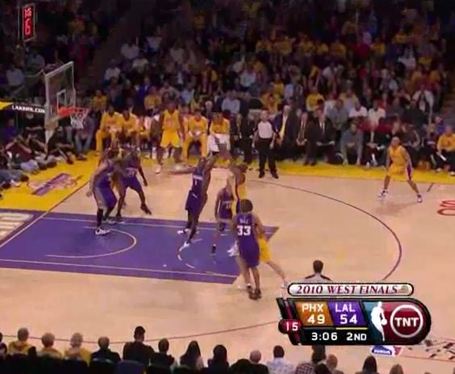 The only shot Kobe made against Grant in isolation was a very tough jumper and you can still see how Hill is focused on Kobe's right hand. 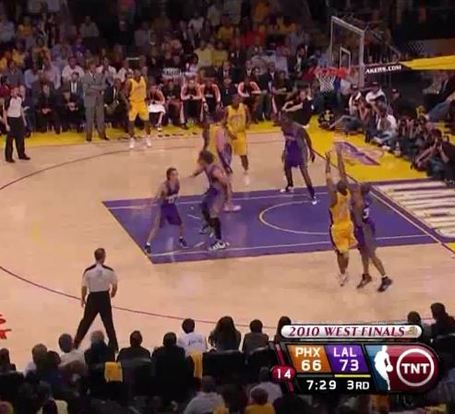 Unfortunately, Grant only played 21 minutes in Game 1. Partly because the game was a blowout, but in large part because of foul trouble.

Grant had four fouls by the middle of the third period. When Grant picked up his fourth (and the technical), it was an eight point game with about 6:45 to go. After Grant came out of the game, the Lakers went on a 13-4 run in the next four minutes to blow the game open.

I looked at all four of Grant's fouls. The first was a very questionable offensive foul when he posted up Fisher and spun baseline. They called him for hooking his off hand. Not a good call. His second was when he reached in to tie up Gasol. Again, questionable. The third was a reach in where Grant knocked the ball away from Kobe and the fourth was some two-way pushing that Grant was called for.

Easily, two of those fouls could have been no-calls. Those are the breaks of the game.

How did the rest of the guys do against Kobe? Not so good, obviously. Kobe went 6 of 8 against Dudley, Richardson and one possession against Barbosa on a rotation.

Dudley's D on Kobe gave him a lot of space with the intent of baiting Bryant into taking a jump shot. But in this play early in the game, Kobe uses the space that Jared game him to drive by and get into the lane, where he forced Jared to foul. It was a foul. 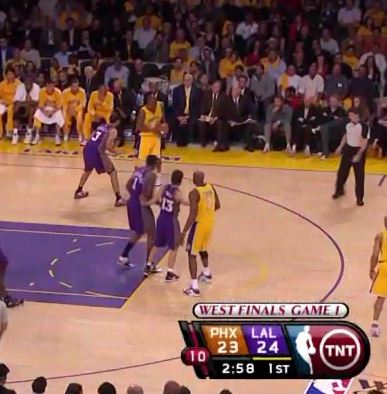 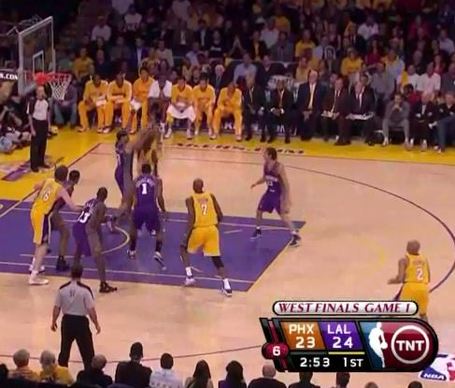 So yes, Grant Hill did play excellent defense on Kobe. Let's hope he gets the chance to stay on the floor longer this time and watch to see if Jared plays a bit closer to Kobe or if not, if Kobe is still aggressive or if he settles for the jump shot.