Watching Wednesday night's Suns/Lakers Game 2, one thing that struck me in real time was how many different defensive schemes the Suns tried to use. I called it out in the recap after the game and on today's podcast with The Basketball Jones.

My point was to emphasize how different these defensive sets are from the way the Suns having been playing for the past few months.

During the middle months of the season, when the Suns were a sub .500 team, one thing we frequently saw was Gentry using a 2-3 zone. It worked at times against certain teams, but all along Coach insisted that the zone wasn't a good option for more than a few possessions and yet on several occasions, it was overused and led to blown leads.

Players insisted that the zone defense not only had technical flaws that could be exploited, but went against the team's core defensive philosophies of accountability and simplification. When the team improved over the later part of the season, we rarely saw the zone employed. The Suns basically played the pick and roll two ways and if there were adjustments for specific teams, they were relatively minor.

On Wednesday night, we saw Gentry throw every defensive scheme in the book at the Lakers to the point where the Suns appeared confused. I have to wonder about the negative effect that may have been caused by going back to all of these various tactics during a crucial game.

The defensive performance as we all know was a disaster, but I never felt it was fair to blame that on a lack of effort.

What I think we saw was a lack of confidence and an overuse of unfamiliar schemes, which led to confusion, bad rotations, and a lack of decisive and aggressive action on the defensive floor.

A lot the negative attention about the Suns defense went to Amare and it was certainly deserved for plays like the one below where he was passive and inattentive on this screen, which Pau easily slipped to get to the rim. 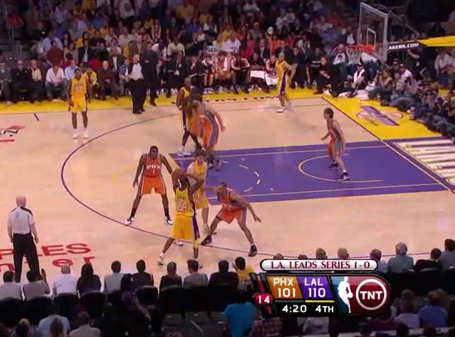 This is a play that you will probably remember because Doug Collins called out Amare here. What we don't know is how much the coaching staff had changed the normal pick and roll coverage and to what extent Amare was over thinking his defense due to unfamiliar and changing assignments.

Or maybe Amare just wasn't playing hard on the defensive end of the floor as most people seem to think. I don't know the answer, but as you can see below, Amare wasn't the only one struggling with these new defensive schemes.

Zoning up the lane

Let's walk through this play late in the game.

The Lakers bring the ball up the floor and the Suns appear to be in a normal defensive set with each defender covering his opposite position: 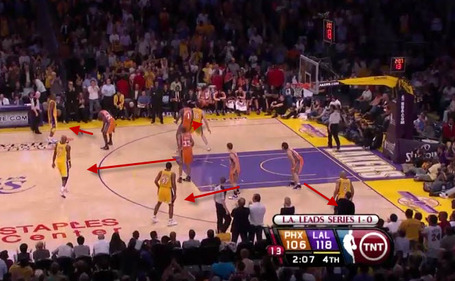 Then as soon as the ball goes to Pau in the post, the Suns switch so now Grant Hill is on the weak side near the rim and the guards move up to cover the corners and top of the lane. 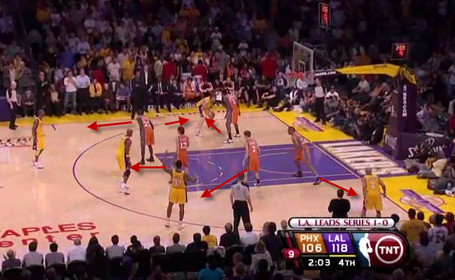 As soon as Gasol makes a move towards the paint and Odom flashes down the middle of the lane, the defense collapses so there are five Suns in the paint. 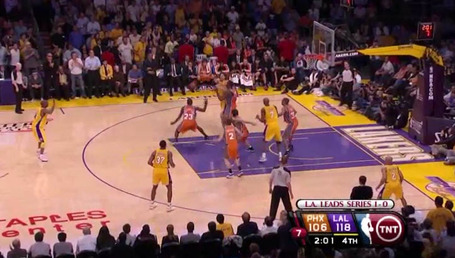 The ball gets kicked out to the weak side wing and both Nash and Dragic react. 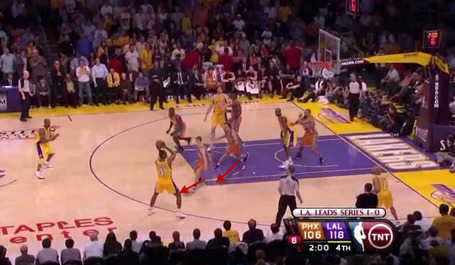 Artest swings to Fisher in the corner and because Nash had started towards Ron, Hill rotates out of the paint but Nash comes to Fisher as well, which leaves Odom wide open under the rim. I think you know how that ends. 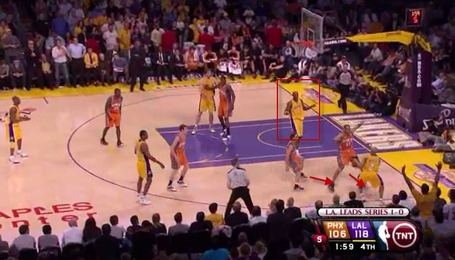 It might have been the point of the game or it could have been unfamiliarity between Nash and Dragic, but the Suns were confused and the Lakers moved off the ball perfectly and took advantage of the Suns' poor rotations.

It is worth noting that the Suns were very small at this point in the game and probably couldn't play man to man which begs the question, why not more Robin Lopez? Obviously at this point -- down 12 with Dudley having fouled out -- it is too late, but one adjustment I would like to see is not more small line-ups, but more big ones. Maybe even play Frye or Lou a bit at the three with Amare and Robin.

Here's another example earlier in the quarter where you can see Dudley manning up Kobe and Grant Hill (the power forward here) backing him up on the strong side baseline.

Nash is watching Kobe as Pau flashes down the middle of the lane and Kobe hits him with a perfect pass. At this point, Amare is screwed because he has Odom on one side, whom he can't leave and is supposed to box out, but he also now has Gasol, who was not his man, coming down the lane right to the rim.

In a perfect world, Amare reacts a tad quicker so he can contest Pau, but I have a hard time blaming him for not wanting to ignore Odom, that lucky dog. 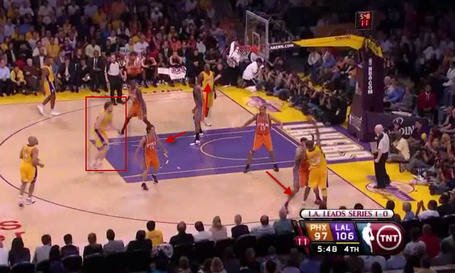 In real time, watching both of these plays -- which resulted in an easy lay up for Odom and Gasol -- you probably blamed Amare's defense. I certainly did. But watching again what you see is a combination of poor Suns rotations and a Lakers team that knows all the ins and outs of attacking a strong side zone since they run it themselves so often.

I am going to stick with my original assessment that the Suns poor defensive showing in Game 2 was more on the coaching than the players.

Busting The Myth Of The Lakers Pick and Roll Defense

There was a lot of talk and ink spent praising the Lakers defense for "shutting down" Nash on the pick and roll. That's bunk and now I have the numbers to back it up.

The Suns ran a lot more pick and roll against the Lakers than they did against the Spurs or Blazers and it was effective.

Anytime LA tried to cover the pick and roll with two defenders, Nash tore them apart as he always does. The Lakers were forced to bring a third defender into the mix and Nash, as he's known to do, found the open man.

According to Synergy Sports, 28% of all the Suns offense was Steve Nash derived pick and rolls. Against the Blazers and Spurs, that number was in the low teens.

27 of the 31 Nash pick and roll possessions resulted in field goal attempts and 18 of those were makes. That's a 67% hit rate, which is pretty darn good.

So, can we put to rest all the talk about the Lakers playing good defense on Nash?