Amare's Bully Ball Game: How Did He Do It and Can He Do It Again?

Share All sharing options for: Amare's Bully Ball Game: How Did He Do It and Can He Do It Again?

Jumping right into the meat of this thing:

In Game 3, Amare had 31 offensive possessions, which broke down this way:

Gasol was the primary defender on 21 of those 29 offensive possessions.

Amare finished with 14 of 22 field goal attempts, went 14 of 18 from the line and drew a total of 12 fouls on Laker defenders while only committing 3 of his own (2 offensive fouls).

Pictures and comments after the jump ...

Here's a classic Amare left elbow drive. Note all the action by the Suns on the weak side to occupy the Lakers defenders and distract them from being able to focus on Amare and bring help early. This activity by the rest of the team deserves a lot of credit for Amare's looks. 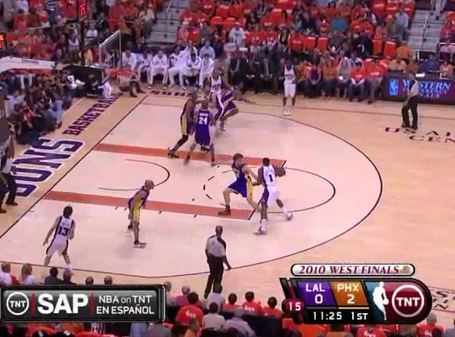 Twice the Suns gave Amare the ball on the right side and cleared out -- something we rarely see a Phoenix team do. This works especially well with Frye on the court. Even if he's not hitting shots, it brings Odom to the top of the key so Kobe is the closest weak side defender and he was too slow coming over to contest Amare's reverse layup.

What's not shown here is the Dragic/Frye pick and roll that was run on the left side early in the clock, which forced the defense to react and left LB open at the right arc as Amare flashed across the lane for the entry pass. These types of actions are very important to getting Amare the ball in position. We've all seen the Suns struggle over the years with simple entry passes when there's not some other activity like this preceding it. 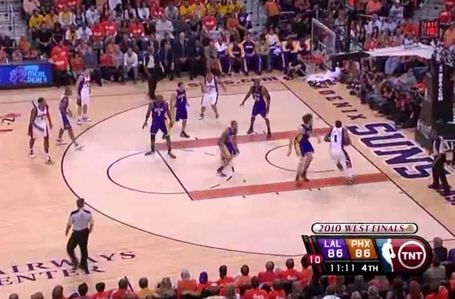 Here the Suns reward Amare for running the floor and getting into early post position against Odom. Nash finds him and Amare goes to work before the rest of the defense can get into position to provide help. Another important strategy to get Amare one on one looks. 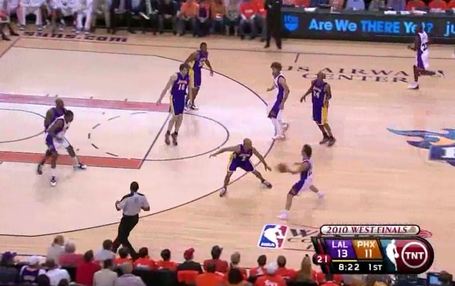 Late in the game the Lakers were forced to go small when Odom fouled out. The Suns stayed with their big lineup (Robin), which forced Gasol to guard Lopez and Artest to guard Amare. Twice the Suns went right at this mismatch and Amare was fouled once and score once in the final two minutes as a result. 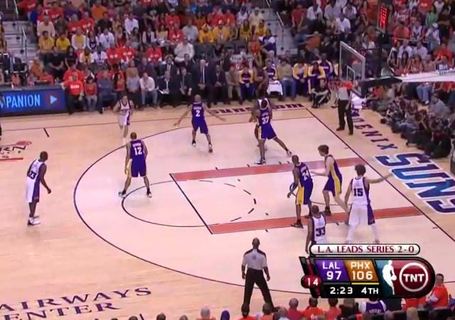 The classic late-game Nash/Amare high pick and roll. What I love about this play is the spacing of the rest of the guys and the way Nash and Amare run Fisher off the screen twice before attacking down the left side of the lane, away from Robin's man. Even though Gasol was sagging off the screen, he had to try and hedge over to stop Nash, which gave Amare a wide open lane. 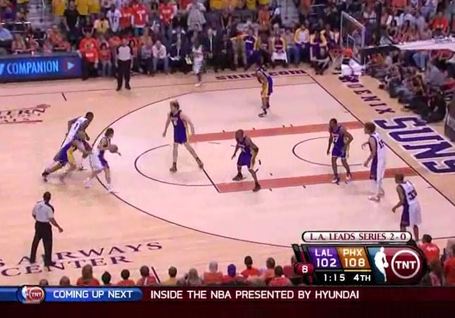 Here's one example of great Laker defense. Amare runs to the rim and Steve lobs him the ball for what looks like an easy two points. 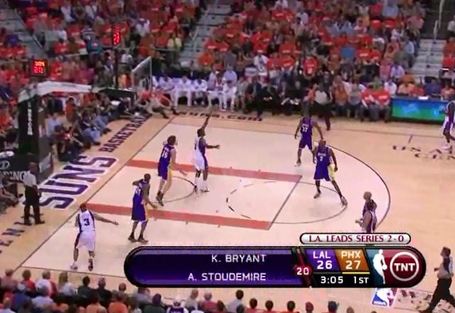 But by the time Amare caught the ball, dribbled once and went up for a shot there were two Lakers contesting his shot. 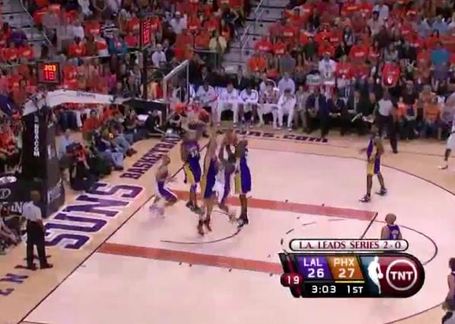 When the Lakers (or any other team) are effective against Amare, they are clogging the lane, standing straight up and giving him little room to operate. The Suns obviously are looking at ways to occupy those help defenders as noted above.

One thing we can expect in tonight's game is the Lakers to overload on Amare and pre-rotate a help defender. Amare will need to put on his playmaker's hat as he did at times against the Spurs and Blazers. The rest of the league (media) hasn't seen the progress Amare has made with his decision-making and tonight might be his chance to showcase that.

It won't be enough to simply pass out when he sees two defenders between him and the rim. Amare will have to force the action and draw the second man and then kick it out to an open teammate. Just like it took a team effort to work without the ball and distract those help defenders in Game 3, tonight the Suns can't afford to stand around and watch Amare with the ball, either. They need to be moving to open spots and giving him good, easy passing lanes by cutting into the lane behind the help defender.