I wrote that last night after Game 5 and I am even more convinced of it today after seeing a loose, confidence and focused team as they prepare for the next challenge - an elimination Game 6.

To set the record straight, Coach Gentry had eaten Grilled Artichoke earlier in the day and not "fried avocado" as reported by TNT. The media room buzz was the there was some kind of mayonnaise dip that could have been the culprit. Alvin did not feel he was intentionally poisoned.

Here's what the guys had to say:

Jason is a stand-up guy. You can hate his occasionally blown plays but you have to love his attitude and desire to win.

"I watched the game film about two or three times and I watched that play over about a hundred times, probably got about a good two hours sleep last night so it was tough. You have the highest of highs and then you've got the lowest of lows but that's basketball."

Mood still the same as Game 1. We've not lost any confidence. No one is pointing any fingers. We're looking forward to Game 6 tomorrow.

Asked about how his team mates reacted to that final play:

"Steve's saying we don't point fingers even though I take all the blame. I know I should have boxed out, I boxed out the entire game besides that one play so I'll take the blame for us losing but that shows you my teammates, how supportive they are."

First technical in NBA. Cursed at each other in Slovenian. Sasha and Goran never played together on the same team but practiced 15 days together on the Slovenian National Team before the coach dismissed him.

Leading up to the double technical, Goran said Sasha pushed him and was talking trash to him and then was walking towards him saying things which prompted Goran's reaction.

Goran on the matter:

"He's just a different type of player. He gets into you. I know in next game I just have to be calm. I know I make a mistake but nothing else."

"I know he want to guard me and I want to play against him so it's just a huge rivalry between me and Sasha and that's all."

"No, we didn't go for coffee and this kind of stuff."

"My confidence is very high right now and I just want to play."

Did he get under your skin? "Maybe a little bit but like I said my reaction was not so good. I know that next game I have to be more calm. I knew that I can penetrate if he going to guard me, I can penetrate every time with no problem."

Asked if Sasha's issues stem from being dismissed from the National team, Goran said maybe it is, maybe it's not but, "he wants to demonstrate he's better than me and I want to demonstrate I'm better than him so it's just a rivalry."

"Everybody wants to be better than somebody." was the best answer Dragic could give for Sasha's issues with him. I love this answer.

"I just want to play basketball to get me personal better basketball play and I am going to do everything it take to help my team win."

Zoran is 20 years old and plays is a combo small forward/shooting guard hoping to make it to the NBA, "I try every day. This is my dream to come in the NBA. I want to be the other brother like Gasol in Spain. We like to be Dragic from Slovenia."

I asked Zoran about the dust up between Goran and Sasha and he said it was just basketball but, "Me personally, I don't like Vujacic because he's like dirty and that stuff but we play basketball these stuff happens all the time." 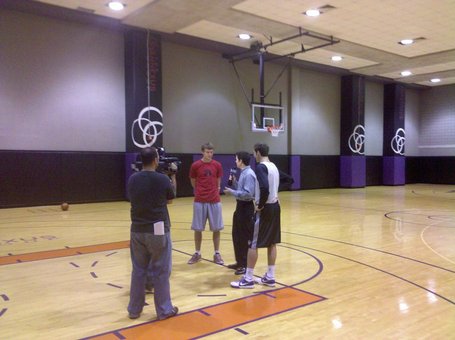 "Every time you go into battle you have to have confidence but nothing is given to us, we have to take it."

Reminded that Game 6 could be his last game as a Sun in Phoenix, "If we don't win, it's possible...You never know. It's going to be an interesting summer. It's going to be very important for myself and my family so we've got to make a great decision this summer."

"We didn't quite get it going offensively....They have a hard time guarding me out there so we've got to take advantage of it."

"The only thing Alvin said was he's going to give me the ball more so with that being said we're going to take advantage of the match-up with myself and Gasol."

"There was opportunities. Our offense was a little stagnant where we didn't quite take advantage of situations but we played well enough to win. We had a great shot at winning the ball game but just due to the last play there we lost."

On being on the bench for the final Lakers possession: "It definitely didn't feel good. I kind of thrive on being in there, getting that last rebound or getting the last blocked shot so you know it didn't work out that way."

On the Suns' confidence: "Even in Game 2 at the end of the 3rd quarter we were tied up with them in LA and then we played another good game in LA so we definitely think we can beat them in LA."

On Robin's reduced minutes in the past few games: "I think that's a testament to how deep and how skilled our team is. We have a lot of different people that can step up."

Robin was in a good mood. Jovial even and said he might attend the Phoenix Comicon Convention going on across the street from USAC at the Convention Center.

Another Coach Nick break down: