In the immortal words of Norah Jones and Ray Charles, Here We Go Again.

I would bet my house (with mortgage) that both teams are tired of talking about it and just want to get this game underway.

The ever verbose Gregg Popovich said, "Anybody thinks about the past is wasting their time...Anything that's gone on in the past, win or lose, is going to have nothing to do with this series."

Popovich was complimentary of the Suns' improved defense and balanced attack. He's frequently mentioned the Suns being the best three-point shooting team ever (which I think isn't quite true, but can't confirm/deny right now and really don't care enough to waste too much time finding out).

Asked by yours truly if this would be a faster-paced series than previous Sun-Spurs meetings, Pop said, "I have no idea."

Asked a follow up by the same tenacious questioner if they would prefer to slow it down, he said, "We can't go as fast as they go. We're not built that way."

Coach Gentry had a pretty funny quote talking about the history and what not. He compared the Suns futility in beating the Spurs in the playoffs to the early 90s Bulls trying to get past the Pistons. When someone remarked if that made the Spurs the "Bad Boys," he just laughed, "Nah, they're not the Bad Boys, come on. Tim Duncan as a Bad Boy? I don't think so."

It is an interesting point as we consider just how evil the Spurs really are. Sure, they've kicked the Suns' ass and have gone on to win a handful of rings, but this 2010 team are no Bad Boys. They are smart, talented and they will play hard and execute. But this isn't a physical Spurs team anymore. Richard Jefferson and Tony Parker aren't going to be picking up any Flagrant Fouls. If anything, Channing Frye is more physical and more likely to deliver a hard foul than Matt Bonner or Antonio McDyess.

Just look at these guys?

Tough guys? I don't think so. The Suns ended the hatred of the Portland fans with their "dirty" play. Don't be surprised if, when this series is over, it's the San Antonio faithful complaining about a cheap shot on Manu's nose or Amare's vicious elbows.

So both sides are downplaying the past, but you KNOW that if the Suns should win, there will be lots of talk from Steve and Amare about "getting over the hump." And that makes the Spurs the hump. Which is kind of funny. Or just stupid. Not sure.

I had two big questions about the Spurs going into this game. I got answers from the ever-knowledgeable Tim Varner of Spurs blog 48 Minutes Of Hell:

Duncan is old. He's gets tired. Sounds glib, right? It's true. The more rest he can get between games, the better.
2. Why did Blair only average 9 mpg in round 1? Will he play more vs Suns?
DeJuan Blair is a wonderful young player, but he clogs the lane when playing alongside Tim Duncan or Antonio McDyess. Because of this, he more or less plays when Tim Duncan is on the bench, which, in the postseason, is not that often. Combinations of Blair and Bonner are more effective for San Antonio.
Having said that, the Suns are a poor defensive rebounding team. DeJuan Blair could be a menace against the Suns.
That probably sounds like low hanging fruit for the Spurs, but the question of how many minutes Blair will play in this series is still anyone's guess. Why?
Well, there's what I said above. And then there's this: The Spurs will kill themselves this series to play the best possible transition defense. Their M.O. is to limit transition baskets and easy, transition three point attempts.

In practice, this often means sacrificing offensive rebounds for the greater good of getting back on defense. Blair is not great at getting back in transition because he loves to roam the offensive glass. It will be interesting to see how Popovich (and Blair) approach this issue.

Good insight there. Duncan is indeed old and will in fact wear down as the series progresses.

On Blair, that's also a great point. He can't shoot from outside, so he and Duncan on the floor together isn't a great combo and Tim is playing big minutes. As for Blair and Bonner together? I'll take my chances with Frye and Amundson.

If the Spurs are focused on getting back in transition, neither team will get many second chance points and you know what? That favors the Suns, who are a better offensive team and are more vulnerable to giving up easy looks off put-backs. Advantage, Suns.

For more on this series, check out my podcast with Sports 620 KTAR:

KTAR.com - Podcast: Suns vs. Spurs playoffs preview
Bryan Gibberman from Sports 620 KTAR and Seth Pollack from BrightSideoftheSun.com broke down the Suns and Spurs series while touching on the other matchups. The guys differ on how they see the series with the Suns and Spurs ending up. 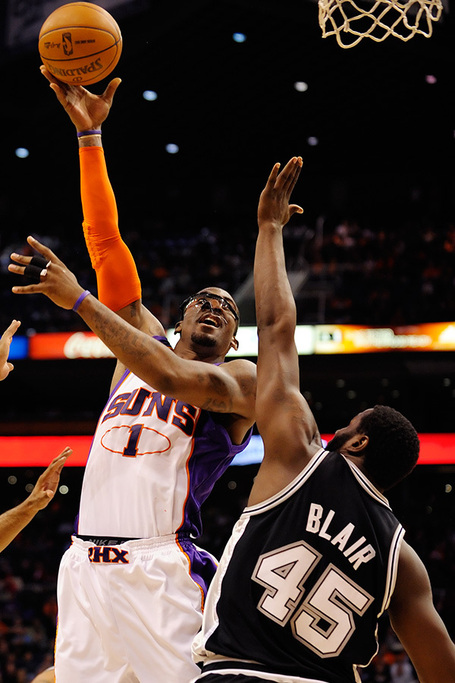 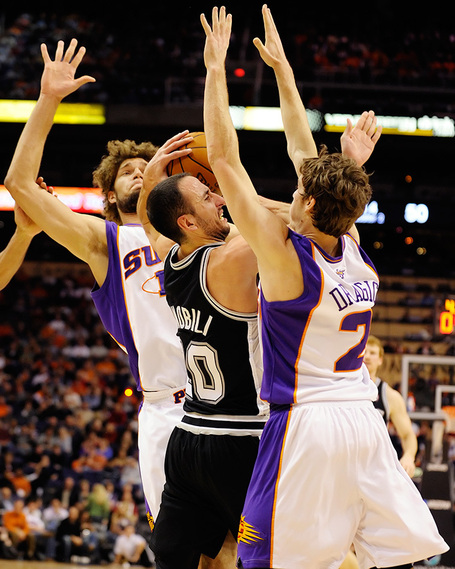 Hey Manu. Have some defense!

We'll see your Tony Parker and raise you an Earl Clark!