Share All sharing options for: Break Down: How Phoenix Suns Defended Tony Parker

In Game 2, Tony Parker scored 20 points on 8 of 14 shooting and yet the Suns defended him well.

Going into this series, you will remember this scouting report we put together on Parker:

This was the Suns game plan Wednesday night and it worked, except Tony's shot was falling which I don't expect to see happen every night.

Here's how his pick and roll possessions break down according to the video from Synergy Sports.

Coach Gentry talked about how his team approached defense, "These guys are starting to take pride in their defense. They're really disappointed that San Antonio shot what they shot the other night. 44 (percent) is where we had all the playoff teams, and we'd like to try and stay there but they got off to such a good start that we weren't able to do that."

(Disclosure reminder: We've been provided a free account by Synergy).

Going Under the Screen

Four times the Suns went under the screen or sagged off and gave Tony space and all four times he nailed the mid-range jump shot as he did here. 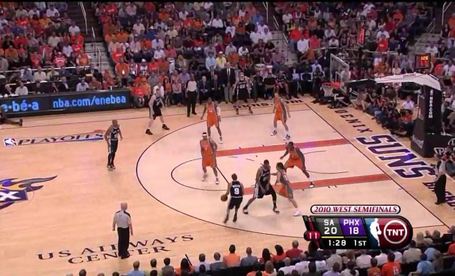 Early in the second quarter, Frye "soft showed" while Dragic fought through the screen and stayed with Tony all the way into the lane and blocked his shot attempt (as shown above). Dragic wasn't credited in the box score for a block for some reason.

Going Over the Screen

Once, early in the 3rd quarter, Nash went over the screen and Amare sagged off with the roll man and Parker of course got into the lane and hit an easy floater.

Then in the fourth quarter, after watching Parker hit his shots, Gentry switched up their coverage with great effect.

In the best defensive possession of the game, at about the 10 minute mark of the 4th quarter, Amare quickly came out on the screen and trapped Parker and forced him well outside the three point line. The Suns' rotations behind the trap were beautiful.

They swung the ball around to Parker and tried to run the same high screen and roll and Amare again trapped Parker, but this time it was late in the clock and the Spurs ended up throwing the ball away. 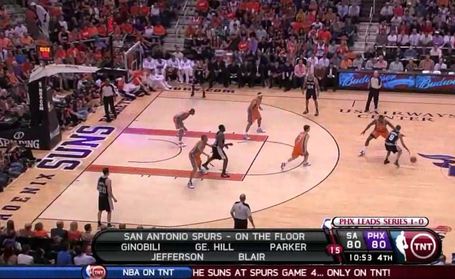 A few minutes later, the same thing happened. Amare trapped the ball hard and Dudley anticipated the pass and got the steal, which was a huge play at that point in the game.

On the last Parker pick and roll of the game, the Suns were up 105-97 with 1:19 to go. This time, the Suns screwed up. Amare trapped but retreated too quickly to recover into the paint, which left Parker WIDE open for a long two, which he missed. Suns caught a break on that one.

Not The Same Old Suns

When people talk about the Suns playing better defense, this is what they mean. The game plan to go under those screens was solid. Tony was just on fire with his shot (4/4), which won't happen in every game. Then later, when they needed those stops more, the Suns sprung the trap to great effect.

Two things that stand out are Amare's ability to execute the trap without fouling and without letting Parker blow by him. In years past, this just didn't happen. The second is the Suns in-game adjustments. Throughout the season, the Suns defended the pick and roll the same way every time. They trapped, rotated and recovered but like any defense, it can be exploited.

Parker had a great shooting night, but the Suns were extremely effective in their half court defense at keeping him out of the lane and off the free throw line.

It is great to see Gentry and the Suns able to execute different coverages throughout the course of the game, but they are still not doing anything too complex, "We still are very simple. We either do this or this. That's it. We really don't get into anything else. We've got two things we try and do against it and that's basically it, and we try and get good at those two things."

If you are interested, there's some great stuff at the beginning of this audio clip of Gentry talking about Gregg Popovich's style and what Gentry's learned from him and other coaches. Alvin also talks about his love for Grant Hill, about playing Jared Dudley when Terry Porter wouldn't and about his coaching style with Amare.