Phoenix Suns Hot Links: Only The Smoke Monster Can Save The Spurs

Share All sharing options for: Phoenix Suns Hot Links: Only The Smoke Monster Can Save The Spurs

Things are heating up here in Phoenix, and by that I mean the outside temperature, which is now over 90 and will stay that way until October. The good news there is that the snow birds will leave and us Desert Rats can go back to sweating our summer away without the distraction of malodorous invaders who for whatever reason smell worse than the locals.

And speaking of chasing the smelly visitors out of town, how about that 2-0 butt-kicking the Suns have going?

I realize that there's a danger in over-confidence from a karmic standpoint (I can assure you the Suns players do not share my bravado), but there's just not a valid basketball argument I've heard anyone make for how the Spurs get back in this series.

None of those pundits who picked the Spurs have said anything to convince me that the Spurs will win 4 of the next 5 games, let alone more than 1 of the next 3.

The confidence in the Spurs is more mythical than logical, as if only the Smoke Monster can keep the Suns from escaping the island of doom. 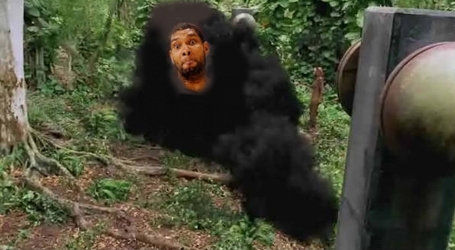 A massive brawl instigated by Leandro Barbosa that results in suspensions to Dragic, Frye and Collins? Nash developing a sudden rare leather allergy? Amare slices his hand while cutting an apple?

That's really all that can happen at this point for the Suns to lose the series -- a freak series of events. Barring that, this series is over.

This might be the funniest thing I've read in the last 28 hours...Oh how the tables have turned

No More Mr. Nice Guy | Pounding The Rock
This series has been nothing short of ridiculously fluky. And yes, I mean to take away from what the Suns have done so far. How did the Suns win Game 2? Offensive rebounds and Channing freaking Frye. Offensive rebounds are greatly a matter of luck. If you have played the game, you know this. 95% of the time, the defender will get the best position for a rebound, leaving you, as an offensive rebounder, a few options.