Share All sharing options for: Dragic Leads Suns to Improbable Win Over Spurs, 110-96

Tonight, your Phoenix Suns faced an uphill challenge versus the San Antonio Spurs. They were playing in San Antonio. They were facing the big 4 of Manu Ginobili, Tim Duncan, Tony Parker, and Gregg Popovich. For three quarters, the Suns were dominated. The Spurs defense swarmed Amare Stoudemire and Steve Nash. San Antonio led by as many as 18 points and made shots. Meanwhile, the Suns struggled to find their rhythm. They missed shots and couldn't dictate the tempo of the game. Not only were the Spurs controlling the game, it didn't look like the Suns were going to cut into the lead to make it respectable. But in the immortal words of Alvin Gentry: "It's a long game, guys, OK?"

In the first quarter, the Suns shot 38% and tallied 19 points. They were out rebounded 12-9. Amare Stoudemire shot a pathetic 0-5. While the shots refused to fall, the Suns scuffled on defense, allowing wide open looks to the Spurs and looked Lost, confused, and disoriented. The energy was there -- perhaps too much. Phoenix forced shot upon contested shot and, for the life of them, couldn't get anything to fall. Meanwhile, the Spurs sported a balanced scoring attack, as 7 players hit hoops in the quarter. The Spurs led on the glass 12-9 and dropped in 5 of 9 from the free throw line while outscoring the Suns 10-6 in the paint.

Things grew worse for the Suns in the second as the Spurs took off on an 11-2 run, pushing their lead to double digits before the half. Yet the Suns chipped away, managing to find their shooting stroke as Leandro barbosa and Jason Richrdson chipped in 3s and Amare Stoudemire, Grant Hill, and Channing Frye shot a combined 6-8 while yanking down 8 rebounds. Problem was, Manu Ginobili was just getting started. The Argentinian with the weird nose contraption dropped in 7 while DeJaun Blair used his linebacker skills and impressive girth to toss the Suns bigs around, snagging 4 rebounds in the quarter.

In the third, Ginobili dominated Jason Richardson and Co., dropping in 10 points while us Suns faithful felt our stomachs drop ... "There he goes ..." But Jason Richardson and Steve Nash kept the Suns within striking distance, with 7 and 10 points respectively. Threes by Channing Frye and um, um, that pasty looking kid -- Dragon something --  helped to close the quarter down by only 1, 72-71. The Spurs had begun to go cold (with the exception of Manu), and it became apparent that if the Suns could lasso Ginobili and get a run going, the ball game could be theirs. Did you feel it?

Then came the faithful 4th quarter. It went a little something like this:

Seriously? Are we exorcising demons? Are we slaughtering the monkey on our backs? What in tarnation ... is going on? Again your Phoenix Suns beat the San Antonio Spurs and again we can look at the box score and wonder how the hell it happened. It's not supposed to work like this. The Suns could not dictate the tempo. The Suns could not look to their go-to veterans such as Amare Stoudemire and Steve Nash for that much-needed certain something to bring home a win. The Spurs braintrust decided to take them out of the game. Pressure them, double team them. Make someone else win the game. So much for that strategy.

The Suns didn't dominate the glass nor did they shoot for a high percentage for much of the game. If it were 2005, this game would have been an embarrassing defeat. We all know why. But it's 2010 and the Phoenix Suns have the best bench in the freakin' NBA. There, I said it.  So good that STAT and JRich rested comfortably in the 4th quarter while Jared Dudley, Channing Frye, Grant Hill, Steve Nash, and the Slovenian Sniper took care of business down the stretch to finish off the San Antonio Spurs.

The Suns bench went a combined 18-29, with 15 rebounds, and 10 3-point field goals, while the Spurs bench went 9-22 and totaling a -20 on the +/- scale. The combination of Nash, Dragic, and Barbosa turned in 15 rebounds. The beauty of the 2010 Phoenix Suns is their versatility. They can win in so many ways, they can change up on the fly and challenge any defense that is thrown their way. We saw it tonight. And on any given night, nearly anyone can prove the hero. Two nights ago, it was Jared Dudley. Tonight, it was Goran Dragic. Sunday could be Nash or Amare or JRich, Frye, Dudz again, you name it. Try it, San Antonio, try anything you want, the Suns will hit you at a different angle. And best of all, they won't quit. They'll keep coming and coming and coming until the final buzzer sounds.

Cheers Mates, this is sweet. Sunday could be even sweeter. 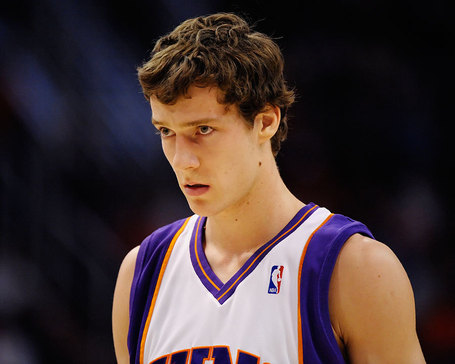 "I work very hard for this moment so I am very happy for this."

"I think it's safe to say that may have been the best fourth-quarter performance I have ever seen in a playoff game ..."

Alvin Gentry (of guess who):

"During halftime, I was talking with Coach Gentry and he told me I have to be more aggressive and drive the lane. When I came back on the court, I just did what he told me."

"Everything we tried, it was a bucket and it was demoralizing. We're going to have to have a perfect game."

No NBA team has ever come back from a 0-3 playoff deficit.