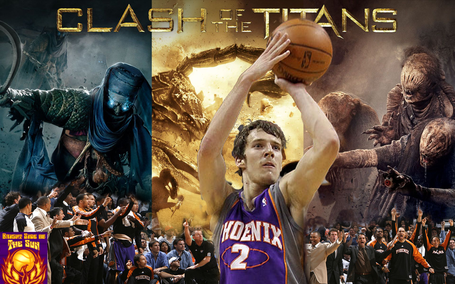 Zeus: Perseus has won. My son has triumphed.
Hera: A fortunate young man.
Zeus: Fortune is ally to the brave.
Thetis: What a dangerous precedent. What if there more heroes like him? What if courage and imagination became everyday mortal qualities? What will become of us?
Zeus: We would no longer be needed. But, for the moment, there is sufficient cowardice, sloth and mendacity down there on Earth to last forever.

As sometimes happens in sport, we witness mythology in the making.

For one night, amid the aged titans of basketball that have waged playoff wars for over a decade, a mere mortal, clothed in youth, rose above the gods of the day to defeat the monsters of the modern era, the NBA equivalent of the Kraken.

What is the Kraken? It's the starting lineup of the San Antonio Spurs, 4-time NBA champion Tim Duncan and his squad full of multiple NBA champions. The guys that come at you and keep coming at you. It's the Alamo Dome full of Spurs fans, 36,000 arms pounding and 36,000 legs kicking and 36,000 eyes staring you down with disgust for your presumed inferior basketball knowledge and 18,000 mouths wanting to eat your soul.

Goran Dragic shook off his mortal spirit in the second half, scoring at will against the gods and monsters of the Spurs on a wide array of treys and layups. In the final quarter, he scored 23 points to overtake the Spurs and win on their homecourt, humiliating the Kraken, the Fundamental, and the Popovich.

This great achievement reveals that Goran Dragic is no mere mortal. He is blessed by those basketball gods. Moreover, he himself may yet lay claim to that hallowed divinity.