I am not sure there's anything left to be said about Goran Dragic -- but I'll try.

His performance in San Antonio to single-handedly destroy the Spurs in Game 3 will go down as one of the great playoff performances in Phoenix Suns history. He was incredible. Beyond words.

Of course, it was a GREAT team effort, as well. I commented at half time how impressed I was with this Suns team to have weathered yet another slow start and battled back into the game. Even if the Suns were to lose Game 3, it would have been a victory of will and would have carried over to the next contest.

In the third quarter, when Ginobili went nuts and hit a number of incredible shots, the most I could hope for was the Suns staying within 10 until Nash and Stoudemire came back after their rest and they somehow tried to steal the game late and at least make the Spurs work for it.

And then Goran Dragic and Leandro Barbosa happened. These guys, who were complete non-factors in the first two contests, finally got it going and took advantage of a Spurs defense that couldn't keep Roddy Beaubois out of the lane. I have no idea why Popovich thought his bigs could handle switching on to the Suns guards as if they were the Atlanta Hawks' Josh Smith and Al Horford, but the Suns took advantage. He backed off that tactic, but not before the Slovenian flame had been lit.

Before this series started, I thought that the Suns depth would wear down San Antonio and that the job of the Suns reserve guards was to keep attacking and not give the Spurs starters any reprieve. That was the game plan against an older, slower, thinner front line and in Game 3 it paid off in spades. Wow.

I fully acknowledge my pride in ego in both seeing the potential in Dragic early and sticking with him through his first few (horrible) months as a pro. For that reason, as well as my fondness for him as a person, I share some small measure of pride in his historic performance last night.

He always struck me as a player with a great skill set and the right attitude to be successful in this league. His story is one of having patience with young players. Very few come in to the league ready to be great and many are drafted on to bad teams where their rookie numbers prove deceptive. You have to look at the full picture and consider the entire context of a player -- his ability, his personality and his desire -- before passing judgment on his potential.

The Phoenix Suns organization, led by Steve Kerr, has proven how skilled they are on that front. Where would this team be without Jared Dudley, Lou Amundson, Goran Dragic, Robin Lopez and Channing Frye? They certainly would not be up 3-0 on the Spurs.

Before moving on to the Goran Dragic retrospective love-fest, I want to take a moment and give a shout out to Leandro Barbosa's defense. If you go back and watch the fourth quarter, pay attention to how active he was and how he was fighting like a man possessed. As much credit as the Suns bench deserves for the points, it was still their active and aggressive defense that created the game-winning separation.

Goran Dragic Through the Years

Our first introduction to a very pale young man.

Goran Dragic Speaks - Bright Side Of The Sun
Here's Goran's first interview with the Phoenix media, on Sport 620 KTAR. Listening to this again, you hear the same confident, happy kid we've come to know and love.

Phoenix Suns play....basketball!!! - Bright Side Of The Sun
This kid is very smooth with ball in his hands. He glides down the court and dishes the ball like he's serving up a short stack of buttermilk pancakes. Defensively, he's adjusting to the tighter NBA rules for perimeter contact and the speed. He simply could not keep Acie Law in front of him. He's a work in progress but I already would much rather have the ball in his hands then in Barbosa's or Strawberry's facing a hard trap or an aggressive defender. Next summer's agenda includes improving the jump shot. And a tan.

Suns VP David Griffin Talks about Dragic - Bright Side Of The Sun
A lot of Suns fans are ready to give up on this kid but the reality, like it or not, is that he will be part of this team for quite some time. Griff had some candid things to say about the young Slovenian point guard.

My first interview with Goran.

Goran Dragic interview: The future is now - Bright Side Of The Sun
After Suns practice, I stood with Coach Gentry for a few minutes and watched as Dragic got in some extra work with Suns assistant coach, Igor Kokoscov. "He works hard. He works his ass off." Gentry commented, "He'll be a different player when he comes back from the summer league."

Summer League - Bright Side Of The Sun - For Phoenix Suns Fans
If any of the Summer Suns came out a winner, it was without a doubt the young Slovenian. It was possible to see his confidence grow with each game. As Phoenix Stan has pointed out, this is the first time in his career that Dragic has been asked to be "the man" on the court and it's a role he's still growing into. Clearly, the Suns are pushing him to be the team leader when he's running the offense. While he has yet (even against the limited competition of Summer League) to demonstrate he's got what it takes to be the heir apparent to Steve Nash, he definitely showed signs of improvement.

And finally, my favorite Goran moment of this season. Not his career-high 32 points in Utah and not the way he took over several games in the fourth quarter. My favorite was the balls he showed in trying to track down and contest Derrick Rose at the rim. Even though Rose dunked on him, he proved he was competitor in that game. Those things eventually pay off and we saw it last night in San Antonio.

Derrick Rose Incredi-Bull as Chicago Slams Phoenix - Bright Side Of The Sun
Dragic was a good sport about it but he clearly wasn't happy that he didn't get high enough to get the block. He's a nice guy but the kid's also a baller and doesn't like getting beat. It is unfortunate that he will be in Rose's poster but hopefully he will get some credit for even trying to stop the play when this gets replayed 300 times tomorrow. 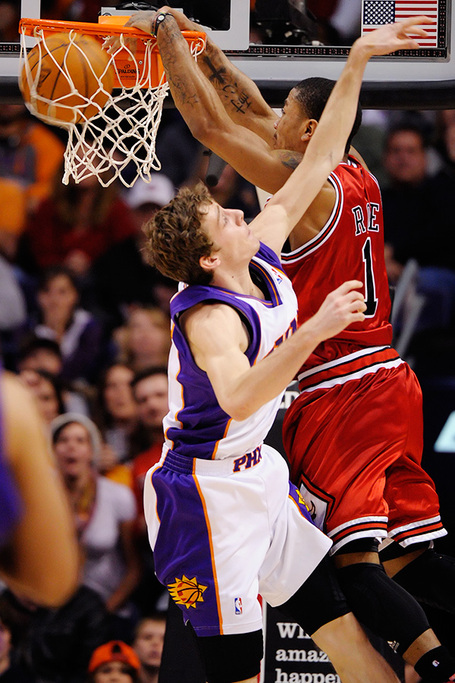 Links from around the league