"The universe has turned."
-Alvin Gentry

Last October none of us in our wildest dreams would have believed that the Phoenix Suns would end up here. 3-0, on the brink of eliminating the San Antonio Spurs in the Western Conference Semi-finals. The significance of a victory tonight has broad reaching effect. There's an overused informal term that describes the results of a Phoenix Suns game 4 victory: sea change. I'll spare you the extended origin, which is Shakespearean, because I'm sure most of you feel the same as I do about much of Shakespeare's work. Brilliant? Yes. Entertaining? At times. But NBA related, not so much. But we know we've been pwned, these Spurs have squashed our dreams many, many times. We cannot erase history, but we can overcome it, start a new chapter. Possibly tonight. But you didn't come here for literature, you came here for basketball. I'll get to it.

We often discuss keys to victory. At time we get all X's and O's on you. Amare establishing himself in the paint? Sure that helps. Jason Richardson and co. extending the defense to stop the 3, OK. Works as well-in theory. Spacing to help Nash create? Sure. Pushing the tempo? Absolutely. Pick 'N Roll D, switches, rotations. Or...just giving the damn ball to Goran Dragic and let him go Slovenia on the Spurs. That worked a couple nights ago.

There may not be any specific formula for victory tonight other than what is mental, psychological, emotional. Establish tempo, hit the open wing, make shots, take it to the hoop. If that doesn't work, adjust and make something else work. The Suns have the personnel to make it happen. In Game 3 the Spurs tried everything and anything, and for a bit, it did work. Then it didn't, just ask this guy: 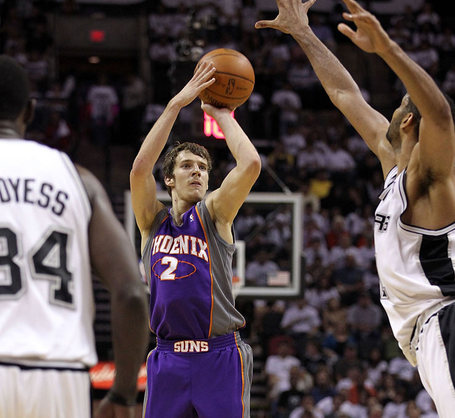 1 : something to which a person or thing is destined : fortune
2 : a predetermined course of events often held to be an irresistible power or agency

Could it be? Is it finally time? Many of the Spurs faithful are talking about the Suns scaling mount San Antonio and conquering the summit, finally. But don't believe this is over. Don't believe this will be easy. (I know you don't). Because the Suns have 48 minutes of hell left, maybe more, to finish this. And it won't be quiet, clean, simple. Blood will have to be spilt (hopefully not in the literal sense), sweat exuded, tears to spent (hopefully no one cries in public unless it's Manu and Tim).

History is one of those weird constants we often turn to when the future is uncertain. In this case, it is on the side of the Phoenix Suns and us faithful:

there's also a situation where a man didn't walk on the moon until 1969."

I love Alvin Gentry. How can you not?

So for the time being, I urge you all to ignore certain history, while recalling some. Consider us all the wounded, the angry, the Purple and Orange that are out for revenge, vengence, and other things that equate to the same thing-a victory tonight over the San Antonio Spurs. Tonight there will most likely be a new hero. Perhaps a scrappy second unit member diving for a loose ball, hitting several 3's or maybe an aging starter playing his balls off, determined to climb a mountain to catch the view on the other side of a summit he's never witnessed before.

The game thread will be up early Suns fans, let's get jacked up and root our squad to victory from afar!

Bickley: Al McCoy nearing the end of the line