Share All sharing options for: The Earl Clark 2009-2010 report card

This is the second in a series of Suns player evaluations. We're going back to school using the old A-F grading system, weighing numbers, opinions, and all that cannot be captured in a statistic -- the value each player added to the Suns improbable run to the 2010 Western Conference Finals. 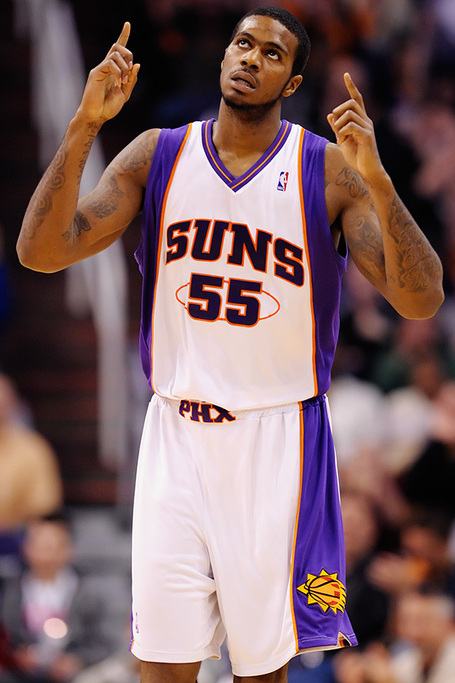 For those of you that don't know, there is a kid on the Suns that goes by the name of Earl Clark. We drafted him in last year's draft with the 14th pick in hopes that he would help fill the shoes that were left when Shawn Marion cleaned out his locker and the big ego came to town. Clark was touted by the Suns as an athletic big man who could play SF or PF and guard multiple positions on the floor (again, think of a Shawn Marion type with a better outside shot). It was no secret leading up to the draft that the Suns were locked in on Clark and were going to take him.

In theory, this was a great pick. Clark was a top 5 talent who slipped a bit due to questions about his character and drive. The Suns, however, weren't deterred by the question marks as they had successfully drafted question mark characters in the past ... Amare Stoudemire ring any bells?... and saw that he could possibly fill a role with the questions of Hill's health, Dudley's ability to give really good minutes off the bench and Amundson's limited offense surrounding the Suns wings. Without wavering, the Suns went ahead and selected Earl Clark to sport the old purple and orange even though there were some other pretty good options on the board (but we won't get into that).

Earl Clark first played for the Suns in last summer's Vegas Summer League. Unfortunately, I was unable to attend, but from what I heard, he held his own on the defensive end even against the more talented brother of our own Taylor Griffin (really one of the reasons we brought him on was for his ability to defend) and had some nice plays offensively. It seemed as if he would find time in a Suns system with a coach that tended to give young players good burn and let them learn the NBA game through experience.

I first saw Clark in action at an intersquad scrimmage put on by the Suns for new season ticket holders (my buddy Jermaine purchased season tickets and I was lucky enough to get the extra ticket almost any time his wife didn't feel like going). During the scrimmage, there were two things I noticed. 1) Seeing Steve Nash operate from up close (we were sitting courtside free throw line extended and even had a loose ball into Jermaine's lap) is a completely different experience than seeing him on TV or even from pretty much any non-courtside seat in the US Airways Center. 2) Earl Clark had absolutely ZERO fire. He didn't care. He seemed disinterested -- like he was playing pick-up ball at a local YMCA where he was far better than everyone else. Only thing was he was playing a competitive scrimmage against proven players who were playing hard. That right there said more to me than anything positive that this kid could've done in that scrimmage. I left there hoping that somewhere along the line somebody would punch him right in the face and maybe trigger an Incredible Hulk type 'you won't like me when I'm angry' fire in him that would drive him to at least look like he cared. Unfortunately, that never happened (the best chance as far as I can figure would've been when Lopez shattered the practice court door -- if only good old Earl had been in his way instead of a sheet of glass meant to divide rooms).

During the season, Clark's lack of fire proved to be too much for Gentry to trust him with good consistent minutes. I'm not going to get into stats here because A) I'm not really a stats guy -- more of a judge them by what I see on the court guy and B) he didn't really get consistent run and a lot of his minutes were garbage time minutes, which tend to be skewed anyway. When he did get into games, the disinterest continued. He floated on offense and consistently caught the ball 20' and out. He fell in love with the jumper and rarely took it hard to the basket (although when he was aggressive, we did see glimpses of what he could be as a player ... again, if only somebody would punch him square in the nose). On defense, he proved to be a decent on-the-ball defender but tended to get lost in defensive rotations off the ball.

Clark's game has a lot of positives. He is a great ball handler for his size, is a good athlete, has a good shot, but more importantly has a high shot that he's able to get off over anybody at any time. Also, as I stated above, he's a decent on-the-ball defender. Unfortunately for him, those were all overshadowed by his inability to get his head into the game. Mental toughness and focus were the two biggest drawbacks to him coming out of Louisville and this season they proved to be his downfall. Overall, Earl Clark had a very forgettable rookie season and showed us exactly why teams were so afraid of picking him earlier in the draft despite his physical gifts. Is there hope for the kid? Yes. He has the tools; he just needs to put in the time and catch up to the mental aspect of the NBA game and he'll be fine. I think the best thing for him would be to hit the gym this summer with Jared Dudley. Last summer, Dudley tweeted from Vegas, where he was working out and playing with a lot of very good NBA players (which included All-Stars like Baron Davis and Danny Granger) who brought the best and worst out of each other. Dudley came back with a much-improved game (which, luckily for us, included a money 3-ball that he worked on all summer) and has already made plans to hit the gym and work on other aspects of his game. Being in that type of environment and seeing how hard these players work to improve and how badly they want to win even in little pick-up games could only have positive effects on the young Clark. And ... well ... if it didn't, I'm sure competitive fires would take over in one of the other players and maybe, just maybe, they might punch him in the face and light that fire.