Share All sharing options for: The Jared Dudley 2009-10 Report Card 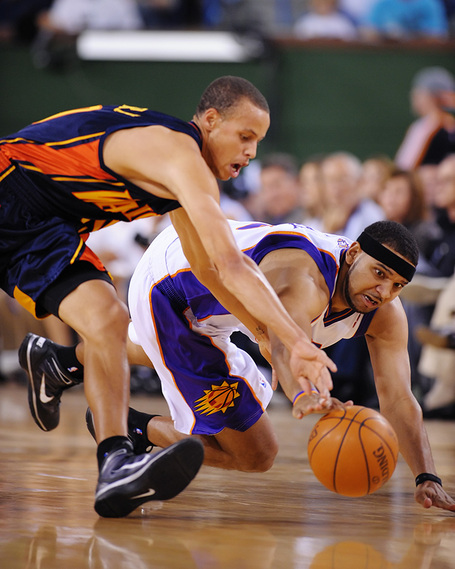 Welcome to the third installment of the 2009-10 Phoenix Suns player report cards. Today we look at Jared Dudley.

Individuals can lead by actions or by words. Some can lead by both, and if you are lucky, you have one or two of them on your squad. The Suns are very lucky, they've got a handful of them. As we continue to evaluate the Suns players this offseason, our next baller is one of those rare cases in that his mere appearance on the court inspires everyone around him. I am speaking of no ohter than The Junkyard Dog himself, Jared Dudley.

Jared Freakin' Dudley. Now that's what I'm talkin' about. Here's a guy that makes it worth being a fan. You hear about guys "leaving it out on the court." That's Dudley. He's why you watch the Phoenix Suns for 82 games. You look to him for comfort when the squad starts to go in the tank. Even if you know that a 6 ft 5 inch role playing second unit guy shouldn't be the pulse of your favorite team, he is. He doesn't dunk the ball, he doesn't make unearthly magnificantly athletic plays. He just gets dirty. He's the junkyard dog, man.

You can make an easy argument that in a lot of ways Dudley was an MVP for the Suns this season. He didn't score 30 a game or dish out 11, he didn't grab 15 rebounds, but he did some other things:

And he talked. A lot. He chattered. He cracked up the locker room and us media types. His JMZ interviews were crazy and hilarious. If Lopez was the moody little brother with a bad temper, Dudley was his antithesis. When there were moments where Lopez was inconsolable or simply silent, I witnessed Dudley on more than one occasion bring Robin to life. Happy, smiling life. In fact I'm smiling right now as I write. He kept the locker room loose, he said the right things when the team struggled to remind us all the one or two straight losses didn't mean the season was over. And it was easy to believe him.

So while we can hopefully look to Earl Clark as the heir apparant to Grant Hill, we can count on Jared Dudley bridging the gap. And while it won't be artistic-he won't jump out of the building like Earl Clark or even dunk a basketball like Grant Hill, we know he will go out and make the most of every moment on the floor. He won't take a second off to think about the after party or the ladies waiting for him after the game. Jared Dudley will be in the moment, defending, scrapping, stroking jumpers, and making the most of every NBA moment he can play.