Share All sharing options for: The Steve Nash 2009-10 Report Card

This is the fourth in a series of Suns player evaluations. We're going back to school using the old A-F grading system, weighing numbers, opinions, and all that cannot be captured in a statistic -- the value each player added to the Suns improbable run to the 2010 Western Conference Finals. 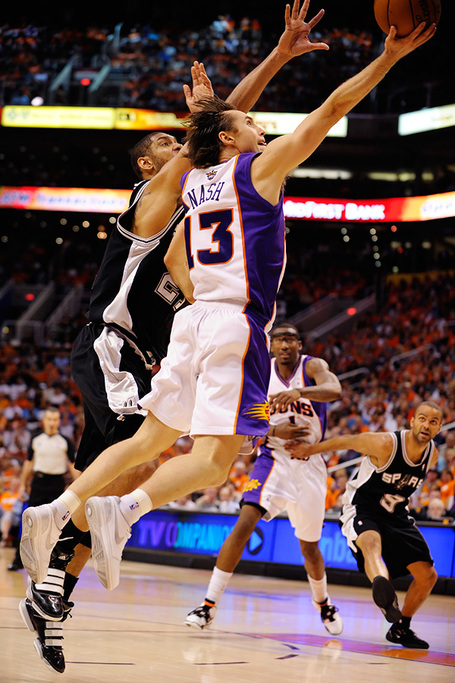 Steve Nash. The name alone carries so much meaning. Whether you're a devout Suns fan or just a fan of basketball, there's not a lot you can dislike about Steve Nash. He is the epitome of team basketball. While at the helm of the resurgent Phoenix Suns squads during the Mike D'Antoni era, he resurrected the "run and gun" style of basketball, executing it to a T. Heck, he even inspired a group of people on Facebook to join the "I Believe In A God And His Name Is Steve Nash" group. What he means to not only us as fans, but to the game of basketball, is insurmountable.

However, we're going to delve more into what exactly he meant to this team.

It's no question that Steve Nash has been the heart and soul of the Phoenix Suns since reuniting with the purple and orange in 2004. While he hasn't always been a crazy, extremely vocal leader (a la Kevin Garnett...emphasis on the crazy), he has no doubt led this team. So, when the Phoenix Suns offered him a contract extension amid a summer when the words "Should the Phoenix Suns blow up the team?" were used as often as a common streetwalker, it should have come as no surprise. Steve Nash is the Suns. The Suns are Steve Nash. I am he as you are he as you are me and we are all together. Or something.

Many people had their doubt about Nash's age and his history for wearing down during the regular season and not having enough gas in the tank for the playoffs. Even more people were wanting to see what we could get in return for him, perhaps young talent or draft picks, and start the team over from scratch. However, Nash wouldn't have any of it.

If there's one thing I know about Steve Nash, it's that he's a competitor. He lives for the game of basketball. And this season, we've seen exactly that. Allow me to provide a list of reminders of just how awesome he is:

As much as it is nearly impossible to put a quantifiable grade on the performance of a man as great as Nash, it can (and must) be done. I have been incredibly impressed with the poise and passion of Steve this season. He played through various injuries and maladies, all the while maintaining his impact on the court. Even with all the statistics that show up in box scores nowadays, you still hear players rave about how amazing it is to play with him. He gets you the ball exactly where you want it. He knows the moves his opponents will make before they actually make them. He is like the chess grandmaster of basketball. He is the Bobby Fischer of the NBA.

I could go recite statistics to you, but Steve Nash means more than that. I could tell you how he once again joined the 50/40/90 club (50%+ FG, 40%+ 3PT, 90%+ FT) for the fifth time in his career. I could tell you that while playing his lowest per game minute average since the 1999-2000 (he averaged 32.8 minutes per game this season), he still managed to lead the league in assists. I could also tell you how he shot an astounding 94% from the free throw line this season, and appears to be in line to relieve Mark Price as the league's all-time leader in that statistical area.

I could go on, but I won't. It doesn't need to be done. Taking into consideration everything he has done for the team and accounting for the (literal) blood, sweat and tears given, it would be impossible for me to give Steve Nash anything other than...