The Life and Times of Trevor Paxton

Share All sharing options for: The Life and Times of Trevor Paxton

While this may be quite a few months late, I was brought on mid-season and immediately started putting my focus toward the slumping (and then resurgent) Suns. I know all of you were wondering just what it is I do with my life when I'm not throwing up articles with lame pop culture references and questionable attempts at humor, so hopefully you can forgive me for my tardiness.

The story begins after the jump...

May as well kick things off from the beginning. I am 23 years old (born June 4th, 1987) in Phoenix, even though I've lived in Tempe for my entire life. I grew up for a few months in an apartment maybe a mile from ASU campus, then moved just (barely) across town. Since then, I've lived essentially within the same square mile for my entire life, minus a 6 month stint in Chile. That 6 month stint did see me held at knife point, gun point, and I saw a car explode literally about 50 yards from my apartment...kinda crazy.

Anyway, let's get back to the point.

I've always been a fan of basketball, playing in a few YMCA leagues as a child. However, since baseball was what all my friends played, I played baseball until I was 15, even though I felt I was better at basketball. By that time, even though I wanted to go out for my high school team, it was too late. I had missed out on my chance to play organized basketball. However, my love didn't die with my inability to play with the much more talented players.

My mom was the sole basketball lover in the house for many years. I remember in '92, when I was the ripe old age of 5 years old, my mom would have Suns games on whenever they were on TV. Even at my young age, I remember the '93 run to the Finals like it was yesterday. I remember watching games, rooting on Barkley, wanting to be KJ, and wishing I could play like those guys did. 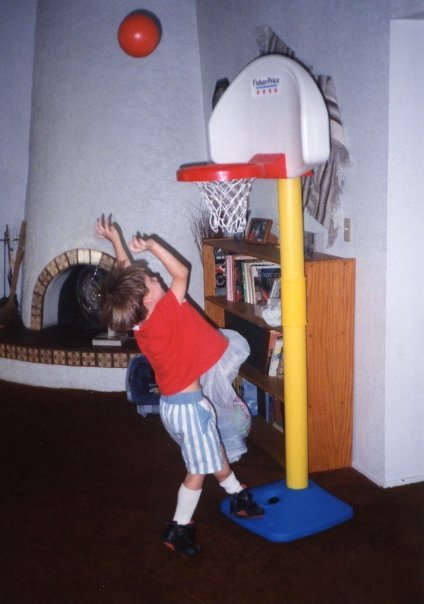 In high school, while other friends were football players and basketball stars, I was a choir kid through and through. Music has been huge in my family, and has been a part of my life since I can remember. I started taking piano lessons at age 8 and didn't stop until I was 16. The first album I ever purchased by myself was Eve 6's self-titled LP when I was a mere 11 years old. The first song that got me into loving music was "Spiderwebs" by No Doubt, which my dad had me listen to while we were reading J.R.R. Tolkien's The Hobbit.

I even attempted to try my hand at writing music, where I "self-released" a self-titled LP. The songs were typical, formulaic, and recorded using Audacity (a free recording program) and a shoddy microphone purchased from Radio Shack. But they were mine. No matter how painful it is for me to hear those songs now, they were who I was. I also play music in a comedy band called Hey Taxi, which is me and two of my best friends just having fun.

I've been in various choirs since my 4th grade year, so it is only fitting that my major be Choral Music Education, where I aim to be a music educator when I "grow up". I'd like to teach at the high school level, go back to school and get my doctorate, and finish off my career at the collegiate level.

And now, since I'm not sure what else to say, I'll throw up a "FAQ" section.

Who is your favorite Phoenix Suns player of all time?

I'm going to have to go with a tie between Kevin Johnson and Steve Nash. Kevin Johnson was just a straight baller, and Nash is what made me fall back in love with basketball. Both were/are true competitors, and both rise above the stigmas so often associated with professional athletes.

How did you get started with blogging?

Well, I've been a member of this site since the start of the 2008-09 season, even though I read the content for the season prior to that. I started out just commenting on various stories and game threads, and then I started posting my own FanPosts. I then emailed Seth and asked if there was any way I could do a couple game previews or recaps, and the rest is history.

I actually keep two other blogs that I update myself. One is titled a[chord]ing to trevor. and the other is Thoughts of a Twenty-Something Mind. The first is a music blog that hasn't been updated since July of 2008 where I did reviews of bands that were currently piquing my interest, interviews with local bands, and talking about whatever I felt like. The other is a more typical "blog"-like blog, where I talk about thoughts I have, and attempt to make them sound good. Or something.

Who is your favorite band?

This question is nearly impossible to answer. I will say that Jimmy Eat World, Weezer, and Dashboard Confessional turned me onto the music I now love, and I will always hold a place in my heart for those bands. Nostalgia usually always wins out in the "favorite band" contest.

What other instruments do you play aside from piano?

Aside from taking piano lessons for somewhere around 9 years, I've played the guitar since I was 17. I can also play a little ukulele, some bass guitar (mostly simple stuff). I also played the saxophone for 2 years, but I quit that in 6th grade because I hated the band director. I can also keep a steady, simple beat on drums.

What else do you do aside from write, listen to music and go to school?

I work for the ARC of Tempe, a recreation center for adults with developmental disabilities. It's basically a big hang out spot, but we do activities to help teach life skills, improve social skills, and overall enrich the lives of the participants involved. I'm incredibly blessed to be able to share my life with these people, and I wouldn't trade it for anything in the world.

That's about all I can think of, and if you have any other questions, just hit it up in the comments section. I'd love to hear 'em.