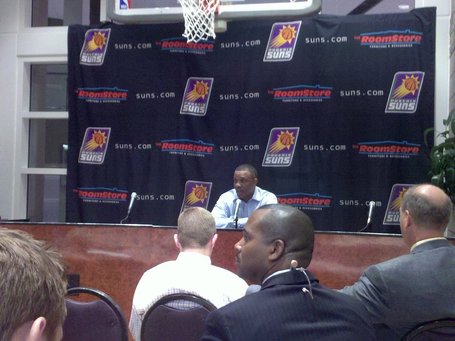 Typically after a draft, the team sends out its General Manager. The Suns sent Alvin Gentry out to talk to the media about the Suns' picks. We've beat the Kerr departure thing to death, so let's get right to it.

In Lawal and Collins, the Suns essentially drafted the same guy. Both right around the same height and both are physical, long defensive players with raw offensive skills. You'd think the Suns are worried about losing Lou Amundson to free agency while facing the potential of losing Amare, as well.

Neither of these guys will come close to replacing Amare's offense, but at least they are big bodies who will be hungry to play in the NBA.

"One of the things we have to continue to do is get better defensively here and I think the way that you do that is get good defensive players. It's pretty simple," Gentry said about the picks.

We'll get a good look at them in Summer League. Or at least at Lawal. Collins had his knee scoped on June 18th to fix a slight meniscus tear, which may prevent him from fully participating in the Vegas workouts.

The Suns likely won't decide until after training camp whether either player will make the roster for next season.

"I think both of those guys have an opportunity to maybe do something. I just think they're very competitive, they play really hard, they'll be great guys to have in practice," Gentry said about their chances before adding, "We expect for them to come in and participate in Summer League and we'll see what happens from there. But we're excited about these two guys. I don't think you can ever have too much size in this league."

Video from draft night via Suns.com